"Who do You Think You Are, Michael Schumacher?"

Just in case you didn't know, Michael Schumacher is the greatest of all time (or GOAT if you must) of Formula 1 racing. He holds the records for most race wins and most driver championships. Unfortunately, after retiring, he suffered a terrible ski accident and remains confined at home. We wish him the best in recovery, and mean no disrespect by talking about the following book that was written when he was still driving at his peak, and was already considered the greatest of all time. Now on with today's blog. 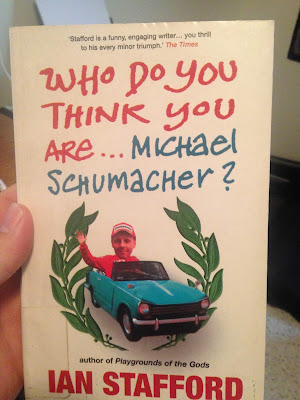 That's the title of  a book I found recently, and if you are interested in finding out how the average person might do trying to drive a Formula 1 car and hanging out with various famous drivers in an effort to learn their secrets, then you might enjoy this funny book. Schumacher is the all time leader in F1 championships and race wins, and at the time of this book was still racing. Apparently one day the author Ian Stafford's wife asked him this question in response to his driving habits. From this simple question (of course you're not Michael Schumacher, and there is no way us normal people can drive like him), came the inspiration to try and beat the F1 champ in a race.

One funny theme in the book is that from talking to these drivers, the writer reveals that before Schumacher came along, the typical English policeman that pulled you over for speeding would most likely have asked "Who do you think you are, Stirling Moss?" Now we know that Sir Sterling is still rather proud of his place in history, and this particular phrase, so having it updated to a Nigel Mansell (F1 champ, Indycar Champ, etc) or Schumacher kind of steals his thunder a bit!

If you or I were to try and beat a real racer, we'd lose by a lot, and most likely wouldn't get anywhere near any famous drivers to even try. However, being a published author with a few connections, Stafford was able to meet and interview people such as F1 drivers Sterling Moss, Jody Scheckter, Nigel Mansell, Jack Brabham, Chris Amon, Niki Lauda, Rubens Barrichello, Juan Pablo Montoya, and along the way actually drove an F1 car, a world rally car, worked for the Williams team at an F1 race, and earned his British racing license with Susie Wolff. Susie was a reserve driver for the Williams F1 team for several years, so certainly has actually driven F1 cars in practice if not in an actual race, which is more than any other woman driver has accomplished in decades. In various escapades, including a hilarious work out session with driver David Coulthard in Monaco, Stafford manages to be an entertaining normal Joe trying to hang with the big dogs, and does in fact get to compare his lap times with the real Schumacher by the end of the year long adventure.

If you like reading funny stories related to F1, then this book is for you.
Posted by robert.a.nixon6@gmail.com at 2:49 AM