While we're all keeping our distance and not playing with cars, I'm continuing to make progress upgrading the trailer. Massive thank you to Chuck for making this all possible.


When we last left the trailer, the walls had been insulated and some preliminary wiring run. A few weekends ago we pushed on with priming and painting the interior. The ceiling panels were painted separately before they were installed so we didn't have to paint on the ceiling.

With the walls and ceiling brightened up, the skylight was ejected and the AC unit put in place. Wires were connected and we were one step cooler to refrigeration.

Yesterday we came back and reinforced some cabinets before securing them to the walls. Next, power was run for a pair of outlets under the cabinets and everything was tied together under the trailer in a fuse box. The AC and interior power are separated into two fuses, all fed by a 30 amp twist lock outlet at the tongue of the trailer. Chuck fabricated a custom mount for the outlet along with helping me set up a cable to run generator power and another to run off of track power outlets.

The major bummer was turning the switch on the brand new AC unit only to find the power knob was broken and I'll have to call in for warranty information to get replacement parts. Oh well, not immediate need, so there's plenty of time to get new parts.

At this stage, the trailer is really coming along. Walls are insulated, painted, the ceiling is closed in, AC is 99% ready, power hookups are all ready, two new LED lights are set up, and there's two cabinets and a shelf for storage and work space.

Don't Just Sit There, (part 3) OK, Sit There and Watch Some Racing Today! 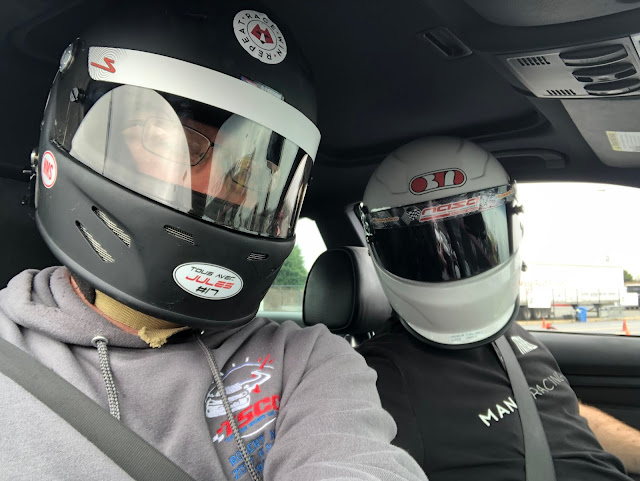 The F1 folks explain it in this article: Virtual F1 Grand Prix

Is there an audience for virtual racing? I'd say yes, mostly because there isn't any real racing! This will be broadcast on ESPN, Sky Sports in the UK, and a variety of streaming internet platforms such as F1.com, F1 YouTube, Twitch, and Weibo.

Speaking of Grand Prix cars, and life before the virus, here's a look back at one year ago today in NMS history. Julie, Brian, and I visited the New York Auto Show, and enjoyed seeing this Sauber-Alfa Romeo F1 car up close and personal: 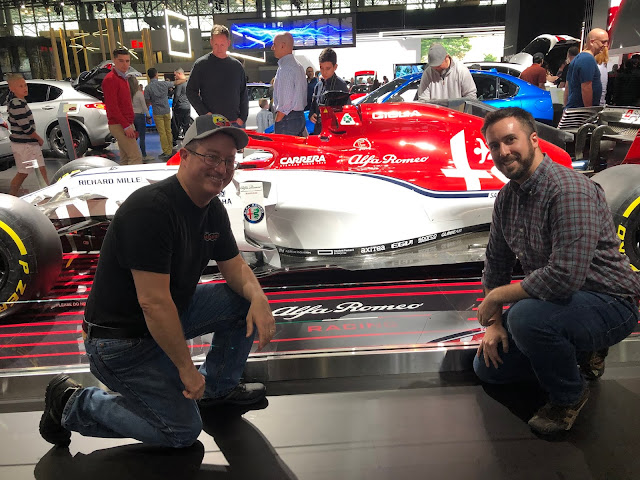 Posted by robert.a.nixon6@gmail.com at 8:19 AM No comments:

All around the world, motor sports fans are busy not driving and not going to races. The smart ones are still in the garage working on their cars, ordering car stuff on line, or studying their race videos and data to become better drivers. Even with all of that, you might have some free time left over, so what in the world is there to do? Glad you asked!

Today at 3pm Eastern, on ESPN2 of all places, some of the current Formula 1 drivers, and a few other folks, will be racing against each other. This is the 2nd official F1 simulation race, and the track for this race is Australia. Other race series are doing similar events, so let's move on to books and movies. ESPN Article

While companies that want to make money like to have you stuck on their website, NMS is not here to make money, so we actually want you to leave THIS website and check out these other ones. Hey, we're just helpful.

NMS-North has a few books on the shelf, and besides looking at the pictures, sometimes I actually read them! Other than stories about driver from the past, some of the more recent books I like:

Let's move on to movies, films, documentaries, etc. Everybody seems to have a list of these, so here's a few:

At this point, if you're not into computer racing on TV, reading, or films, how about a coloring book from our friends at Automobile magazine?  Automobile Mag Coloring Book
Posted by robert.a.nixon6@gmail.com at 10:37 AM No comments: