At the quarterly abandoned auto auction at the Norfolk Navy Base yesterday, it was a new location, a big crowd, and some serious bidding going on today. During bidding for two of the cars there was some confusion on the bidder's part on what car they were bidding on, so believe it or not, to eliminate any doubt, the auctioneer cancelled the just concluded bidding for these cars and immediately re-did it, selling the car again. The lesson here is that you must understand what in the wide wide world of sports you are doing if you go to an auction! Every other car, truck, and motorcycle sold smoothly, so let's take a look at what things sold for this time.

Overall, every single vehicle up for auction sold, which doesn't always happen, and I'd have to say that on average the prices were higher than normal. Of course the condition of these vehicles covers a big range, and you'll see that in selling prices that ranged from 100 bucks to over 9,000. While we're talking about money, I'll mention that another Mustang with the same color, same body style that we bought a year ago sold for much MORE this time, so that made us feel like we got a good deal, even though we've now sold it. Go figure!

The first photo above shows the lowest price (Altima $100) and highest priced ($9400 VW Passat) cars of the day, and they just happened to be parked together. In between, there were some interesting vehicles that got some attention, like the Hummer H3, a nice Lexus, and even a Range Rover! 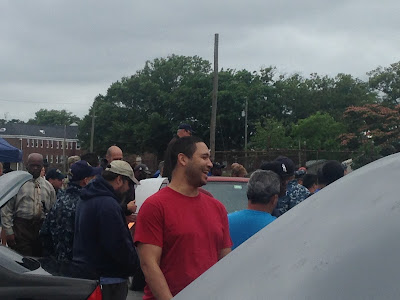