Late in October I headed out to Tobay Beach once again for the penultimate autocross of the 2022 season, and enjoyed another fun filled day of being outside, a little bit of driving, and a whole lot of what you might call "goofing off with other car people." The weather person had a different idea, but we didn't let that stop us. With the field of 30 drivers split in half, we managed to get everyone out for 3 runs in the dry during the morning, and then when it got wet enough to slow things down, everyone drove 4 more runs. Here's how I did: In the gigantic class of 2 drivers in S02, I managed to take 1st place. Out of the Porsche car drivers, my RAW time saw me finish 4th fastest out of 11. On the modified PAX time, same result, 4th out of 11 Porsches. Then, with all drivers of all brands of cars, my RAW time was 12th fastest out of 29, so a little better than right in the middle! On PAX time of all drivers, I ended in 7th of 29, so at least this all keeps me in the top 10 Porsche drivers for 2022, with only one more event to go for this year. 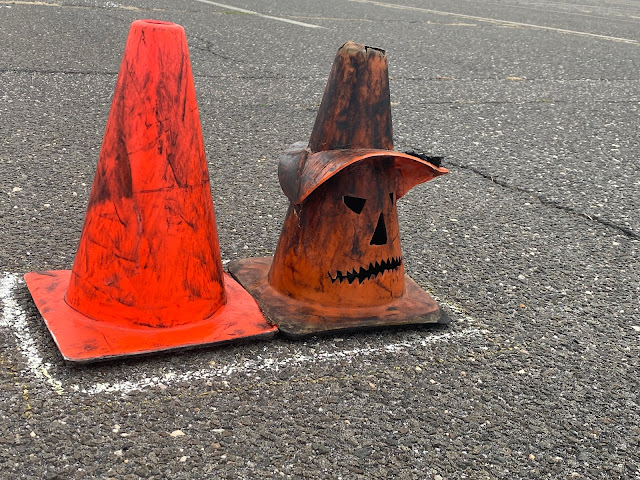 My three runs in the dry-ish morning went like this. My app times in the car do not always add up to the official run times from the club timing system, but I wanted to take a look at each of my runs and see how it went. I broke the course down into 3 sectors, the first and third are pretty straight-ahead autocross stuff with some slaloms, while sector 2 is shorter and is just a big sweeper turn at the halfway point. 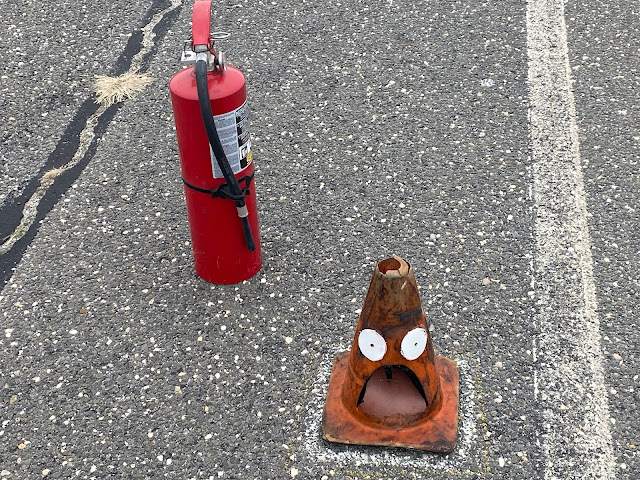 Run 1: I was driving the course, when I noticed a few cones that were knocked over and out of place, so I came to a stop. This let the course workers see that there were cones that needed fixing, and that this run didn't count, and I got a freebie re-run, or "do-over!" more practice is always a good idea!

Run 2: 46.242, a whopping one tenth of a second slower, so while that might be great in the Consistency category, it was not so good in the "why aren't I getting faster" category. One more fun to go. I have a video of this run, but my camera auto focused on either the rain drops on the windshield, or the windshield wipers, so it's just a video of a blurry parking lot! From the data I saw a top speed of 56mph.

Run 3: 44.544 OK, this drive felt a bit better, and dropped just over 1.5 seconds of time in one run. A few more attempts in the dry would have been fun, but the rain just kept coming on down! Top speed of 58.9mph.

Here's the video of that run: My fastest run of the day, before the rain!

Maybe not a lot to learn from the sector times, but it's fun to try and figure out how to drive faster! My afternoon times were all slower in the wet, although the top speed of one run hit 58.0 with a middle sector of 7.390, so that was pretty close to the best dry time in the morning. Now all I need is a few more decades of practice, special rain tires, a better car, and what scientists called "driving skill!"

Posted by robert.a.nixon6@gmail.com at 5:35 PM No comments:

Our local Porsche Club autocross season includes a really fun event for the top 10 drivers about this time of year, the Top Ten Shootout. OK, it's fun if you're IN the top ten, so I'm happy to have made it for the second year in a row. Last year's top ten was a fun event, right up to the end of driving when I finished 9th and had a heart attack, so I'm really hoping for better this year...you know, like maybe 8th place. Oh, and NO heart attack! OK, seriously, ANY placing and NO heart attack is plenty good enough for me, so there's your positive live-long-and-prosper-world-peace pep talk for today, and I mean it 100%.
In the 2021 Shootout we competed in a Toyota Camry, which may NOT be the best car for competitive driving, but the point of it was to have fun with10 drivers to take turns in the same car and see who does the best. This year, the surprise car was a Nissan Altima, and while I'm sure it's a fine car, it was not quite up to the power, steering, suspension, and other fun driving factors I've gotten used to in the Cayman! However, it was fun to drive, and I gave it my best for 3 runs.
I was happy just to be out doing car stuff on a nice day, mostly sunny, about 60 degrees, not windy or raining, and a good time was had by all. For me, I placed absolutely last, but without a trip to the hospital like last year, so I'll count that as a big victory!
Posted by robert.a.nixon6@gmail.com at 6:34 PM No comments:

You just might have read a thing or two about electric cars. Heck, you might have even driven, or own one by now! This past weekend I spotted an all-electric Audi e-Tron with a hilarious license plate that read "BOO GAS" and it got me thinking about electric cars. Oh, first off, I'm thinking Boo Gas is referring to the electric car, but if I'm wrong and it's an early Halloween joke of some kind with "BOO!" meant to scare me, well, whatever.
I don't want to start any fights about gasoline, or the political influence that is now mandating the end of new gas-powered cars in the future, since the way I see it, these are just facts. In addition to some European countries, and California, recently the state of New York joined the ban on future sales of new gas-powered cars (starting in 2035.) Hey, just for fun, let's refer to the engines in those kind of cars like they do in Formula 1. Yes, the old-fashioned ICE cars, with Internal Combustion Engines. Ice cars, ha ha ha! There, did that lighten the mood? Do you need air conditioning in your ICE car? Did Fred Flintstone drive an Ice Car in the Ice Age? Ho-ho-ho!
Anyway, the Audi e-Tron that inspired this discussion is a member of the VW company, which just recently spun off another family member in a stock IPO, namely, Porsche. The long history of the relationship of Porsche and VW is way too complicated for me to explain or understand 100%, so I'll just say that the most likely result of the Porsch stock IPO is that the two families that run VW and Porsche are the ones most likely to benefit! Funny how business works that way...it all revolves around money somehow!
OK, just to say this, my best guess is that even with the future of cars being electric, or hydrogen, or unobtanium powered, the gas-powered cars we have now will still be around and need gas, and need maintenance, and need roads, for many years to come. Let's hope the scientists and rule makers come up with the best solution for the car fans, and for our planet.
Posted by robert.a.nixon6@gmail.com at 1:47 PM No comments: