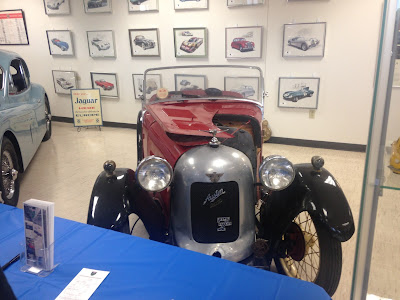 After looking at cars outdoors and cooling off with an ice cream cone, I headed indoors and took the 12 O'clock tour. On the way to the tour, an Austin Swallow appeared! 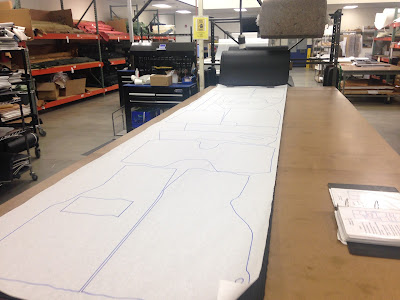 On the left, you can see some material laid out in the sewing shop. The Moss Motors folks make interior kits for British cars, cutting the material and sewing them up right here in Virginia.

It was interesting to hear about their decades of experience making the patterns for the material, working with leather, dyes, and then later seeing some modern technology that makes the job a bit easier. 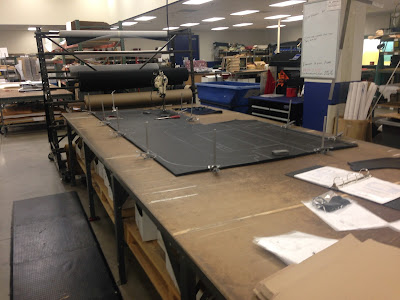 The black material has shapes already on it, with several layers of material that can then be cut all at once with some higher tech cutter that is more modern than a pair of scissors!

This sewing shop area seemed plenty big enough, with very large tables and work spaces for the sewing machines, but it's a very small part of the facility in Virginia. 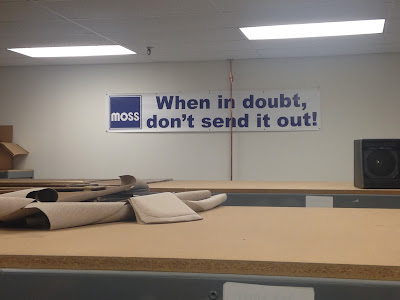 The original Mr. Moss started the company after buying and falling in love with an MG long ago, and realizing that dealers in the US didn't carry parts and often didn't even work on the cars.

From attending this open house and taking the tour, I'm sure I'd want to do business with them if I end up with a British car or Miata in my garage some day.

OK, now I've got to explain this part of the tour. This big table in the next few shots has rows of small holes in the top, and that allows it to provide suction to the material (dark cowhide in this case) on it. Then they cover the hide with plastic, again to hold the material in place for marking and cutting.
I saw a machine like this in a video from the Ferrari or Lamborghini factory, so I'm guessing it's a very expensive machine! I'm not sure what brand of machine this one is at Moss, but here's a similar device with a cool video showing it in operation at this link: Lectra 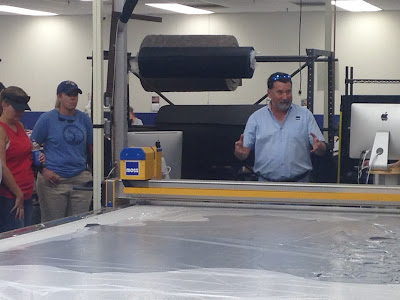 Over the table (in the next shot) is a camera, operated by the guy at the right rear of this shot. On both sides of our tour guide in the blue shirt you can see 2 Apple computer monitors that control the machine. With the software for this machine, it can analyze the material's shape and determine the best way to cut it into whatever pieces are being made, all while avoiding any imperfections in the hide. This cuts down on waste, saves the company money, and until they build cows that have the exact same size and condition of leather, then I guess this will have to do! 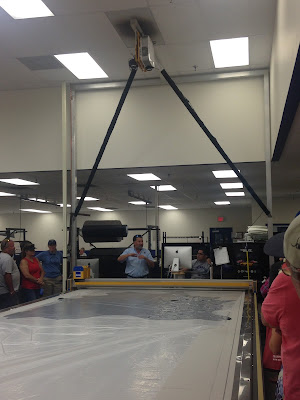 Once the material has been stabilized on the table, and the camera-computer-software has determined how to best cut it, the cutting tool on the yellow rails zips out to start working. If you look closely at the next photo (click on it for a larger view), you can see triangle shapes being cut to make shift-boot sections. Compared to having people measure, mark, and cut these pieces by hand, I'm sure the big table tool is way more accurate, faster, and cheaper in the long run. We were told that even with their volume of business that they only run this machine about 20 hours per month, and it still saves them money over manually measuring and cutting material. 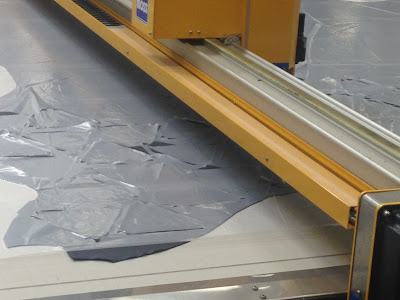 After all the cool sewing, material, patterns, and awesome machinery, we visited the warehouse that takes up the vast majority of the building. If there is a part for your British car that you need, odds are that they have it in stock here. Moss has the most often purchased items closer to the shipping section at the far end, and I'm sure in the world of warehousing and shipping that they've done a lot of homework on the most efficient way to lay things out. I'd settle for just storing everything in my garage a little easier, so maybe they could offer some advice!
Every order, and every part, gets pulled off the shelf by a real person. There looked to be plenty of room between all the aisles to make this process run as smoothly as possible. If you've ever been behind the counter of your local auto parts store, well, it's not this huge, that's for sure!

Below you can see some mufflers and exhaust pipes. Over at the shipping area they had all the supplies needed to box up individual orders in any shape needed. One other cool feature, and I'm afraid I didn't get a photo of, was the conveyor belt that also uses some cool technology. You might be picturing big factories with long conveyor belts that are moving all day. This is opposite, because each section of individual rollers (not a long belt), only rolls when the system senses that a box has been placed on that section. Long story short, I imagine they save a lot of energy, money, and cut way down on noise by having short sections of rollers only operating as needed, compared to running full time all day long. Pretty smart, huh?

In the last photo, besides the groovy billboard on the wall, you can see the carts with little blue bins on them. This is what they typically use to roll around the shelves and pull parts for your order. That's another reason to have plenty of space between all shelves, to avoid those frustrating grocery store traffic jams that give us all shopping cart road-rage!

That's it for the actual tour here in Part II. Stay tuned for Part III and a look at the most unusual cars from the 2017 Moss Motorfest! Thanks for reading: even if you just looked at the pictures!