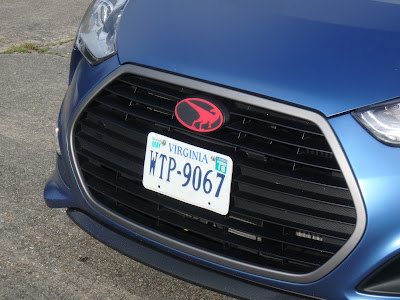 Hey boys and girls, I just flew in from the 24 Hours of Le Mans race, and my arms are TIRED!
If you think that's funny, check out the Hyundai Veloster "Velociraptor" logo  above! Try the veal, I'll be here all week.

But seriously, we had another fun filled day of autocross at the Pungo Autocross Center of Excellence (PACE) with the Tidewater Sports Car Club (the link is in our links section oddly enough). It was hot, like upper 80s, and it was humid. Fortunately there was a breeze most of the day, and some clouds as well, and along with no rain it was the same driving conditions for everyone in all three run groups.

We all had 5 chances to take on the course, and only the one fastest run would count for the standings and bragging rights. While the fastest driver of the day got around the cones in 35.893 seconds, the best I could manage was a 40.783. Without wasting anymore time, let's take a look at the course, courtesy of a little old GoPro camera action from the front windshield of the NMS FIAT:

That was my last run of the day, and it was about a half second improvement on my previous best, so it made for a great way to end the day. Of course the shower and the beer at home later also felt pretty good, but it's important to do these things in the proper sequence! To spell that out, don't shower and drink beer as you drive on the autocross course, the other drivers will be jealous, and it won't help your speed or make you miss any cones!


Here's the timings on my five runs:

Those first three runs all felt pretty good, but were only about a tenth of a second apart, so not much improvement even if they felt fast. For the last two runs I changed tire pressures, basically just going back to where I'd been running in previous events this year, and all of a sudden my times dropped about a second. Compared to the first three runs this made me much  happier. Happy is good! The drivers that actually win these events are even happier!


-In the HS class on the day, there were four of us, and I managed to take the win.
-Overall on RAW time on the day: Out of 73 drivers, I placed 42nd, a bit down from the midway point.
-Overall on PAX time on the day: Same 73 drivers, using the PAX adjusted times, I finished in 21st place.
-On the season for 2017, my unofficial calculations put me in 18th place overall, and now 1st in the HS class. Eighteenth is  two spots up on where I finished last year, with plenty more events until it ends in November.