1. Not too long ago I blogged about visiting Fantom Works and told you about their free tours on Fridays! To update that information, I have good news and bad news. Good news: They've also added a Wednesday tour, and will add a Monday tour if there is demand for it. The bad news: Tours now cost $10, and will be limited to 40 people per day. To be honest, these guys are in business to work on cars, so I can understand that they want to offer tours to their fans as wells as make money. If you're a fan of the show, I'd still recommend taking the tour. If you're not a fan of the show and are looking for stuff to do in the Norfolk VA area, let me know and I'll share my secrets for only five bucks! Look at it this way, you save off the 10 dollar tour, I make 5 bucks, it's a win-win! WINNER WINNER, CHICKEN DINNER! Fantom Works Tour Update

2. Probably the biggest auto news that most folks have heard this week is that the classic radio show "Car Talk" will be stopping production this fall on National Public Radio (NPR). In a way this is not really news, because they've only been airing Car Talk's Greatest Hits for several years, but this fall will be the end of the line for the show from NPR. Your local radio station might even be playing it's last episode this coming Saturday. The good news is that the Car Talk website always has lots of cool car stuff on it, including recordings of the show. Let me recommend you check it out now! Car Talk
Here's the story from Road and Track magazine about the end of production: Road and Track Car Talk story


3. Speaking of car magazines, Motor Trend reports that the number 1 all time selling electric vehicle is one of these four:

Yes, I'm a big fan of FIAT, but the top selling EV is the Nissan Leaf! Imagine that! Motor Trend Leaf

4. Germany has announced a new emissions test for vehicles, which unlike the current lab test, will take place on real roads! This sounds like a good idea to me, and is a way of saying that the VW engineers that had cheated and beat the current test (until folks at the University of West Virginia figured it out) have now failed after thinking they'd beaten the Star Trek Kobayashi Maru. NEWS

5. If you are a fan of European cars that are NOT sold in the US, then you've probably heard of Spain's SEAT. They are now a part of the VW group, but back in the earlier days, they often built FIATs and put the SEAT badge on them. Here's a very nice article with photos from a visit to the SEAT museum in Barcelona that I thought was great, courtesy of our friends at Jalopnik: Jalopnik SEAT

6. Also in auto news, and not political news as far as I'm concerned, Ford announced that they will stop making the Focus in the US. Last year they said they'd make them in Mexico, but the latest word is that Mexico is OUT, and China is IN! If you're shocked that an auto maker would be building in China and importing cars to the US, you need to catch up with this idea, because GM and Volvo are already doing this. I even remember seeing a Honda Civic at the Washington DC auto show earlier this year that was assembled in Great Britain. This article from the New York Times covers this story, and states that auto buyers really don't care where their car comes from or where it's built. That's probably true for most people, but not all I'd say! New York Times Ford Focus

7. Enough about magazines and foreign countries! What about good old all American car stuff and Television? Glad you asked! Today starts a new series of Jay Leno's Garage on CNBC, every Wednesday night at 9pm! We're still a few months away from the return of the Amazon Grand Tour (the old BBC Top Gear guys), and I haven't heard from Jerry Seinfeld's Comedians in Cars Getting Coffee lately, so this is BIG NEWS! Seinfeld will return with more CICGC later this year on Netflix, so stay tuned for that. In the meantime, catch Jay Leno TONIGHT!  CNBC Jay Leno
Posted by robert.a.nixon6@gmail.com at 10:03 AM No comments:

Glad you asked how we're doing! First off, I'm not a big fan of math, unless I'm adding up my lottery winnings, but, since I'm not busy winning millions of dollars right now, let's review how the ol' FIAT is doing in competition, and I am gonna have to use some numbers.

Here at NMS-North, it's still June, but this coming weekend turns into July, so I'm planning on hitting the local Cars and Coffee on Saturday, and then Autocross on Sunday with the ODR folks. This year I'm competing with two clubs, so let's see how things are going after about a third of the season. One thing that makes it interesting by driving with various organizations is that they all seem to keep score with different points systems. When we started with the South Carolina Region SCCA, they had a simple points system for each class, where 1st place thru 8th place earned points, from 10 down to 1. Since moving to Virginia though I've learned that the two clubs here don't use that system at all.


First up, the Old Dominion Region of the Sports Car Club of America. This club focuses on the year long overall club championship, and doesn't really track drivers by class. For points, they use a points system based on 175 for first place in an event, 170 points for 2nd place, and down to 1 point for 65th place and lower! After driving in two out of their first three events, I've scored 124 and 109, and currently sit in 22nd place overall out of 75 drivers. Is 22nd any good? Well, like everything else in life, it depends on how you look at it!

For individual events I finished in 13th, and 18th. That's not too bad, but of course that leaves a lot of folks faster than me! Compared to my previous events with ODR, my 2017 average of 116.5 puts me ahead of 2015 and 2016, so I'm happy to be getting a bit better. Out of the drivers with only 2 events so far, I'm 8th best, so that's pretty good. Another way to compare drivers with 1, 2, or 3 events so far is to calculate their average per event...and guess what, I already did the math on that too! Yep, used all my fingers, toes, and a calculator! Based on average per event, I'm in 20th, so a couple places higher up the leaderboard.

What makes it even more interesting is that out of 8 events to be held this year, the championship standings will only count the best score in 6 events, so each driver can drop their 2 lowest scores! That's almost as good as "Do-Over", or an extension on the "Five Second Rule" when you drop your pizza on the floor!

Since I've missed one event, I'm certainly dropping that big fat ZERO for that event, but other than that I need to try and stay up near the top 10 each month to have a good year. On the other hand, some of the folks ahead of me have done three events, so by the time we start dropping events, they are going to lose big chunks of points, and we'll all be even on number of events, which should boost me at least a little higher than 22nd. If we did a "drop 2" events right now, I'd be tied for 19th, but there's a long way to go this year.


Over at the local Tidewater Sports Car Club, their club championship is determined by PAX time, but the points system is different than ODR. In this method, the fastest driver on the day gets 100 points per event, and then everyone else divides their PAX time into the winner's time for their points. This gives each slower driver points that are a percentage of the winner's time, so typically we have people scoring in the 90s, 80s, 70s, and down to the 60s. With only driving in 3 of the 4 events so far this year, I'm in 19th place on total points, (with an average score of 94.78) out of 136 drivers.  This puts me on pace to improve over last year's 20th place (2016 average score of 92.10).  Hey, any improvement is a good thing! Bottom line, after finishing 29th in 2015 (average 90.36) and 20th in 2016, I'm shooting for top 15 this year. Depending on how you look at things, I think I've got a good shot at it if I drive my best. Using the "Go-ahead-and-drop-2-events-right-now-even-though-it-doesn't-mean-anything" rule, right now that would put me in 12th.

In three TSCC events, I've placed 7th,11th, and 21st, so I'm averaging 13th if my math is accurate. Hey, then I just have to maintain that pace all year and maybe I'd end up 13th! Or better. Or worse. That's where it's hard to predict the future, unless you're Biff from Back to the Future and have that Sports Almanac to help you out for the next 50 years!

With the TSCC, we also compete for class championships. After winning the GS class the past two years, this year my car is in HS. In the HS class, we've got a two way fight with my friend Chris with his VW Golf. Head to head wise, he's beaten me twice, but we've both won when the other car wasn't there. Right now it's pretty close, so I'm going to try and speed up a bit and see how things go. Having a tough battle makes it way more interesting than the last two years where there really wasn't anyone else driving in all the events in my class. Sure, I'll take a 1st place against no one else in the class, but hey, real competition is what life is all about too! News Flash: You don't always get a trophy, but you never win if you don't compete. 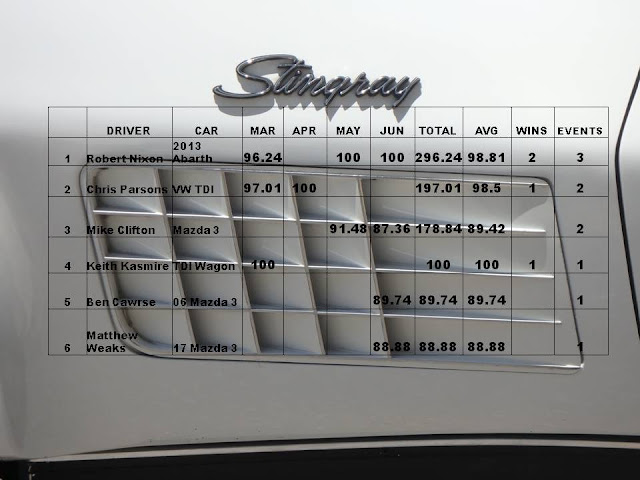 Posted by robert.a.nixon6@gmail.com at 2:36 PM No comments:

No Ham, Just Lots of Cars 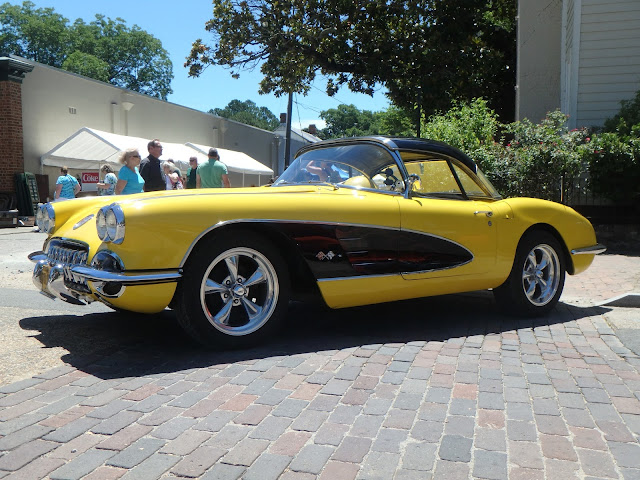 This weekend in Smithfield Virginia is the annual car show. Yes, it's the Smithfield that is home to Smithfield Ham. No, we didn't spot any hams, just cars. If you're really into ham, you can use Google to visit the Ham Cam online and see the world's oldest ham!

Some of these cars are older than me even, so if I'm not chock full of information, well, you can always look it up or just see if you spot something you've never seen before. Most of today's show was all about America, with tons of Chevy, Ford, Dodge, Chrysler, even a DeSoto and a Hudson!

Buckle  up, here we go, here's most of the cars we spotted on display: 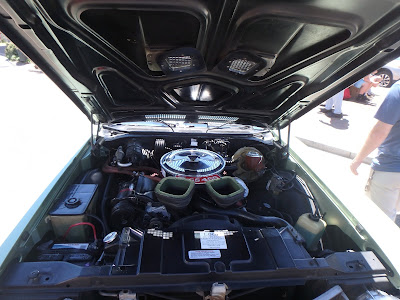 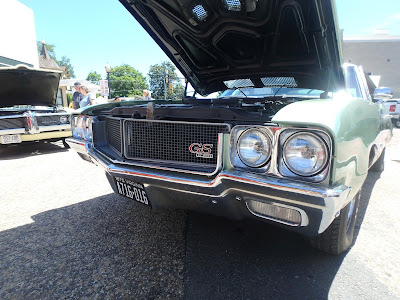 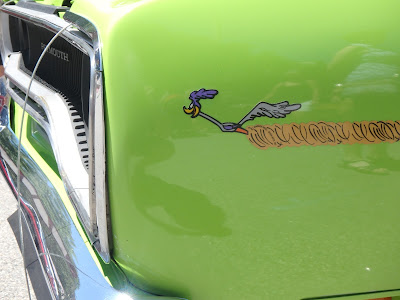 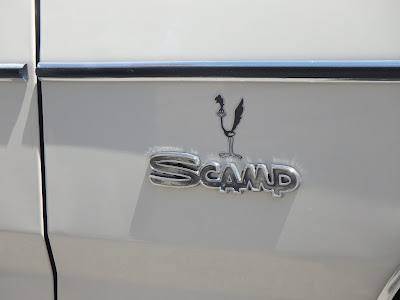 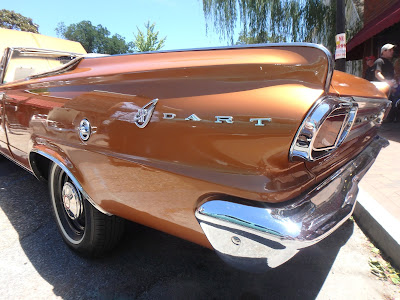 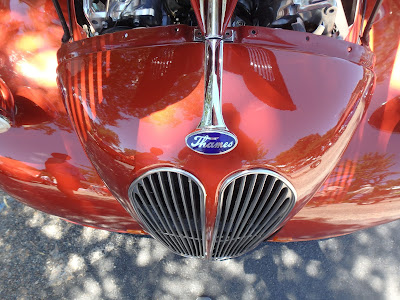 Posted by robert.a.nixon6@gmail.com at 1:22 PM No comments: