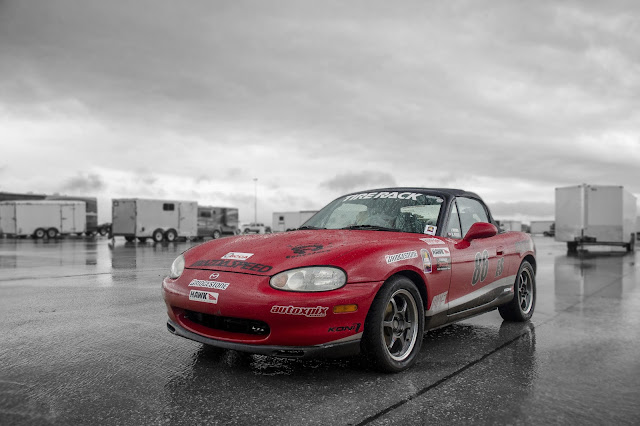 The NMS Miata in Lincoln NE for the SCCA National Championships!September 4-9, 2016
MIATA MODIFICATIONS:

-After starting to autocross with a groovy 2004 turbo Mazdaspeed Miata, Brian sold it to buy this fixer-upper, since the 99 Miata was better suited to development and gearing for autocross. Found in NC as a bargain buy salvage title car on Craigslist, the car has been modified as above, with more to come in the future. With co-driver Jason Rucker in 2016, this car started to win regional events and place at national events as well. Both drivers drove the Miata in that year's SCCA Solo Nationals. Since then Brian is going all out track car with the Miata, and is currently competing in Time Trials with NASA and the SCCA.

CAYMAN HISTORY:
-Arriving at NMS in 2020, the Cayman is a two previous owner car, now with 48,000 miles, a 2.9 liter flat six cylinder mid-mounted engine, and the Porsche PDK 7 speed automatic transmission. As the first mid engine NMS car, we're expecting a lot of driving thrills out of this 265HP German engineered, (assembled in Finland) sports car.

CAYMAN MODIFICATIONS:
Currently we slapped some brand new shiny 18 inch O.Z. wheels and Falken tires on this car, currently on ATE brake pads for daily, and Ferodo DS2500 compounds on the track. With these new wheels we also replaced the old lug nuts since they were rusty. Now with about two years of autocross events, and multiple track weekends so far, we are loving this car! The Cayman came with options for 17, 18, or 19 inch wheels, and right now we have a set of wheels in each size! We've installed new spark plugs, oil changes, air filters, oil analysis, and some other maintenance items, but overall it's running strong in stock condition.

1989 MIATA MODIFICATIONS:
BSI-build roll cage, AFF fire suppression system, Sparco Sprint racing seat with Schroth 6 point harness, cool shirt mount in the trunk, custom hood, trunk and fuel cap pull releases, hellasweet purple exterior lighting and blue cockpit lighting, butt-terrible 188k mile Mazda 1.6l engine
1989 MIATA HISTORY:
One of the earliest model year 1990 Mazda Miatas sold, the Lemons Racing division picked up this '89 build date car in November 2018. With 188,000 miles on the clock, and the previous owner's plans to swap in a V8 engine falling through, the team picked it up for a bargain. It was stripped down, taken to BSI Racing in Daytona, FL for a full roll cage to meet Lemons specifications and made its racing debut in May 2019. It survived most of the 24 hour race with some teething problems. It's second race in September yielded an 11th overall finish, which was the best for the team at the time. In 2020 the Miata kept rolling, and took an outstanding 2nd Overall at CMP in the fall FULL 24 Hours STRAIGHT RACE! This thing just keeps going!
2011 BMW 335is MODIFICATIONS:
K&N cone filters, camber plates, lowering springs
BMW 335is HISTORY: When teammate, John got the opportunity to rebuild a somewhat rare family-owned Firebird Firehawk, he jumped at the chance. Unfortunately that meant his BMW had to find a new home. Brian took the opportunity and purchased the car in late 2018. It saw several friends behind the wheel in 2019 through multiple autocross events. The inline six cylinder engine is force fed air with two turbo chargers, making over 300hp and 300ft-lb of torque.

-The full history on this car would fill a book, so the short version is that a previous Lemons racing team was done working to keep it running, so it was donated to the new Team Coronautski, and prepped for more Lemons racing. After not competing for five years, the car had a great first outing in September 2017 at Carolina Motorsports Park, and earned the Lemons officials coveted "Hella Sweet!" recognition! Some on track testing in December 17 was followed by a 2nd Lemons endurance race at Barber Motorsports Park in February 18. With an epic head gasket change and other repairs after racing on day 1, the Coronet was back on track and completed all of day 2 racing thanks to huge Team Coronautski effort late into the night!

-For their second Lemons Race, Team Coronautski was at Barber Motorsports Park in Alabama early in 2018, and after more work on the car and improving their pit stop times, moved up to a 4th place in Class C. The team returned to Lemons racing at the Fall CMP event in South Carolina in September where they took their first class C win!
1936 Bugatti
Next up is the 1936 Bugatti that Brian used to own when he was 10 and learning to drive on our private NMS track in Monte Carlo. Currently on loan to the Petersen Automotive Museum in LA PETERSEN.ORG where this photo was taken, if you believe that story, then come see NMS-North on Long Island and shop our fine selection of bridges of New York City we have for sale! We're blowing out the Brooklyn and Throgsneck Bridges this week, and no one sells bridges in NYC cheaper than us! With every bridge, we'll throw in a free EZPass so you don't have to pay the tolls! 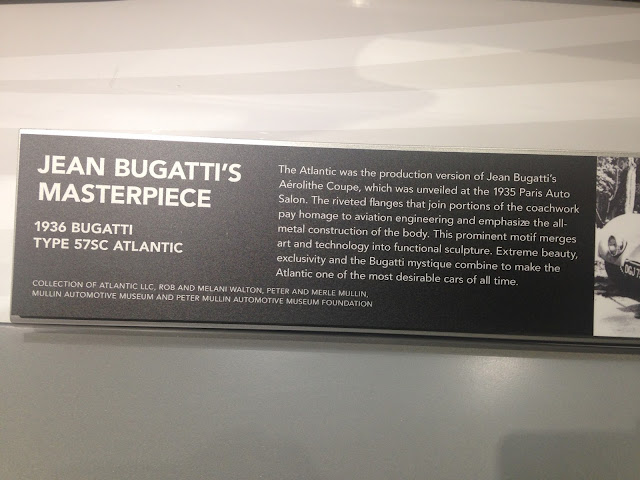