Halloween Cars and Coffee (Not Spooky!)

Following the Top Ten autocross fun two weeks ago, and surviving a heart attack, I am feeling good and happy to be blogging again. Of course, no one else may be happy about me blogging again, so I guess I'm doing it for fun! This morning I visited the local Cars and Coffee in our Macy's parking lot, and as the name implies, looked at some cars, and grabbed a no caffeine coffee at the Starbucks. It's the little things in life that count, you know, like breathing, walking, talking, and going to Cars and Coffee! Here's a look at some autos on a nice fall morning, just a bit damp, but no rain. 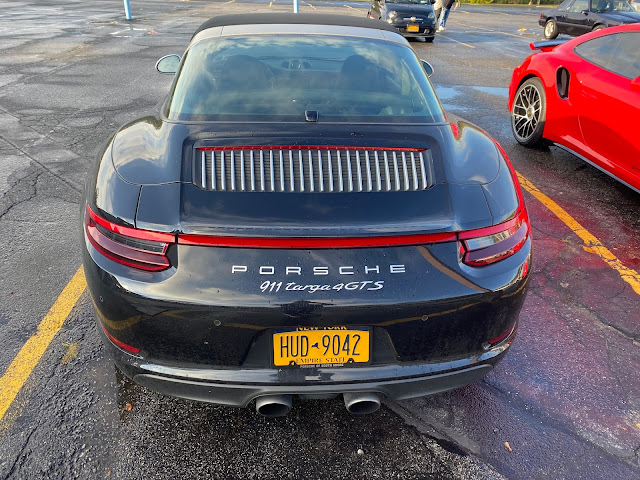 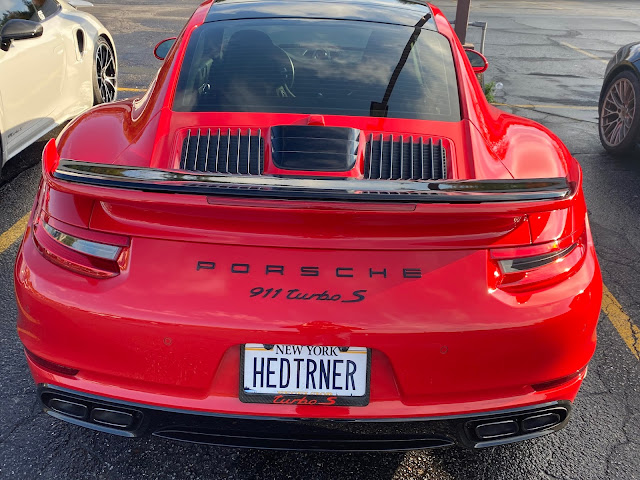 Posted by robert.a.nixon6@gmail.com at 10:24 AM No comments: 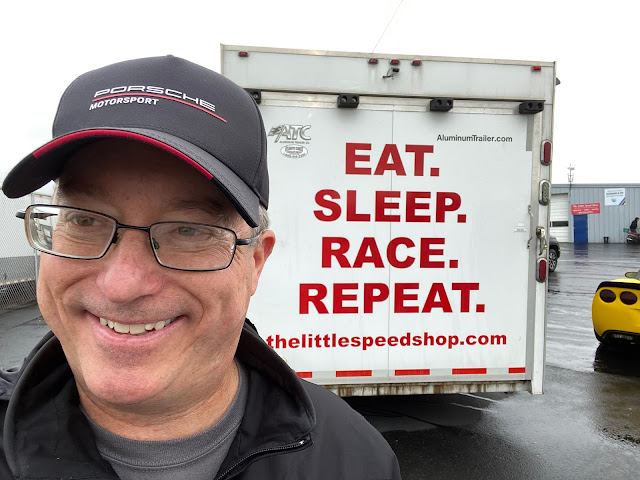 This Sunday will be the next autocross event with the Metro NY Region Porsche Club of America, this time with a twist! All the other events are open to all members, and we usually have a good number of competitors about once a month from say March through November. However, this next event is limited to the highest scoring 13 drivers so far this year, so the shoot-out, or run-off will be a bit different. 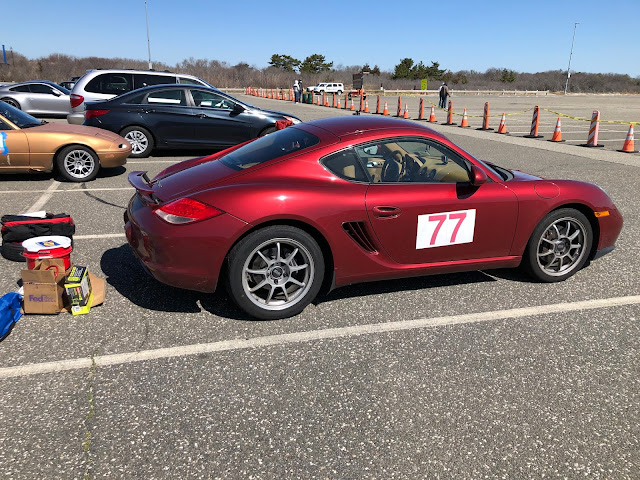 Instead of the normal everyone-drives-their-own car competition, this event will have each competitor take turns in the same car. I don't know if we get to find out what it is before driving, but I'll be there tomorrow at Tobay Beach and give it 100%. Overall I'm in 9th place for Porsche drives, so with 10 P-car drivers on Sunday, realistically I'm just hoping to not finish last at this unique setup. Who knows, maybe we'll be driving dune buggys or Oldsmobiles? 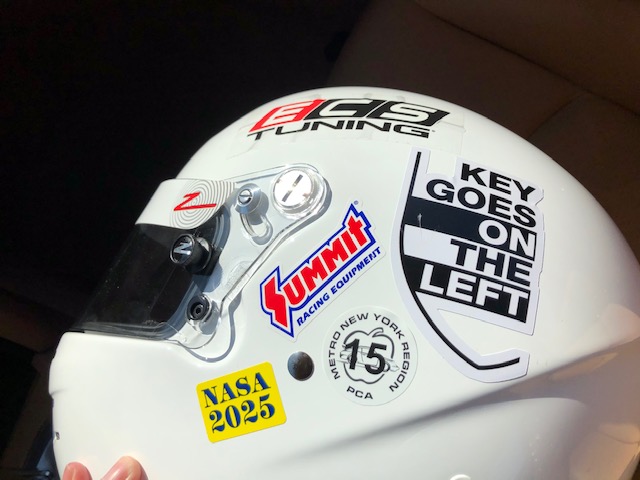 I think we each get a couple of runs, and before driving we still get to walk the course and plan ahead on how to drive it. With each person in the same car, well, I guess it mostly comes down to driving ability! Or, like in my case, it comes down to LACK of driving ability! Maybe it will be front wheel drive, or all wheel drive, or rear wheel drive, we don't know! Could it be a 100hp of fun? Maybe it will be someone's 500hp monster truck! Hey, either way, it's going to be a good time!
Posted by robert.a.nixon6@gmail.com at 5:50 PM No comments:

Drove on a Track, Had a Blast Vol. II

What I like most about being on a track is the driving fast part! OK, that's pretty simple, kinda like Ricky Bobby, but it's true! Why do people ride roller coasters? To go fast! Why would you jump out of a plane? Not for the landing, but to go fast! Driving on track remains pretty much the opposite of every day driving, so it's kind of a release.
This past weekend got a little frustrating since it was just a little wet/misting/rainy. Not much really, but you just can't safely go as fast in the wet, but after thinking about it, I think that's a good thing! The first session on Saturday in the wet forced everyone to slow down and keep it safe, so that's a good way to kick off the weekend too. The track gradually dried all day, and my speed picked up a bit too. I should point out that my driving is in a driver education group, where we are supposed to be learning and practicing to improve our skills. In other words, are should NOT be talking about our lap times, top speeds, or all that kind of stuff. I'd like to think I'm a pretty good student, but, well, my lap times were slower than the last time I was on this track and it bugged me.
However, I realized that this weekend I was in a much larger group, which means more cars on track. More cars on track means that more frequently you slow a bit to let a faster driver pass you, or you slow down because the driver in front of you isn't ready to let you pass. On the good news side, this totally makes passing on track predictable, so that both cars involved know what the other guy is doing. Very good news!
Having said that though, some of the new drivers seemed to be too focused on their own driving, and weren't letting the faster person behind them go ahead and pass them. Well shoot, that's why we're on track, because we're learning how to do this thing! After talking about this amongst the students, instructors, and even organizers, then Sunday's driving was much improved, and it felt like everyone on track was cooperating much better.
As Sunday's 4 sessions went on, there were fewer cars on track each time, as each student maybe headed home a bit early. For those of us that stayed for the full weekend (hey, I paid for it, so I'm staying!) that just meant much less traffic, and the totally dry track Sunday afternoon was great! Confession time: during the last session I was able to go faster than I had back in July, same car on the same track, so that was very rewarding. Plenty of other drivers were faster, and plenty of other drivers would have been better in my car than me, but I'm betting that none of them had more fun than I did.
Posted by robert.a.nixon6@gmail.com at 5:17 PM No comments:

This past weekend I ventured up to Watkins Glen for the second time this year, and drove in eight driver education sessions with the NASA-Northeast folks, and it was AWESOME! After my visit in July and working with a great instructor, I had a pretty good idea of how I wanted to drive the track, and some areas I wanted to improve, so over the weekend that's exactly what I did!

FRIDAY night: My wife and I drove to the track for the 5:30pm "Track Walk." For big time racers, they will always have a scheduled time that they can walk the track, examine the pavement, make note of all the flag stations, run-off areas, and notice all the important stuff like that. For us not at the pro level, and given the length of Watkins Glen, the "Track Walk" was really a "Get in your car and we'll meet at a few key spots around the circuit, get our of your car, and listen to the instructor highlight what you need to be paying attention to in that spot." No matter what you call it, it's fun to do, and really puts the spotlight on the elevation changes at this track. I think from the bus stop and then through the carousel, to turn 6, and down to turn 7 in the toe of the "boot" it's something like 140 feet of elevation change. That's a lot! Oh, and then of course, the track magically goes UP that same amount eventually! Funny thing about a track like that, you keep driving and driving and end up where you started!
Saturday and Sunday it was a bit damp in the early morning session, but then dried out for the rest of the day. While at first it doesn't sound like fun to be driving on a big track in the light rain (with your window down of course) but in reality you learn more. You learn to drive safely, stay off the slippery shiny stuff like the curbs and painted lines, and doing it at a slower speed than in the dry is a good idea!
To be honest, I was in a big group of beginners with instructors, and those of us just a little more experienced without instructors, and we had some big traffic problems where the beginner/slower drivers were just getting used to having to deal with track driving AND with other drivers wanting to pass them AND in the wet, so it's understandable that it was a bit slow. By Sunday, and especially Sunday afternoon, I think everyone was much improved in keeping the traffic flowing, so that was fun. The main point of driver education like this is SAFETY, so we kept it safe. The more advanced drivers (groups 3 and 4, the instructors, the racers, the time-trialers) had their own separate track time sessions, so I have to point out that they all have more experience and are going faster than the rest of us.
A big part of the being at the track for a weekend is meeting to other drivers, learning from them (and in the classroom sessions,) and just hanging out and checking out all the other cars. Holy smokes, there are some nice cars out there! For this blog post I'll just share some photos of the weekend, then next time on the blog I'll talk more numbers and driving stuff! Like I said, I had a blast!
Posted by robert.a.nixon6@gmail.com at 6:21 PM No comments:

Two years ago the NMS team enjoyed a great Fall weekend driving on track at Watkins Glen in NY, and this weekend, well, I'm doing it again! In preparation for two fun filled days of driving and braking (that's with an A, not "breaking") and generally having fun, this week I've swapped out some everyday wheels for my better-go-to-the-track wheels and tires. In addition, I swapped out my everyday front brake pads for a brand new set of Ferodo race-type brake pads, so we'll see how they hold up with two days of serious use.

In two previous trips to the Glen, I've had an instructor in the car with me, but during this event with NASA I've advanced to HPDE group 2, so I can do it solo. The great thing about NASA or any other group is that you can still ask for an instructor to ride along and help you out, offer tips, and/or laugh at what you're doing, depending on the personalities of those involved! So for my previous instructors at this track, Kyle Ray-Smith and Steve Drgon, thanks for getting me this far!

A few months ago I hit the track at the Glen and with an instructor's help, managed to improve my driving and try some trail braking, so this weekend I'll try to pick it up from there and keep things smooth on the track. As a non-racer type of guy, I should just work on being consistent FIRST and worry about higher speeds and lower lap times SECOND. At least I know that's what I SHOULD do!

Look for some reports on how it went, photos, and some videos next week!

Posted by robert.a.nixon6@gmail.com at 5:29 PM No comments: