This past weekend I wasn't expecting to be so close to last place, but none the less, I was one position out of last. Unfortunately the only person I beat was Luke in the blue Miata of "Team Too Tall". On the up-side, the Team Too Tall guys and the NMS Miata team were there together to share strategy and learn together.  Check out the video below.  Brian (52.578) is on the left and Jason (51.540) is on the right.


After doing a video review, matching Jason and my final runs from Sunday as closely as possible, it's much easier to see where I lost time and some spots I may have done better. It's fun to watch the video multiple times and focus on different aspects to see who is doing what differently; steering wheel inputs, shifting, listen for throttle application, car position, where is the driver looking, etc. 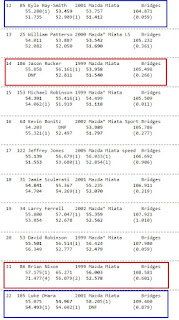 Although I was a full second off the pace of Jason, we can see that I was almost dead-even until the turn-around section half way through the course and then I lost a lot of time on a bad entry to the s-bend just before the slalom at the end.  I'm very glad to see I'm mostly setting a pace much closer to mid-field as I had hoped.  There is still another two seconds out there to chase down before getting into trophy territory.  If we lose even a tenth of a second at each turn of the car and get slightly off of the perfect racing line, that's over 20 turns / inputs and we find where our two seconds from first went.

I'm glad to be working with Jason as a co-driver and also having Team Too Tall competing beside us so we can have some good friendly rivalry for the season and push ourselves to be even faster.  And in the long run, The NMS-South Red Miata team was 0.2 seconds faster over the weekend than Team Too Tall and we'll call that a win.
Posted by Brian at 12:18 PM