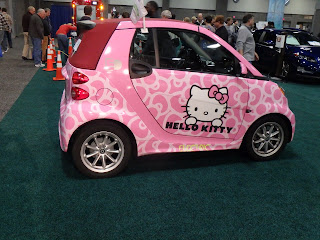 NMS announced today, April 1st, that they have abandoned their usual autocross driving events, and now entered the team full time in the Monster Energy NASCAR championship for 2017. With the distinct pink "Hello Kitty" team sponsorship, the NMS drivers are looking forward to competing with the big guns for the rest of the season.

With a massive 89 horsepower thanks to it's turbo powered 3-cylinder engine, the Hello Kitty Smart Car marks the first entry of Smart-Mercedes power in NASCAR, joining Ford, Chevy, and Toyota as engine suppliers in America's favorite form of racing. With massive 15 inch wheels, a low cost of under $15,000 per car, and top speed of "nearly 97 mph", the NMS squad feels that the time has come for the German engineered but economical car to take its place on the big stage.

Driver Brian Nixon stated that "with its top speed in double digits, we'll save a lot of money without all that expensive NASCAR stuff needed, plus the amount of steel needed for the safety cage will save us big bucks compared to a cage in a Camry!" Adding to the positive vibe within the team, the NMS-North driver was overheard talking about how economical the Hello Kitty Smart will be, and that with a 39 mpg rating on the highway, he expects to run a full 500 miles without refuelling by adding a larger gas tank in the car's rear compartment. When asked for more information, director of racing operations Brian Nixon added "With a 48 month and 50,000 mile warranty, plus the road-side assistance package, we're going save a TON of money by not needing a pit crew!"

Look for the NMS-Mercedes-Smart-Hello Kitty car on track starting next week, April 9th, at the O'Reilly Auto Parts 500 from Texas Motor Speedway. Remember to catch the Monster Energy NASCAR series on the Fox Sports Network!
Posted by robert.a.nixon6@gmail.com at 7:24 AM