Sure enough, right there on page 54 of the new May issue of SportsCar magazine is a photo of some people, and one of them is the NMS Miata driver Brian Nixon! SportsCar is the official  monthly magazine of the Sports Car Club of America, so if you're not a SCCA member yet, their magazine is just one reason to join! Brian is on the left in the photo below: 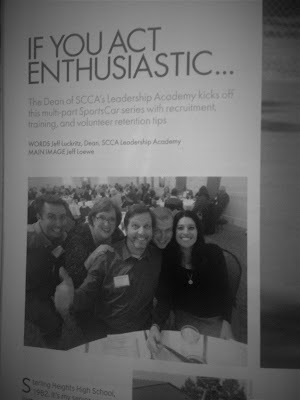 The photo appears in an article by Jeff Luckritz, who encourages everyone involved with their favorite motor sports to be ENTHUSIASTIC! Jeff was giving a talk on being an enthusiastic club or region leader in the SCCA, and Brian and the rest of the South Carolina Region gang were in the audience. 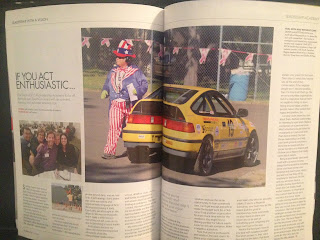 We'd vote Brian the MED (Most Enthusiastic Driver) at NMS, and to back that up we'd point out that after driving in auto-cross and being a SCCA member for just a few years, he's already served as the South Carolina Region autocross director, and moved on to other leadership roles as well. Behind the wheel, he's been improving every year, which included last year's driving at SCCA Solo Nationals in Lincoln NE, various other major events, and this year will see him teaming up with a LeMons team for some endurance racing too. Of course Brian is a very humble guy, and always says that he owes it all to his great parents! 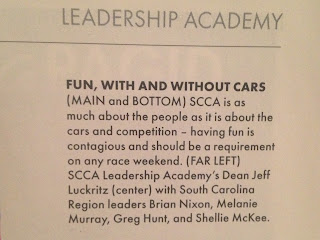