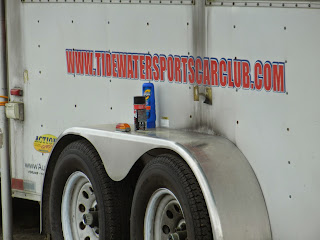 The Tidewater Sports Car Club TSCC LINK  has updated the official points for ALL drivers after four events, and I'm smack dab in the middle of the pack of the competitors that have entered all four events, standing at 19th out of 40. I'm pretty happy with being average in this case! All the standings are below, and you'll notice that some drivers have only entered one event, so certainly they're at the bottom of this comprehensive list. That doesn't mean they are bad drivers, they just haven't been in all the points scoring autocross sessions. Here's the link to the points s listed below: TSCC Points Link

The points are awarded by giving the fastest PAX time driver 100 points, and then all the slower drivers (like me) just divide our times into the winner's time, so it's a nifty system I think. The PAX time is how cars in vastly different classes (like a Camry in a slow class VS. a Corvette in a fast class) can compare their times more on driver skill instead of horsepower.

The column labeled "Pax W/Drops" will come into play later in the season, since the TSCC holds 9 events, but only the top 7 point totals for each driver will count. In other words, by the time we complete event number 8, drivers that have completed all 8 will only count their top 7 for points. Believe it or not, this system used to be used in Formula 1, and in at least one year it turned out that Alain Prost had the most points from ALL races, but since they ALL didn't count, Ayrton Senna took the driver's title because of having a higher score in the limited number of races that count! So it's a great system if you're Ayrton, but not so fair if you're Alain!

My two cents says that for us to have 9 events and drop the lowest 2 is fair, since we're not professionals racing for millions of dollars like the F1 guys, and for normal people, well, sometimes real life comes up and you just can't make it to every race when it's your hobby. I know I'll miss the TSCC event in August, so that's just the way it goes. By only using 7 events, I'll still be able to score whatever my maximum will be.

On the other hand, looking at 118 drivers so far, and keeping in mind that you have to play the game to win, I "could" brag about being 19th out of 118, but that really doesn't mean anything in this case.