I hope your Independence Day weekend was great, and just maybe you enjoyed doing something fun too. The FIAT Abarth and I were at Pungo with the Old Dominion region SCCA drivers in another autocross, and it was a ton of fun! 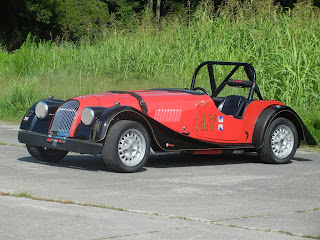 What's cooler than a Morgan?

A Morgan that autocrosses!

Today I autocrossed with the Old Dominion Region of the Sports Car Club of America at Pungo Virginia, and had a great time in five runs.

Out of 46 total drivers my PAX time put me 16th fastest of the day, so not too bad for the only Italian Car driving today! 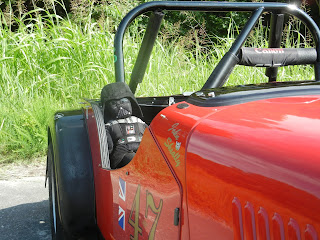 What's cooler than a Morgan that autocrosses?

A Morgan with Darth Vader riding along!

The Morgans are still made in England, and in addition to the classic roadster types you see here, they also make a unique little three wheeler too! 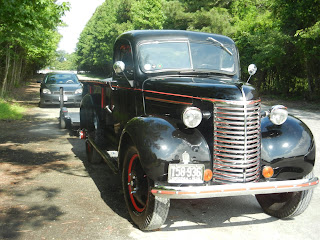 What's cooler than a Morgan that autocrosses with Darth Vader on board?

A Morgan that arrives on a trailer pulled by this awesome 1939 Chevy truck!

This has to be the coolest two vehicle that I've ever seen! 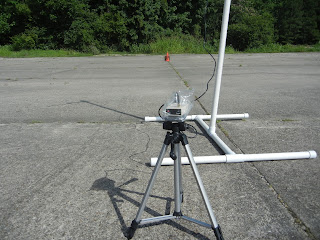 This is the timing light at the finish line today, covered in plastic for the predicted rain later in the day.

Sure enough, I was in the last run group, and after finishing my 5th and final run, I noticed a few raindrops on my windshield!

Good job to the ODR folks for getting everyone their runs in before the rain hit. Rain makes everyone slower, so it can be tough when some drivers were dry and others were getting wet! 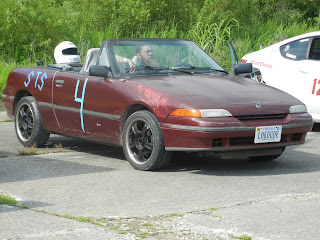 I've noticed these Mercury Capri little convertibles ever since they were made a while ago, but have never ridden in one or seen one autocross. Until today that is, so at least I've seen one on course.

So I've still never driven one, but they still  have a certain funkiness about them just for being so small in a world of gigantic SUVs where any convertible is unusual. 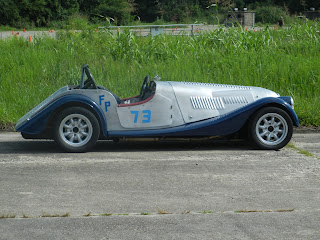 What's cooler than a Morgan that autocrosses?

TWO Morgans autocrossing in the same event.
This one is a 1958 model, and with two drivers sharing it, we saw a lot of Morgan action out on the course at Pungo today. 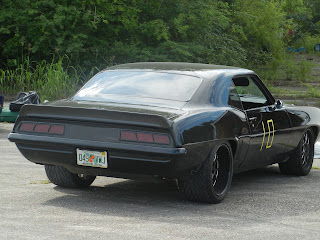 Since the US Women's World Cup team just won the world championship today by easily beating Japan, let's keep saluting the USA with this awesome Camaro.

And it's still the 4th of July weekend too, so unless you're eating a hot dog and playing baseball at the same time I don't know how you could possibly be more American than this! 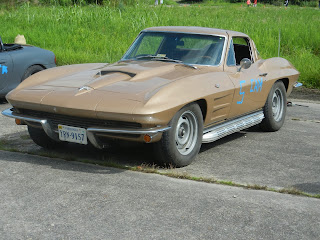 OK, a 1964 Corvette driving around the course on a nice day on July 5th is pretty darn American too!

Rumors keep building that Chevy just might build a Corvette with a rear engine instead of the traditional front engine. I've always been fascinated with rear or mid engine cars, so if Chevy is listening, I vote YES! 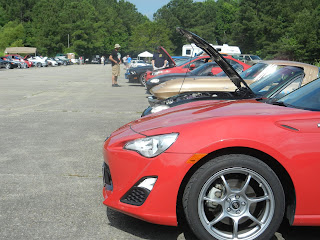 Here's a bit of the view at Pungo as the cars are lined up before the first run group.

In addition to the cars you've seen here, there were plenty of Miatas, Subarus, Mustangs, Porsches, and of course the one Italian FIAT Abarth.

Throw in a quick Focus ST that won my GS class and a few other cool cars like a Factory Five Cobra, and you've got all the ingredients for another great autocross. 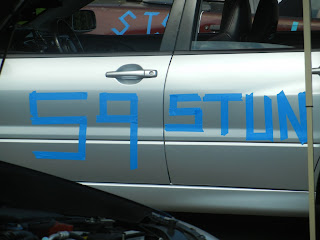 SCCA autocross rules allow for a lot of different types of cars to enter in a LOT of different classes, and this one right here is my favorite because the class spells out the word "STUN".

We'd all like to think our cars are STUNNINGLY fast, but in this case it's just the short version of "Street Touring Ultra-Novice" class.


Here's my five run times from today below.
1: First run I managed to avoid the cones and stay on course, with a time of 42.875. After the first run I usually manage to go faster, so today was no different.
2: Then I drove a bit faster but pushed too hard through one of the sweepers and ended up going 0.3 seconds slower. 43.177
3: This turned out to be my best time with no cones, and almost a full second faster than run #1, so I felt pretty good at this time but felt that I could go faster. 41.983
4: Managed to go faster, but also managed to hit a cone somewhere, so the raw time of 41.824 gets wiped out with a 2 second penalty. Just one more run to go!
5: Another run faster than my previous best, but somehow another cone went down, so the 41.903 also doesn't count.


You can find all the results from today or learn more about the Old Dominion Region of the SCCA and autocrossing at the ODR website: JULY 5 RESULTS ODR AT PUNGO LINK
Posted by robert.a.nixon6@gmail.com at 6:26 PM