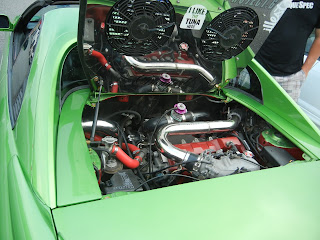 Happy Independence Day from Virginia Beach! First thing this morning I went to Cars and Coffee to see what I could see before the Formula 1 qualifying started at 8am. Correction, I woke up early about 5:30 and watched some of the third practice session BEFORE going to Cars and Coffee, so let me start again.

Second thing I did this morning was go to Cars and Coffee, so  here's a bunch of photos and a few highlights before I left and did other stuff all day! 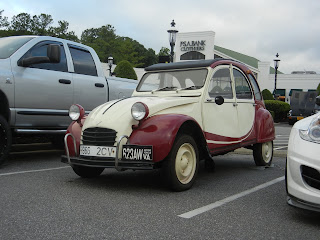 What an odd week! A few days ago I saw two French Renaults near work, and then today this Citroen 2CV was back at CC. Three French cars in one week, that makes about four French cars this year counting a Peugeot I saw at a car show a few months ago. It's like America is turning French or something. Maybe it's just to mark the first stage of the Tour de France today, even if it starts in Holland this year! 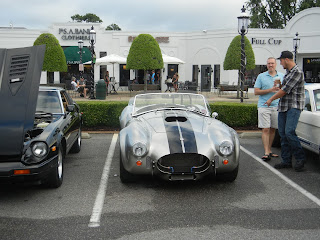 Meanwhile, back in the USA, here's a replica Cobra and an older Ford Mustang, so that should get all the thoughts of French cars out of my system for the rest of INDEPENDENCE DAY! 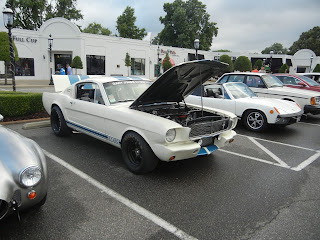 The Ford Mustang has been with us for 50 years now, and probably everyone in the country has driven, ridden, seen, or bought one at some time or another.

When I was a teenager our family had a 66 Mustang automatic, and then more recently I had an 04 Mustang GT convertible. With 260 HP I thought that was pretty cool, but of course now even the 4 cylinder Mustang (and the 6 and the 8) have over 300 HP, so that makes the 260 ponies seem kind of weak! 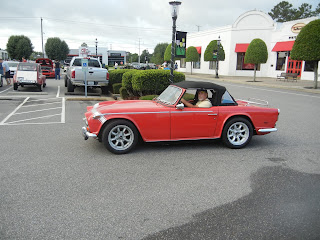 Cars and Coffee in VA Beach is an early affair, running from 7-9 on the first Saturday of every month. By early I also mean to point out that the car guys and gals are parked and already talking cars at 7am, so you have to get there early to see everything!

This nice British car rolled in a few minutes after 7 and was looking for a parking spot. 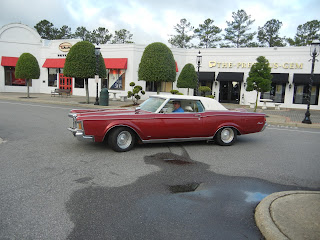 Some more classic American wheels rolling into the lot.

There were a lot of cars at this event today, and I certainly didn't take photos of all of them, but you can rest assured that there are always plenty of Corvettes, Mustangs, Camaros, Subarus, Hondas, and other brands rolling into VA Beach Cars and Coffee. 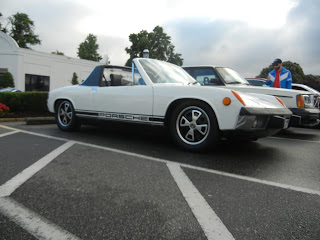 I didn't see any markings or look in the trunk to see if this is a 4 or 6 cylinder Porsche 914, but it's still cool looking to see them being driven.  In the next shot you can take a look at the small amount of room inside for the driver and passenger.

WARNING: This car may NOT contain cupholders, navigation, or support Bluetooth enabled devices. It comes from something called "last Century". 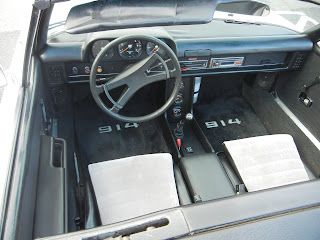 Still working on a joke where the 914 placemats are put in the wrong way and someone thinks this car is an "h-I-6".

I didn't say it would be a funny joke either. 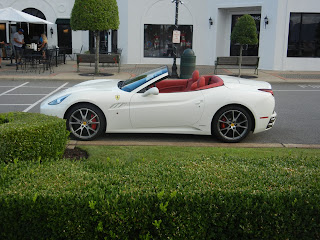 OK, so maybe you'd like a more modern, Italian, faster car? How about this little beauty, I believe it's a Ferrari California.

These are still being made, and there have been a few various tweaks to the California in it's few years of production. Basically, it's a convertible, it's a Ferrari, so if you can afford it, what's not to like?

You thought all Ferrari's came in Red? 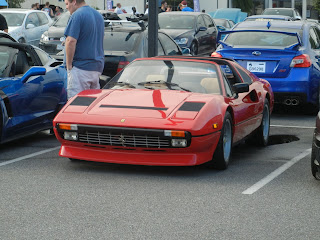 I just like to say "quatrovalvolve" because it's Italian and it means "lasagna with meatballs".

OK, it really means the engine has 4 valves per cylinder.  Happy now? 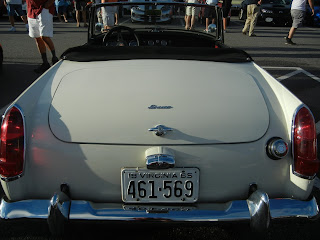 I talked to the owner of this car, and it is a 1965 Austin Healey Sprite. At some other events I've seen the earlier Austin Healey "bug-eye" Sprite with headlights centered way up high on the front of the car, so it was cool to see a later Sprite with normal headlights!

This car also had some cool chrome hub caps with large AH initials, which the owner told me were original to the car. I enjoy learning new stuff every day! 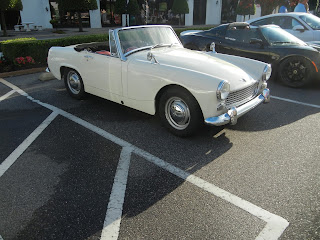 In this shot you can see the hub caps, and the front of the car with "non bug-eye" headlights!
Other cool features you can spot are the driver and passenger rear view mirrors mounted out on the bonnet (hood), and the small side vent windows on the end of the windshield.

This car also has real roll up windows. I'm not being funny about this if you know that many earlier little sports cars didn't have windows since they just had little rain curtains or attachments to their convertible tops. 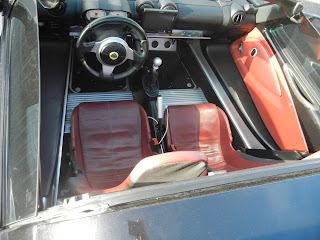 Now we're looking down into the cockpit of a recent Lotus two-seater. Like the Porsche 914 earlier, or any year Miata you might find yourself in some day, there isn't a lot of room in these things! 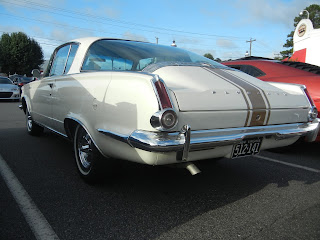 Enough with the foreign cars! Let's take a look at an All American Classic! Yeah!! Something big, heavy, and old! Maybe something from a brand that doesn't exist anymore!

How about this Plymouth with the 10 acre wrap around rear windshield!
CHROME BUMPERS!
V8 MOTOR!
(cue rock song by the group HEART) 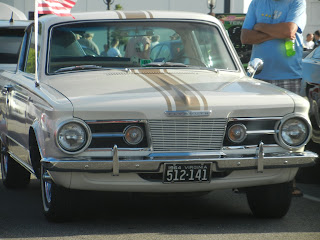 Sad but true, they don't make 'em like this anymore!

Here's the front of the 'Cuda, with cool headlights, chrome, vintage license plate, nice paint job, and even air conditioning! 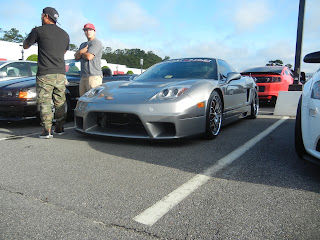 Nice low riding Acura NSX. The next NSX will come out some time next year I think, built in Ohio, and it will be in the $100,000 range. 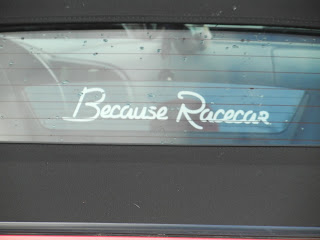 One sticker I don't have on my car is the "Because Racecar" one! "Because racecar" is everyman's answer to just about every question:

Why do you spend so much money on your car?
BECAUSE RACECAR!

Why do you need more tires so soon?