An All American Salute to French Cars! 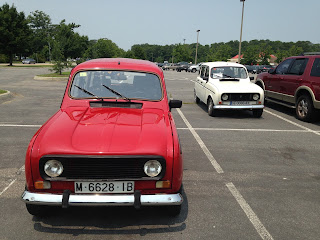 I'm going to confess right now that I know very little about French cars, but today at lunch time I spotted these two just calmly sitting in a parking lot here in Virginia, speaking French, sipping espresso, and wearing berets. They were in some deep discussion of whether or not Pablo Picasso should be known as a French artiste since he lived in Paris.

On the other hand, maybe they were really discussing this weekend's opening of the Tour de France bike race! 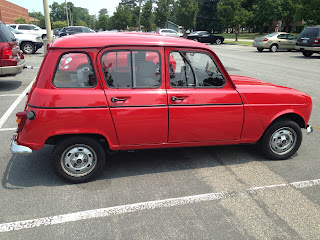 As for me, I don't have a firm stance on where Picasso sits; heck, he can sit anywhere he wants! After being intrigued by these two Renaults,  a little search on the internet tells me that these are the Renault model 4, which was produced in a lot of places for a lot of years! Here's the Wikipedia link with tons of information:  Wikipedia Renault 4 LINK 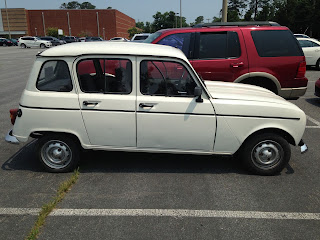 I don't think these were ever sold  here in the USA, so my guess is that possibly a Sailor stationed in Norfolk brought these home from a tour in Spain, since one of them has a Spanish license plate.

Norfolk is one of the East Coast ports that brings military members cars back home, so these might be fresh off the boat!

Even though they are small, on the positive side you really don't need a large car in Europe, and since these have 4 doors, that makes it very practical for just about anything! 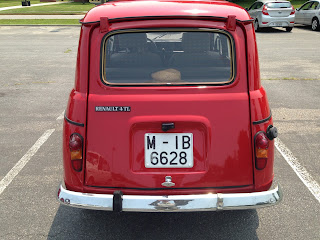 Here in the back you can see that it's badged as a Renault 4TL and still wearing a foreign license plate too. The rear door opens with the two  hinges at the top, so that should give you a big wide open access to load the back. If there are struts to prop the rear hatch open, even better!

Production of the 4 ended around 1992, but if you search the internet you can find various concept cars and renderings of possible modern versions of this car, much like the modern FIAT 500, Mini Cooper, and other classic cars that have been reimagined:   Renault 4 Link 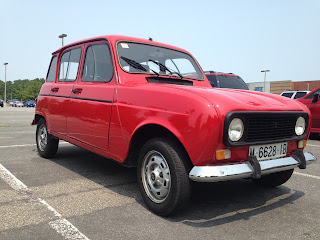 I thought this front quarter view was pretty nice looking, and you can see the small wheels. How small are they? Glad you asked, since I took a closer look in the next photo.

To state the obvious, the simple single headlights and no side turn indicators make this a low budget car that was probably very popular in it's day. Simple enough to get you from point A to point B, having a cool unique car like this to cruise around with would be a blast! 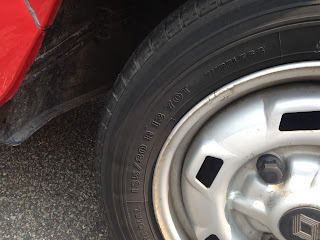 Maybe you can't quite see all the lug nuts, but there are only 3 on each wheel instead of the more common 5 or 4. Performance and price wise this might be a good way to lose weight; at least as long as the wheels stay on that is! 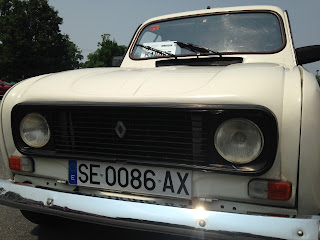 The white car still has the Renault badge on the grill, so that was cool, and here you can see the chrome  bumper is looking pretty good, as well as the E license plate from Spain (Espana) and the new Virginia paper tag up in the front windshield.

Maybe we'll see these guys driving around some time soon and get to hear what surely must be a massive engine!
Posted by robert.a.nixon6@gmail.com at 5:59 PM