Last weekend I changed the air filter and the cabin air conditioner air filter on our 2011 Camry, so please forgive the ridiculous acronym-ed title. It's hard to make anything about a 4 cylinder Camry exciting, other than the fact that it's the best selling car in the US; is totally dependable; has never had an issue; and is still going strong at about 97,000 miles. Even for drivers that are interested in racing or high performance automobiles, there's still plenty of times in life when all you really need is a car that will get the job done (wheels go round, gets you where you're going) and not break down.

Whether it's a DD-Daily driver, GG-grocery getter, or SMW-soccer-mom wagon, whatever you call a basic car, the Camry has been a great buy for us and now, after five years of payments, it's now all paid for and totally the property of Nixon Motor Sports North! Our goal is to NOT go right out and sign up for more car payments and NOT to trade it in, so hopefully we'll still pay ourselves and put what has been our car payment amount of dough-re-ME in the bank. Yeah, here's why, because then we can spend it on something more practical than a car! Practical I say, you know, like a new guitar amp or a hot-dog crust pizza from Pizza Hut!

Trust me, even if you've never done anything on your car other than drive it or put gas in it, anyone can handle these two air filter replacements, and it's likely you'll save some money doing it yourself too. I like to keep in mind that no matter how complicated car repairs may be, at the heart of it there were real people that designed it all and put it together. Although it's possible in the future that when Skynet goes active and the Terminators are on the loose in a Matrix-like word that the machines will build even cooler machines...

So, grab a 10mm socket and get to work, because that's the only tool with some new replacement filters you need for these two air filter jobs. 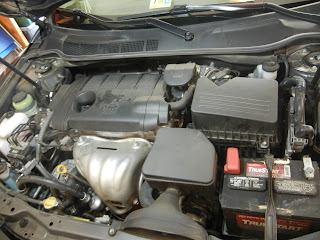 The air filter is under the upper right corner rectangle with the notch at the top, just above the battery with the red terminal cover.

It comes off easily by loosening three 10mm bolts, one you can see in the front right, one you can't see in the right rear, and then one on an air hose clamp in the upper left of the rectangle.

The air box lid is also hinged on the left side, so it lifts up and out of the way easily. 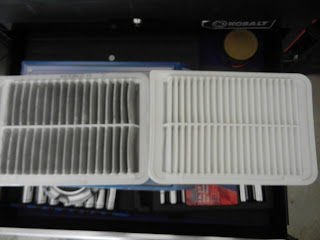 Quick, guess which air filter is the old dirty darker one on the left and which one is the new clean whiter one on the right?

Hope you got this one right!
(hint: it IS the new clean white one on the right)

Both of these were made in China, but keep in mind that the Camry, built in Kentucky America, has the  highest percentage of US made parts of any vehicle sold in the US. You can look it up! 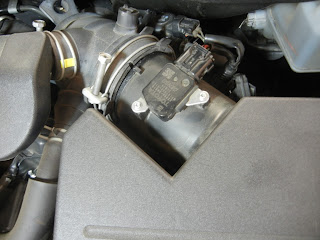 This is just a bit closer view of the clamp over an air hose that has to be loosened, it's just left center in this photo.

Once that is loose, you can easily pull the hose sections apart and then lift the air box cover out of the way.

As they say in the car repair manual business, then you put the new filter in and put it all back together in reverse of how you took it apart. 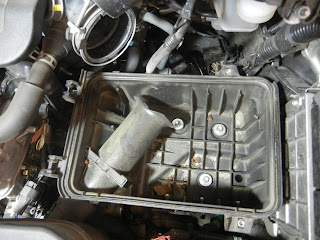 Here is the inside of where the air filter lives, just a big box with one bit of air hose sticking in that draws air in from the front of the car.

You might notice a bunch of what mechanics call "stuff" in the bottom of the box, such as dead bugs, bits of leaves, etc.

I pulled out a vacuum cleaner and took out the big chunks, then threw away the old air filter and put the new one right in here.

After that, just replace the lid, connect the hose in the upper left, and you're good to go. 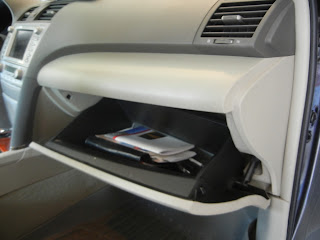 The engine air filter was easy, and this next one in the glove box is going to be even easier, because you don't need any tools!

Step 1: Open glove compartment. (no, I'm serious, that's how you get to the AC air filter)

Before moving to Step 2, I'd suggest removing all the manuals, napkins, forks, and whatever else you have in here. Does anyone keep gloves in their glove box? 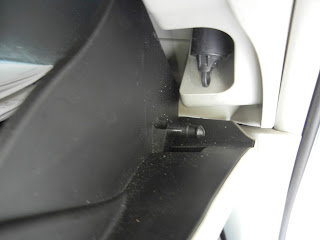 Step 2:  On the right side of the glove box, unhook this latch. In this photo, I've already  unhooked it, and the hook kind of receded back into it's bat cave a bit, which is normal, since it seems to be on an elastic cord. 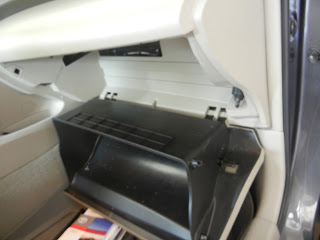 Step 3:  On both sides of the glove box, you have to push inwards on the black parts so that two posts (one on each side) will clear the slots that they sit in. Once you've pulled them out, the glove box just hangs down like this.

Don't worry, it's supposed to.

You'll see how it's just some plastic bits sticking into other plastic bits that hold it in place, and you don't have to mess with the hinge at the bottom. 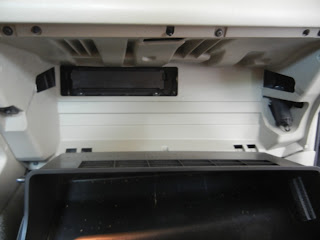 Looking straight on in to where the glove box used to be, in the upper left you see a black rectangle with a cover on it.

Step 4: Pull the black cover out of the rectangle, and then you'll see the air filter. 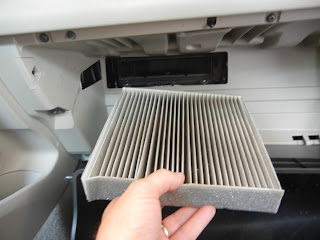 Step 5: Pull out the old air filter, and put the new one in. I don't think you can mess this part up, since the filter is a rectangle.

Assembly is the reverse of dis-assembly! (Note to self, make a t-shirt with this motto, sell a lot, become a millionaire)

Your owners manual should spell out how often to replace these two filters, and you can do it all yourself with nothing more than a 10mm socket!
Posted by robert.a.nixon6@gmail.com at 5:44 PM