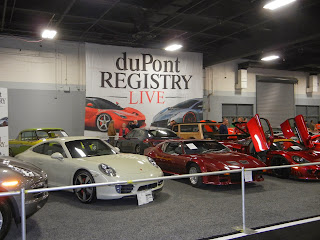 In our last blog post, Brian talked about his visit on Saturday with test drives of several new cars.  Today I visited the show in Greenville, and while I didn't test drive anything, I had a good time walking around and looking at a lot of new cars. Also looked at some old cars, since there were displays from a few car clubs in addition to the dealerships that were showing the new stuff.

With a bit of a mix of old and new, from the first picture here you can see that the folks from the duPont Registry were promoting their magazine which features high end automobiles. On display were several Ferraris, a Maserati, two Teslas, some Porsches, a Lotus, the DeTomaso Pantera that Brian pictured in his post, and a nice Saleen. Not a Saleen Mustang, but a Saleen, which is the red car with the Lambo style doors sticking up in my photo above.  I'm pretty sure I will never be able to afford any car in their magazine, but it has been fun to look through the free copies they were handing out! 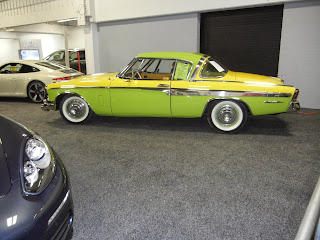 Also on display was this Studebaker President.  I believe the placard said this two tone paint was the original style, so let me just say that in my list of favorite things in the world that lemon-lime works in a drink, but not on a car. 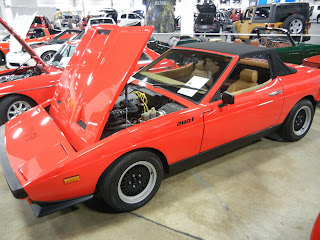 The fine folks at the Foothills British Car Club had a lot of nice older British rides on display, including this not often seen in this country TVR.  They had two of my other favorite oldies the MGB GT, which was a hard top version of the MG.  Right behind this TVR is a red MGB GT, so to be fair to other colors, here's a non-red one: 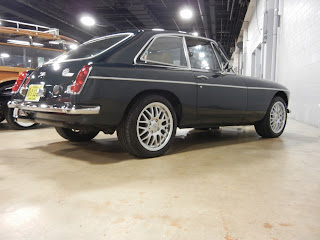 OK, what new cars did I like?  How about the latest version of probably the longest running American sports car, the new Chevrolet Corvette Stingray?  I think it's pretty exciting that they brought back the Stingray name, and I'm not really even a Chevy guy, but for an American car that has performance that can rival the $100,000+ European cars and costs starting around $50,000, you've got to appreciate what the Corvette brings to the table! 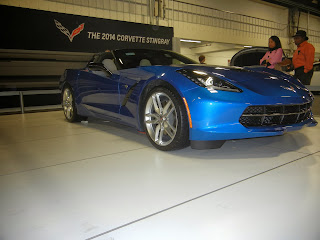 Speaking of not being a Chevy guy, I'm a big fan of the Ford Mustang.  Just recently they have unveiled what will be the 50th anniversary 2015 Mustang, but we didn't get to see one today. The next best thing was a 2014 Mustang GT, and what got my attention was that one of the options is for Brembo Brakes.  Brembo is probably the biggest name in making fast cars stop quicker, so this was impressive to me. So much gets written about how fast cars are from 0-60, or if their top speed is over 200mph, and how many horsepower make it go faster, but in high performance driving I'd have to say that how well you can slow down is just as important. 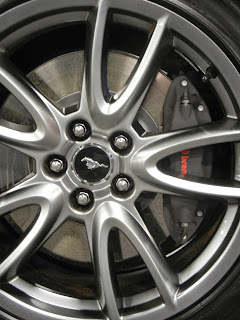 Now that I've mentioned brakes, it's time to stop for now.  Stay tuned for an upgrade on the NMS Fiat in the near future.  Thanks for reading!
Posted by robert.a.nixon6@gmail.com at 6:48 PM