No, this isn't the "Weekend Update" from Saturday Night Live, although I'm a big fan! My weekend was centered around two car events. First up, the Formula 1 race from Imola, Italy was on ESPN at 7am, so that was a blast to see racing from the track named for Enzo and Dino Ferrari. This was the third race in Italy this year, on three different tracks. While it would be fun to report that Ferrari won all three races, well, they didn't.

After the race, I headed out to Oyster Bay NY and a local Cars and Coffee event sponsored by our friends at El Gato Engineering. You might have read a blog post from when they installed new springs and Koni shocks on the NMS FIAT Abarth, so it was a blast to get out of the house and check out some cars. This was a few miles down the road from Teddy Roosevelt's house, but I didn't bump into any members of the former President's family. From seeing a car used by Mr. Roosevelt at the Henry Ford museum in Dearborn MI, I don't think he was a big fan of the automobile.  Thanks also to a sponsor of this event, the awesome IT Bagel and Pizza of Oyster Bay. Today I enjoyed their hot coffee! I recommend you check them out.

We don't make any money from this blog (or from our racing of course!) but we do like to share information like great auto-related businesses and their friends, especially during the pandemic, so if you're on Long Island:

IT Bagel and Pizza

One of my favorite things to say is "here's something you don't see every day," and usually it's sarcastic because it's something you NEVER see. Here's two cars I had never seen before, one from Japan and one from Italy.

Judging by the 1964 license plate, and the badges, I'll guess it's a 1964 Alfa Romeo 2600, with body by Touring, complete with hard top. I haven't Googled it yet, but I'll also estimate that there aren't a lot of these driving around in the world, much less in NY! 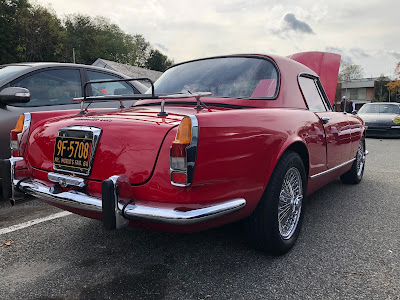 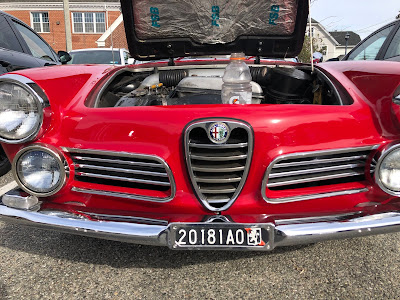 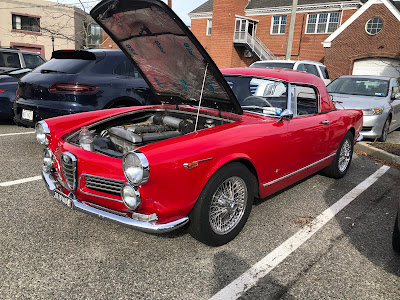 Here's a 2nd car you don't see every day, I'd never even heard of the Toyota Sera. This is a 1990 Japanese Domestic Market (JDM) car that was recently imported to the US. After 25 years, US law allows you to import automobiles that were never sold here, and therefore never met any US safety or emissions standards. I went ahead and Googled this one. They were built from 1990-1995 or so, and share many parts with other Toyotas from that era you might have heard of, like the Tercel and the Paseo. The owner told me he bought this from an importer in Richmond VA, check out their website or look for them on Facebook: Japanese Classics


Those two unusual cars were the highlights for me, so here's a quick look at some of the other cars. El Gato Engineering does a lot of work on the Focus RS family, and there were plenty of Ford faithful fans out today, along with some Porsches, Alfa Romeos, and a few others.