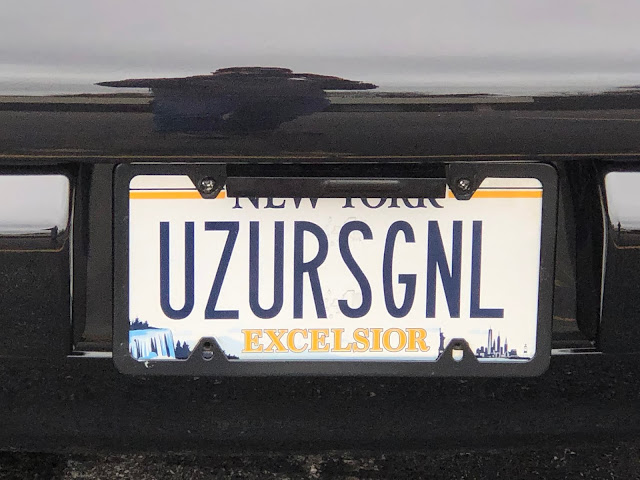 Not talking about detailing your car here. Not talking about in the military doing details. Just the many, many details, parts, and interesting little things you see on automobiles. In other words, a quick look at some other "stuff" spotted at a recent cars and coffee. For some reason, I'm interested in license plates that have a message or personalized meaning. Some can be hard to figure out, some are very easy, and I like this one because it also includes a safety message for drivers: USE YOUR SIGNAL!

If you have a really cool exhaust system, it might have a logo on it like this one from Akropovic. They are my favorite Slovenian based car and motorcycle exhaust system company! OK, maybe the only one, but since being started by Igor Akropovic, they've developed a world wide following. You can read all about them at this link: AKROPOVIC STORY 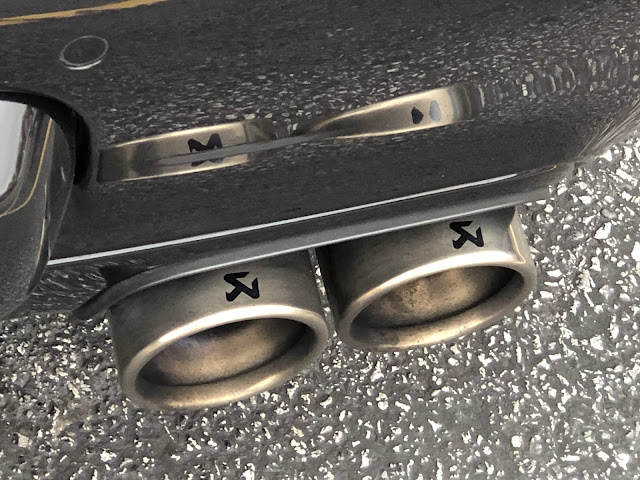 Your car probably has badges, logos, and even a hood ornament on it. Just maybe you've added some extra badges, like this Porsche owner and their "flat 6 club" since a lot of their cars have flat 6 cylinder boxer engines. 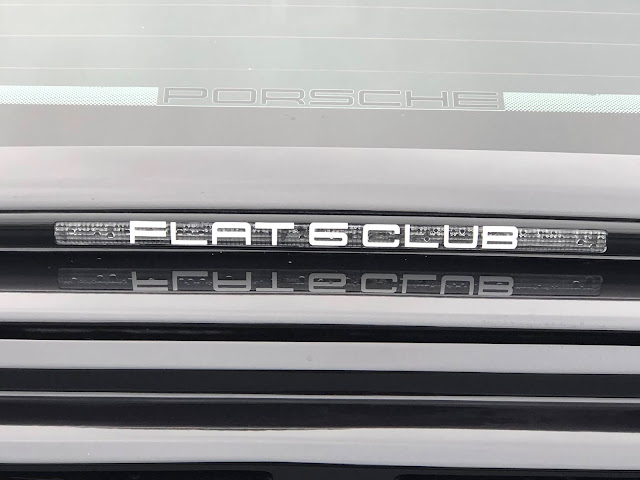 All race car drivers know that every sticker on your car gives you five more horsepower, and if it's a sticker from a new defunct Long Island racetrack, I'm going to give you 10hp for this one! Earlier this  year I drove out to the site of the Bridgehampton Race track, so while there isn't much left, it's still a popular photo shooting destination if you can get past the private golf club security guy! Here's a link to the Bridgehampton Racing Heritage Group with a great history: Bridgehampton History 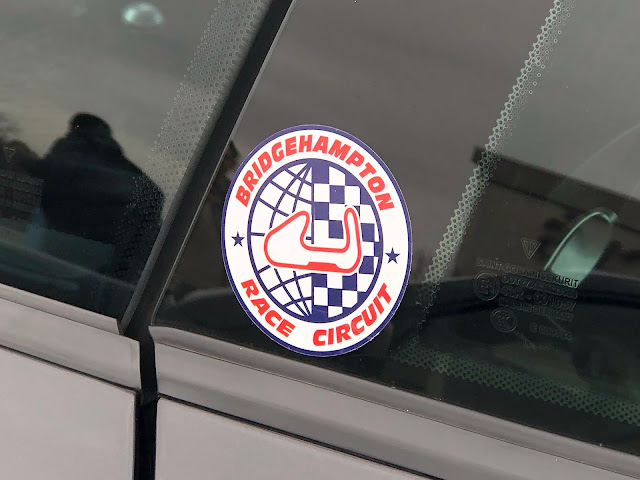 This red Mercedes has several cool details, with the intake there, and then the wild windshield wipers. Once in a while you'll see a car with only 1 wiper, or even an old MG or something with 3 wipers, so this one with an unusual sweeping pattern caught my eye. 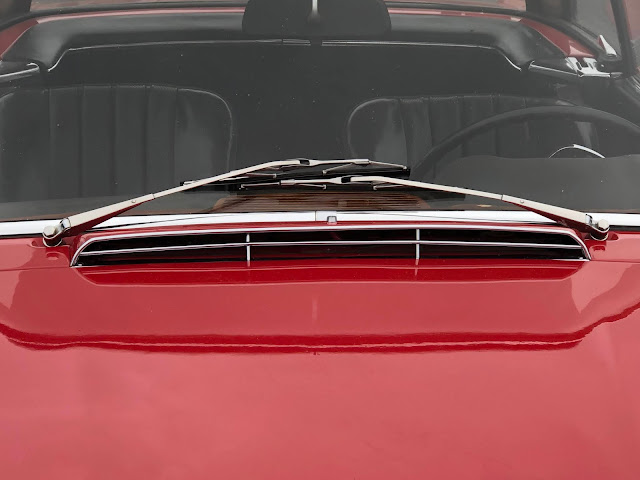 To be  honest, I'm still amazed to actually see that people buy cars like Aston Martins. I'd never even seen an Aston Martin dealer before I moved to NY, and now there's one a few miles from my house! Anyway, the detail that got me on this one is that with all the cool leather and how great the car looked, there is a little hook behind the driver seat, where I guess you could hang your coat, or your baseball hat, or maybe your lunch box or something. Since we keep seeing James Bond in Aston Martins, what does 007 hang back there? 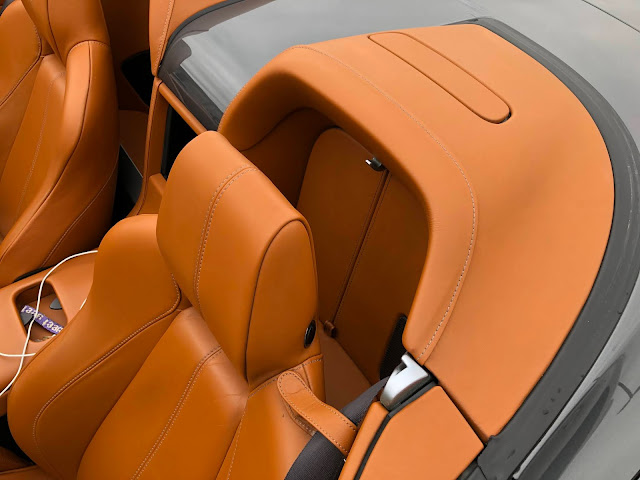 This older Porsche 911 starts with the obvious detail that it's a rear engine car, so seeing the rear hatch open to display the trunk is really cool. I don't know how you work on this thing, other than "carefully." 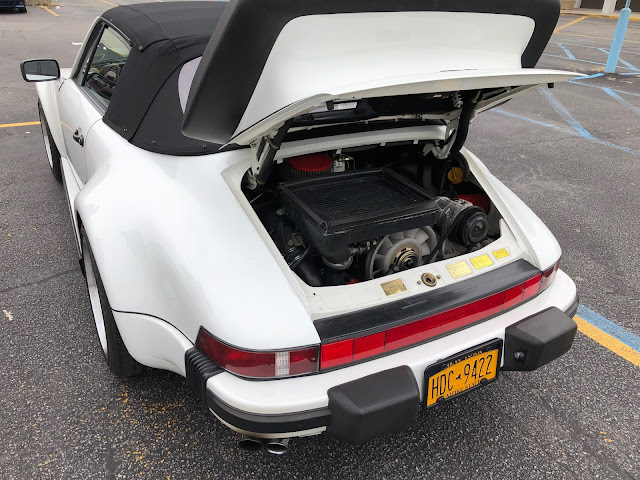 Another Porsche, this one is a GT3 with Martini inspired racing stripes. The wing is very cool too, but the detail that stuck out for me is the two black air intakes under the wing. Most Porsches I've seen have air intakes on the side of the car for the engine, with other intakes up front with the radiators. When you put the engine in the rear, you've got to get creative to cool things down and add all the fancy aero features. 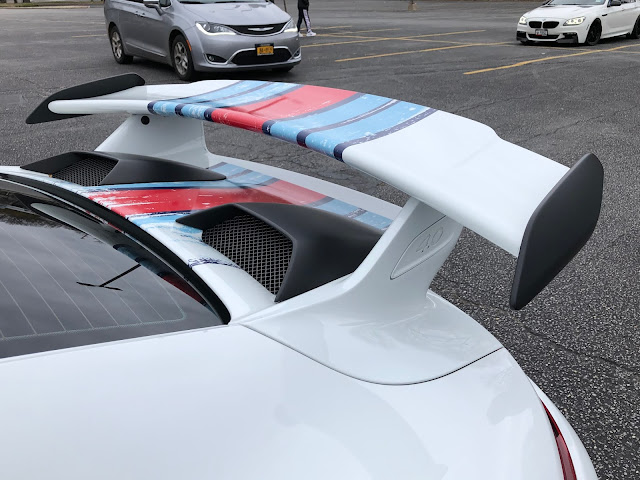 I'm still learning about Porsches, and had noticed that they generally have the gas tank filler on the front right fender. However, looking at this detail, today I learned that some of them have the fuel door on the left front of the car. Shows what I know! 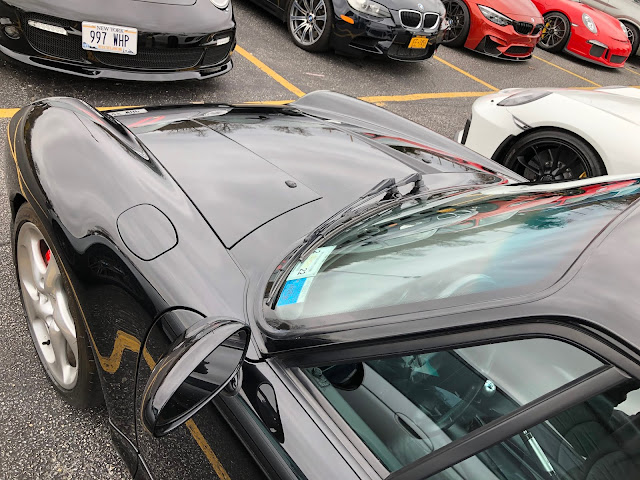 You can Google as well as I can if you want to learn more about the Porsche GT2RS, but this photo is all about the interior detail. Specifically the GT2RS on the rear seat divider here, looking through the window behind the driver's seat. Just in case you forgot what model of $300,000 car you're driving. 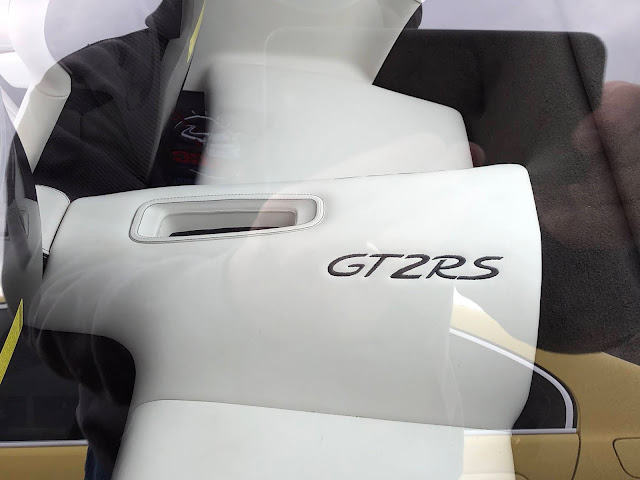 Another cool car on my holiday shopping list is the Audi R8, especially if it comes complete with V10 motor. Here we're looking through the rear glass at the motor, conveniently labeled with V10 and FSi. You can pick up one of these for a bit under $200,000 on your way home from work tomorrow! I had to look up what in the world FSi means: Fuel Stratified Injection. Ha, I learned something new today! 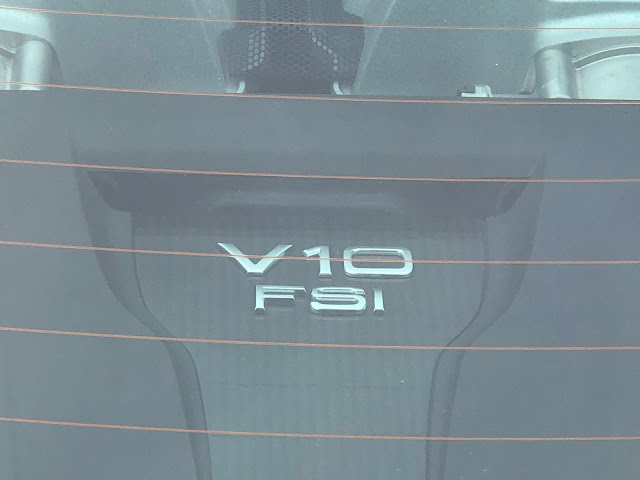 The detail in this NEXT shot I noticed after taking it. I was really focused on that wild looking green Corvette in the background. After looking over my photos later I realized that the passenger sitting in the BMW in the foreground makes it a much better photo. If you can't be good, settle for lucky! Also a reminder that as interesting as cars can be, it's the people that design, build, and drive them that are what it's all about. 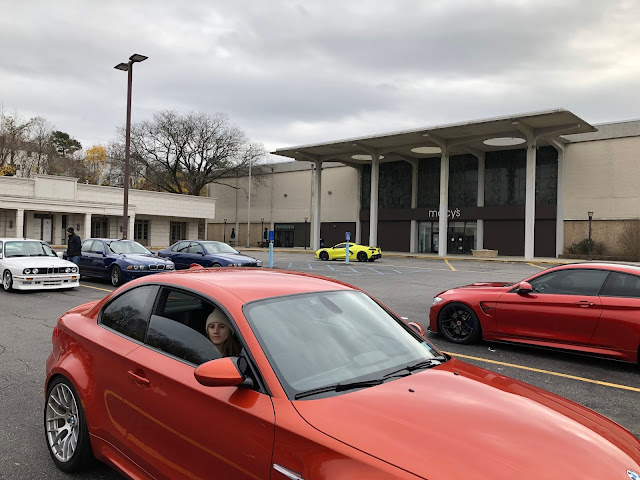 Looking at wheels can take up a lot of time, although I really often don't care about wheels too much. These from BBS caught my eye, with the "Motorsport" near the center, and the red BBS logo in the rim. OK, now I'm really looking, and notice that they are very clean wheels, and you could probably read the size of the tire if you really wanted to, or clicked on the photo to make it larger. 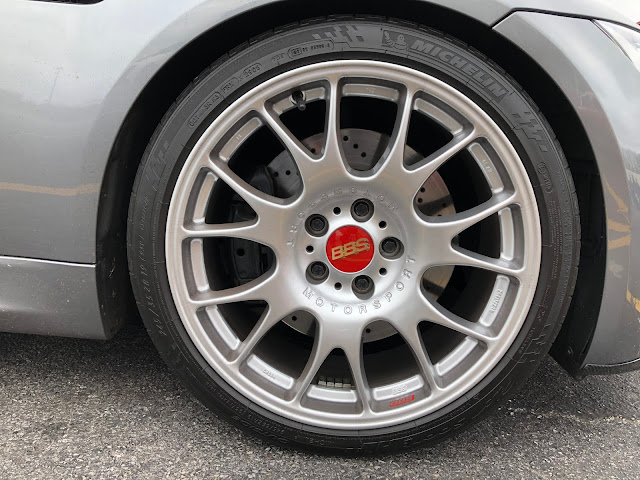 Other than the crazy color of this brand new Corvette, I could have zoomed in on some more details on the rear here. On the center black stripe is a black sting-ray, which always makes any Corvette cooler! Also, in very small letters below the right tail light are the letters Z51. According to my Internetting, that means that for a few extra dollars:
"The Z51 package brings a performance exhaust system to the table, boosting output to 495 horsepower and 470 lb-ft, along with performance suspension, an electronic limited  slip differential, front splitter, rear spoiler, larger Brembo brakes with four-piston calipers, Michelin Pilot Sport 4S tires, a different axle ratio and front brake cooling ducts." 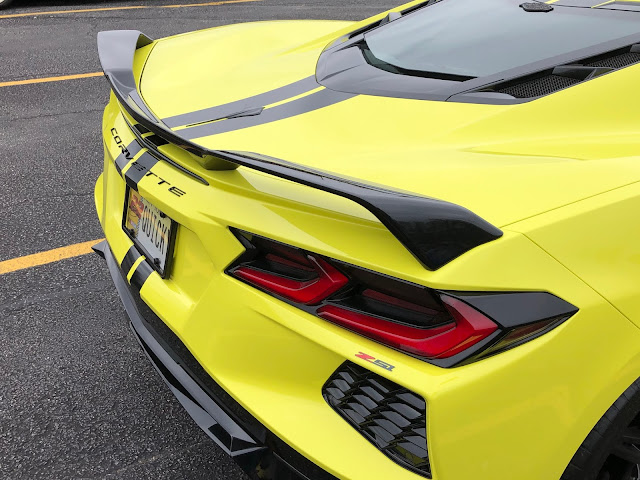 This Porsche (one of 1,000 GT2RS models) even has leather front trunk. Wow. 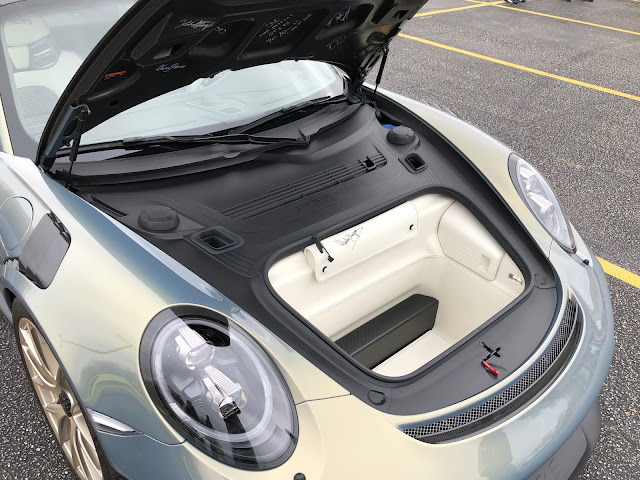 This BMW caught my eye for the simple fact that it's a convertible with the windows up, a wind screen behind the front seats, and then a cover of some sort over the back seats. When I had a convertible I'd make fun of other convertible drivers if they didn't have the top down, and also if they had all these other things to keep them out of the wind. It's a CONVERTIBLE, and your hair is supposed to be blowing all over the place! Detail wise though, there are some little pins holding the wind screen in place, and it makes this car way cooler if I pretend that they are pins from used grenades. 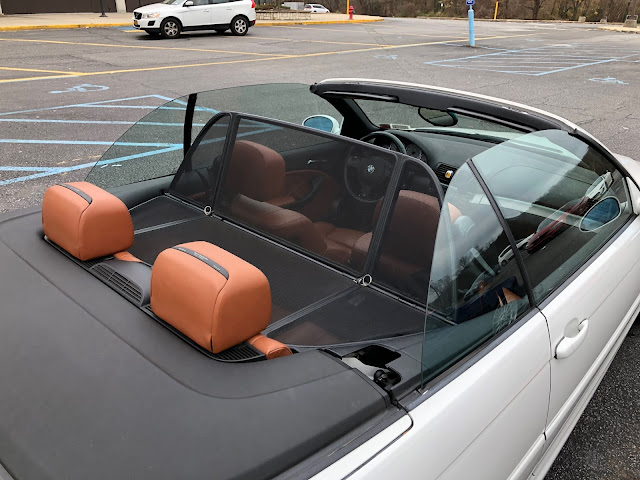 That's what I saw at the Cars and Coffee. BUT THEN......on the way home I saw this Lamborghini, with a FIAT 500 going through an intersection, so that was a fun detail if you like black Italian cars. If I'd been really obnoxious I would have gotten a photo of the McLaren I saw a few blocks later, or the Bentley up the road from there, but I didn't bother. 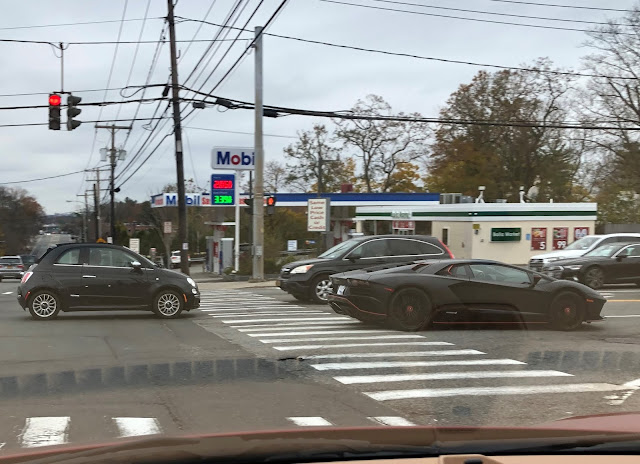