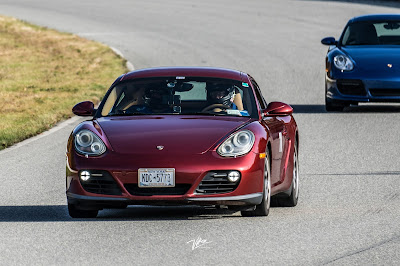 Make the car go faster? That, in a nutshell, is all you have to do as a driver on a track. So easy a Caveman could do it, if he had a car. From my Track Addict app, I was able to get my lap times from a recent track weekend, so here they are, a bunch of numbers from Saturday and Sunday. Keep in mind that the fast guys were way under 2:00 per lap. Each of the 5 sessions per day is split up below. The first session of each day was just following and no passing, and as you might expect those are the slowest overall times. I was thinking that my fastest times would be in the last session of the day, but it was actually in the next to last sessions, go figure.
Long story short, my best lap on Saturday was 2:04, and then on Sunday the best time was 2:02. Since I started Saturday morning with a slow 3:01 on a damp track with no passing, and that for the rest of the weekend things dried up, I guess I made the car go faster. Mission accomplished! I will point out that a better driver would have been much more consistent with their lap times, so that's what I'm working towards.
Breaking it down even further, the app splits the track into 5 different sectors. I could show you all 5 split times for all those laps, but that wouldn't exactly advance the human race much further, so I'll just give you my best single lap, and then my best "theoretical" lap made up of best individual sectors.

Comparing Saturday and Sunday, it was good to see some improvements after getting more familiar with the track. While there were plenty of other variables that affected some of the laps (like being behind other cars) I had fun trying to figure out how, and where, to go faster. Another great tool for learning to go faster is to go to YouTube and find videos of drivers on any one particular track, because you can see how they attack each corner, and compare their speeds to mine.