Odds and Ends from "The Henry Ford" 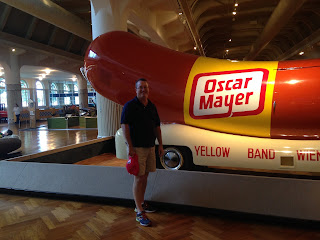 I don't really understand why this MUSEUM is named "The Henry Ford" so I'm just going to move on and hit some of the highlights that you can see in this MUSEUM in Dearborn Michigan. Of course THE Henry Ford was the guy that started the Ford Motor Company, and unless you've been living under a Communist rock driving a Russian car or a Trabant your entire life, odds are that you have some idea of who old Hank was, what he did, and just maybe you've driven one of his company's products. For me, I've owned an 04 Mustang, a 97 Ranger, and a circa 90 Aerostar van, and overall I've been happy with the Fords that I've owned.


Also, thanks to the Ford folks for offering free admission to active duty military to this museum.


Anyway, the MUSEUM houses just a wide variety of Americana, not just cars, so if you'd like to see some furniture, the only Dymaxion house still in existence, a couple of Stradivari violins, one of the Spirit of St. Louis airplanes used in the Jimmy Stewart movie about Charles Lindbergh, and various other bits of US history, then The Henry Ford MUSEUM is the place for you! 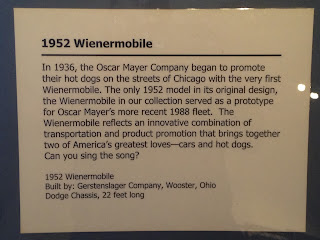 What's more American than a 1952 Oscar Mayer Wienermobile? They even had little Wienermobile whistles in the gift shop, just like the ones they pass out when you spot the Wienermobile out in public. The Oscar Meyer car in the museum (oops, I mean "at The Henry Ford") was built in Wooster Ohio, home of the famous College of Wooster, which is mostly famous for their initials COW.

After learning so much about the Wienermobile,  we went to the little food stand right there and ordered up some hot dogs for lunch! 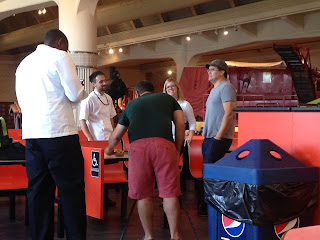 So while we were sitting here eating some groovy hot dogs (I recommend the Deeetroiter with coney sauce!), we noticed these folks at a nearby table. Looks like The Henry Ford folks were updating the photos of their hot dogs for the menu!

The guy on the left in the chef coat was assisting camera guy in the black shirt, and they were busy adjusting the various hot dogs on the table, focusing the camera on the tripod, adjusting the condiments on the dogs, etc.  Show business!


While we're on the subject, I can recall that my relatives that grew up in Detroit always made fun of people that pronounced it "DEEE-troit", since apparently the correct way is to use a short "e" sound, as in "Duh-TROIT". Sounds good to me, and makes the hot dog stand's name of "Deeetroiter" even funnier. 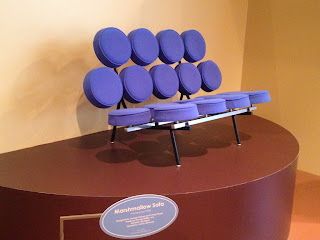 Not auto related, but the displays of furniture designs were interesting, especially this "marshmallow sofa" designed by the husband and wife design team last name of Eames, The exhibit explained how they designed some well known furniture for the Herman Miller company, although I don't know if this particular design was a big seller.

Somebody has to come up with all the items we use every day, and the design of those items is an art unto itself. 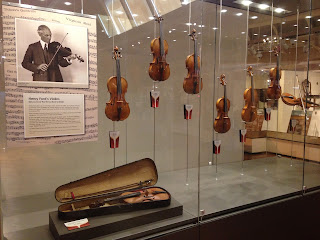 Henry Ford became very rich, and just what can you do if you have more than enough money? You might buy a cheap violin (the one in the case) and learn just enough to play a few fiddle tunes. If you're Henry Ford level rich, you just might go out and buy the best violins on the market, like these in his collection. The first one hanging on the left is an Amati, and then the next 2 were built by a Mr. Stradivarius. 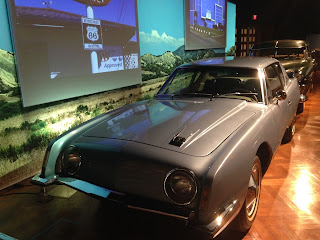 One of the special exhibits was a collection of photos taken over decades that captured the images along old Route 66 and the earlier days of travel in the US. As part of the display there was a root beer float stand too, but since I'd already had a hot dog I didn't spend the $6 for a float.

The Studebaker Avanti was set up with a changing slide show of various motels, gas stations, and other touristy-trappy kinds of things. 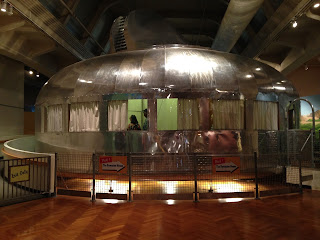 This is the only Dymaxion House remaining. Mr. Buckminster Fuller envisioned a new kind of house that could be easily manufactured from space age materials, shipped anywhere in the US, and then assembled easily either alone or in entire Dymaxion cities. Unfortunately, the company that was going to build these homes was about $10 Million short, so only one was ever built and lived in by a real family. That home was later taken apart and donated to the museum here, and you can walk through it too.
His geodesic dome would later be a bigger hit. 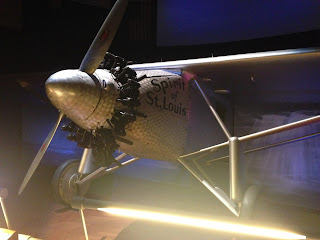 For the Jimmy Stewart film about Charles Lindbergh and the first solo flight across the Atlantic, this is one of the planes built that was used in the movie.

There were more airplane exhibits and cool planes hanging from the ceiling on display, but to be honest we moved on to find some more food and more cars! 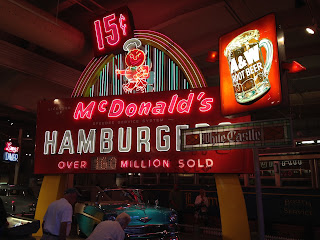 Behind the McDonald's neon sign is a real diner, and they have VERY good cake and coffee. We tried the chocolate cake and the carrot cake, and I would highly recommend them! 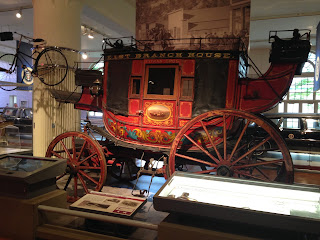 Stagecoach. If you've ever wondered how the stagecoach drivers tracked their miles, well, of course they had an odometer!

Check out the next photo for a bit of info on the stagecoach odometer, built in 1879! 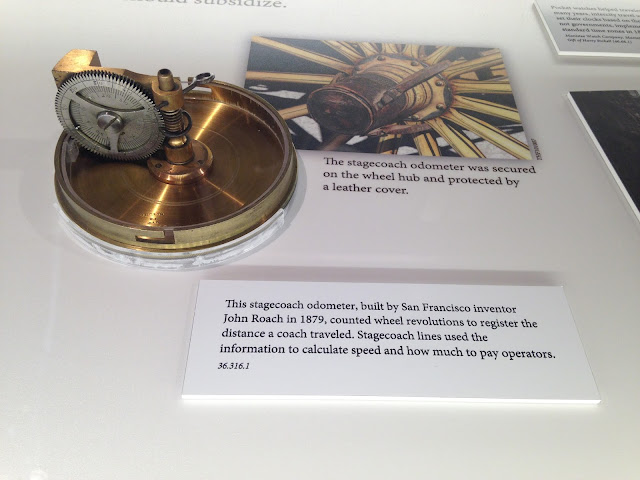 I thought this odometer from 1879 for a stage coach was really cool. If you can read the sign, you can see that this device was mounted on the wheel of the stage coach so that the number of revolutions and therefore mileage could be calculated. This is probably pretty similar to how they work today, and a lot easier than having someone drive next to you every trip and count how many times your wheels go round.

Next time on the NMS blog, nothing but CARS from THE Henry Ford!
Posted by robert.a.nixon6@gmail.com at 5:43 PM