This is Part I of "What I Did On Summer Vacation", so stay tuned for future episodes that will  highlight the Gilmore Car Museum, The Henry Ford (Museum), a cruise in that took place in Grayling Michigan, and a few various episodes highlighting the 100,000th mile in our Toyota Camry, and my opinions on the best places to buy a new car battery for a Camry with 99,000 miles in Milwaukee! 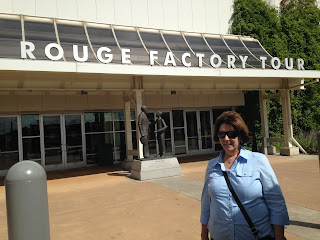 I'll just state up front that I'm a big fan of seeing how things get made in factories (by other people), and will spare you the details of other non-car related tours I took on vacation such as the Miller brewery and the Great Lakes Distillery in Milwaukee. We also visited the Harley Davidson museum while in Wisconsin, but only visited the gift shop, so here's a token shot from that short stop: 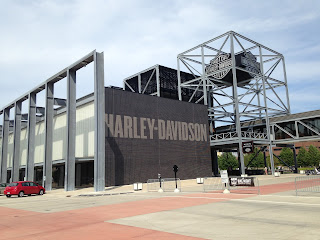 Not far from downtown Detroit, in the hamlet of Dearborn, stands a whole lot of Ford buildings, factories, offices, and the Henry Ford Museum, Greenfield Village, and the ticket office where you can get your ticket for the Rouge Factory Tour, and see some of the 1200 Ford F-150 pick ups being built on an average day. After buying a ticket and taking a short bus ride, we arrived at "The Rouge", on the Rouge River, where Ford has been building various models since about 1927.
Unfortunately the Ford folks don't let you take photos inside the actual tour, but they do have a very nice bunch of displays, two movies, and of course a gift shop (smaller than I expected) in addition to letting you  walk inside the factory on a catwalk up above the production floor. While the tour doesn't let you see most of the building of trucks, we had some views of workers putting in some trim pieces, headliners, tail lights, and we saw part of the area where the trucks get their final inspections and get driven away. Probably the coolest thing we could see was two robots installing the front and rear windshields at the same time.

The first movie on the tour tells a quick version of Ford history at the Rouge, so that covered the basics, but if you're looking for a lot of detail on Henry Ford, his company, or all the models they make now, you'll have to find it somewhere else. I guess that's a good thing that it wasn't a 100% "WE'RE SELLING FORDS" during the tour, but to be honest I expected a little more info on what was going on. Even walking around inside the factory didn't have a lot of info on what was going on.

The second video or multi-media presentation went into some detail of developing the new aluminum truck, chock full of loud music, lasers, fog machines, robots, etc. I would have been  happy with a normal person just explaining some of the info, but I'm sure kids would think this show was cooler.

The Ford tour had one thing the BMW folks did not have, and that was a trip to the roof of the building to overlook the area, take photos, and allow the tour guide to explain all the cool environmentally friendly initiatives that Ford has going on now. The view was nice, it was a cool break from the rest of the tour, and well done.


To summarize, the only other car factory tour I've taken was a lot different and I think better than the Ford tour. It involved walking on the floor of the factory, seeing lots of the assembly going on, tons of robots all over the place doing welding and other cool stuff (from a safe distance of course).  The other tour also had us in a group with a tour guide who was explaining what we were seeing, and as a bonus this was through headsets and headphones that we all had, so it was very easy to hear even in the middle of an assembly plant. Call me prejudiced, or just limited by these two experiences, but I have to give my "BEST AUTOMAKER FACTORY TOUR AWARD" to the folks at BMW in Greer South Carolina.