﻿
﻿
While the NMS team is getting into the HOT time of year, all the way from Virginia Beach Virginia to "Famously Hot" Columbia South Carolina, today Nixon Motor Sports announced the acquisition of a new shade-rendering-light-weight portable-device that will be used in upcoming autocross events. The average auto-cross or track day can have us outdoors from say 7AM to 5PM in the hot summer sun, and in addition to drinking plenty of water and using sunscreen, it's mighty nice to have just a little bit of shade once in a while too!
﻿
﻿
﻿
﻿

﻿
﻿
Remember that most autocross events are held in large parking lots. Large parking lots with no shade. No shade but with lots of sun and heat reflecting off of the concrete or pavement. Concrete and pavement that gets warm! And by "warm" I mean "really darn hot"! Maybe not "120 degrees for 6 months like when I was in Iraq hot", but they didn't exactly have any autocross events going on there so I came home!

So, the canopy makes for a nice place, mostly for the driver to sit out of the shade for the short amount of time that we aren't busy prepping the car, shooting photos, working the course, driving the car, or otherwise engaged.

And on the rare rainy day, it just might provide a bit of what scientists call "dry".
﻿﻿
At NMS South the blue canopy has served us well at many events, and Brian likes to stabilize it with a sandbag at each corner. That might sound like overkill, but at one event this year I saw a non-stabilized canopy like this get blown up against a very nice blue Subaru that instantly was modified into a "very nice blue Subaru with a foot long scrape in the paint where the canopy leg gouged it thanks to the wind".  On a related note, the national news tonight showed a story from Florida where a surprise gust of wind blew a bouncy house (with some kids inside of it) up into the air! The kids were mostly OK but had a heck of a scare and maybe a few broken bones. You can't mess around with the wind when you're outdoors.
﻿ 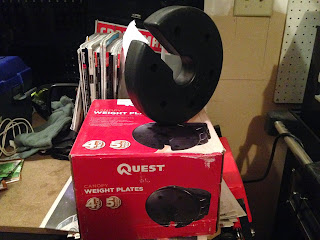 NMS will utilize the latest in canopy technology with it's latest summer upgrade, say hello to the 5 pound canopy weight! One set of four weights should anchor the canopy in anything up to Hurricane force winds, a category 4 tornado, and against the fire breath of Godzilla should be invade the east coast during an autocross.

The FIAT might blow away, but the canopy will survive!!

Enjoy your summer and beat the heat, be safe, and get out there driving!