In autocross action on the Chesapeake Bay on Sunday May 17th, the NMS FIAT finished 2nd in it's class against a Ford Focus ST and a Chevy Sonic, but still, a good time was had by all! In a few days we should see the final results and I'm interested to see how my PAX time stacks up against the other 130 or drivers, hopefully in the top 50% at least.  For now, here's a few highlights of the scenery on the Chesapeake Bay, and some cool cars spotted. 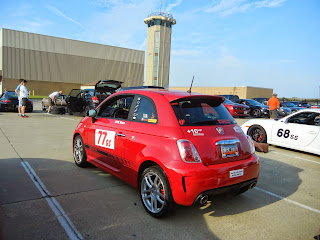 Here's my (favorite) car, the FIAT ready for competition early in the morning. There were 4 run groups today, and I drove in the 3rd group, which also meant that during run group one I was working on the course. It always feels great to get to watch other drivers before competing,  to see how they drive the course and pick up some ideas on  how to do it later! 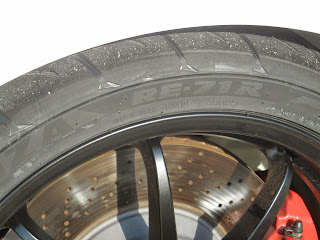 I was parked next to a Porsche driver, and he told me that he'd just gotten these Bridgestone RE-71R tires put on the front of his car this week. This is a new tire in 2015, and I've heard some great things about it from on line reviews and in Grassroots Motorsports magazine.
Improving your tires is the easiest upgrade to any car to make it perform better on the ol' autocross course. If you are made of money, feel free to compete on racing tires that cost $250 each. The rest of us normal people have a pretty good time going just a bit slower with a bit more money in our pockets. 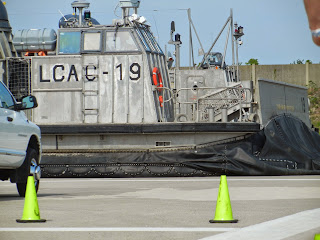 From now to October, the TSCC events will be held on the Joint Expeditionary Base Little Creek and Fort Story (or JEBLCFS, or just Little Creek). What makes this very cool is the backdrop of these Navy LCAC air cushioned vehicles, since we're driving on their concrete pad that leads right down to the water.
Maybe a huge autocross with these hovercraft driving would be fun.
On second thought, maybe some cones made out of concrete so they don't blow away would be a good idea too! 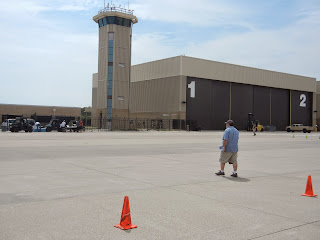 Here's a look at one of the hangars or bays where the Navy houses the LCACs (I assume).

You figure it out, I give up. As an Army guy, I always guess D. 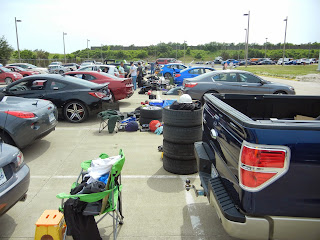 Outside the course, and away from the grid where drivers line up before competing, is this mysterious land known as "a parking lot", which resembles "a yard sale".
Before competing you have to empty your car of all that extra "stuff" that might get airborne or jam under your brake pedal under hard driving. Out go the spare tires, floor mats, coolers, food, garage door openers, dogs, Burger King wrappers, etc.
Some drivers will swap wheels for the event, so that explains the tire stack by the truck too. 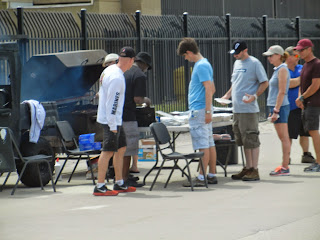 Most of the drivers arrived at the event about 7:30 (or 0730 in military time, almost known as "Zero Dark Thirty" but not really that early), so before long most people think that having something to eat will be a great idea! Along with allowing us to drive on base, we're happy to support the Navy and Marines there by buying burgers, hot dogs, chicken sandwiches, and drinks on site. It was a pretty long and hot day, so the food and drink were appreciated. 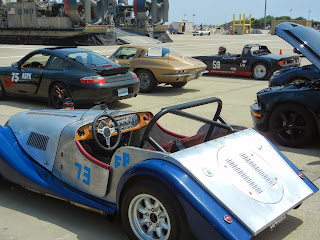 Time to look at some more cars. During two of the run groups I didn't have to work or drive, so I love walking around and shooting some photos of interesting cars.
Here in this one shot you get (closest to camera) a 1958 Morgan from England, a black Porsche from Germany, a mid sixties Corvette from 'Merica, and the short black modified Porsche 914 also from Germany. England, USA, Germany, kind of a WWII re-match, but I think the Germans had faster times. 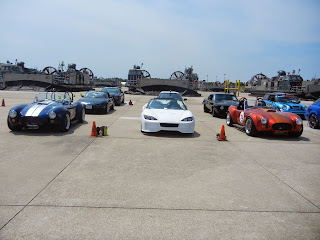 I'm a fan of the Factory Five cars like these, and it's always cool to see folks that really drive their cars and don't just polish them and bring them out of the garage for a car show once a year. 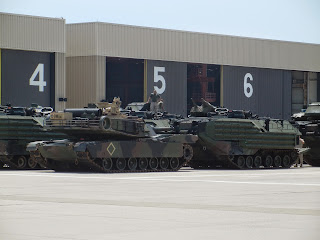 One of the drivers that is in the Marine Corps was telling me that he just returned from a deployment on a ship that held some of these Marine amphibious assault craft. If you click on the photo and look close though, you'll notice on the left is also an Abrams tank!

Again, an Abrams tank autocross would be pretty awesome, and I'm pretty sure Isis hasn't developed any armor plated weaponry that could drive as well as these bad boys! 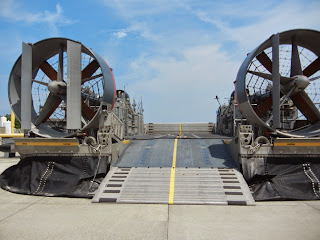 Here's the rear view of the LCAC with the ramp down. Those fans are about 12 feet across, so I'm sure they move a lot of air! 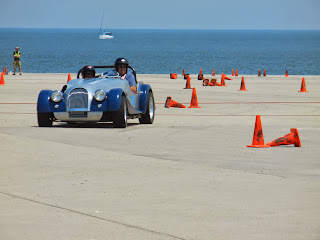 How was your day? My day was pretty good since I got to hang out with car folks all day, drive my car as hard as I could stand it, and then from time to time just enjoy the scenery like this.

During the last run group some clouds finally showed up, a few rain drops fell, and the temperature went down a lot, so that helped cool things off and make for a fun day.
Posted by robert.a.nixon6@gmail.com at 6:25 PM