Last time I shared the 3 unique cars that I'd never heard of until this show, so here's some more of the cars spotted on Sunday. Several cars were from student members of the Merchant Marine Academy Auto Club, so you might be interested to know that in addition to learning math, science, navigating, and other sea-going skills, students at Kings Point also take welding! This comes in real handy for your truly to work on a campus with 1,000 students that are all mechanically inclined, very intelligent, and high achievers. Stop by the auto club workshop and I'll bet you'll find various Mariners working on their cars, trailers, motorcycles, getting a lot of hands-on time with the lift and tools available.

First up, an early 60s Mercury Meteor. Back in the space race days, plenty of cars had cool space-going names like Comet, or mimicked spaceships with their tails and other trim, so the name Meteor fit right in for the few years it was built, 61-63 in the US. This one has original trim inside, which in the 60s usually meant vinyl bench seats front and rear! Normally any shade of brown as a car color does not impress me, but this one works! Super trivia, this car also has the ignition key on the left side of the steering wheel, so that's one thing it has in common with my Porsche Cayman! 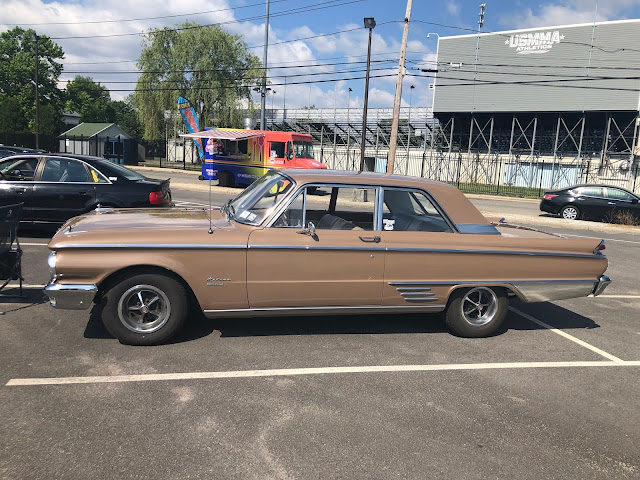 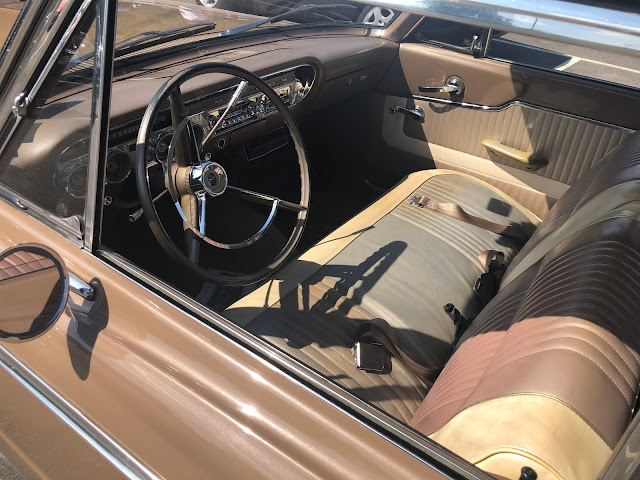 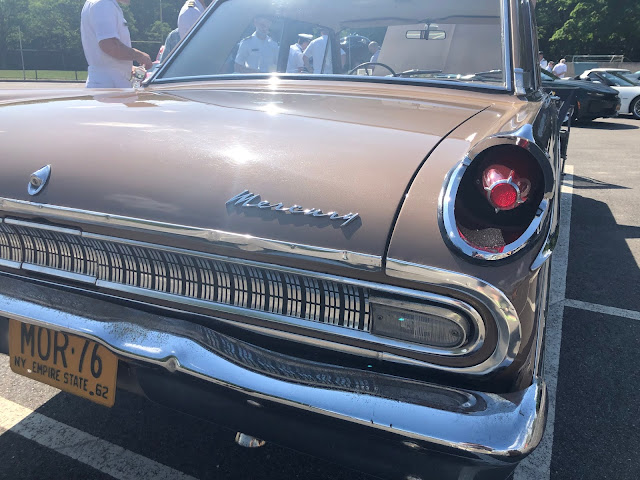 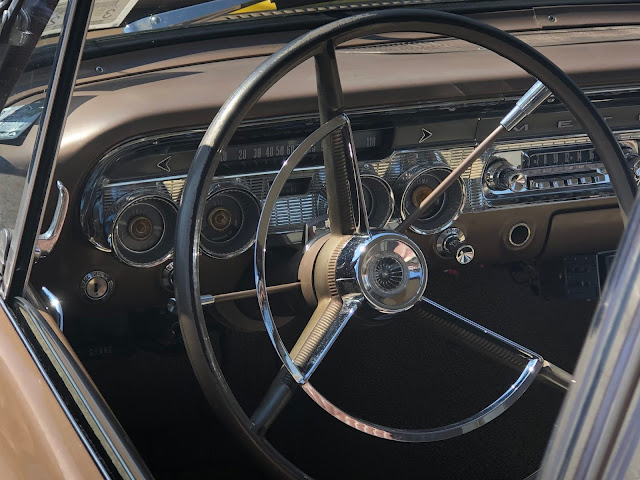 Next up is one of my favorites, not because it's cool or goes fast, but because of the story. This car was basically donated to the club (so the story is told) so the members have been working on it, and hope to have it racing in autocross or rally racing, or something! Circa 1998 Audi A4 6 cylinder quattro (all wheel drive in Audi talk.) The "custom paint" job on the hood, Student Driver plate, Kings Point Auto Club KPA sticker, and other features make this a stand out in a car show of actual cars! Other features include the spray painted bumper that is now attached to the car, courtesy of a few strategically drilled holes, and what certified ASA mechanics refer to as "zip-ties." 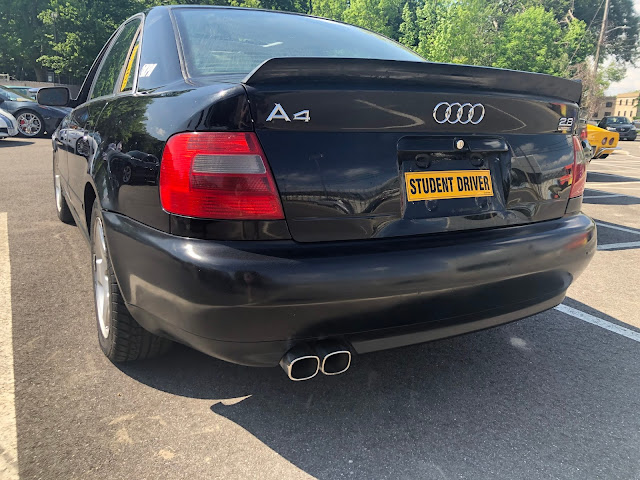 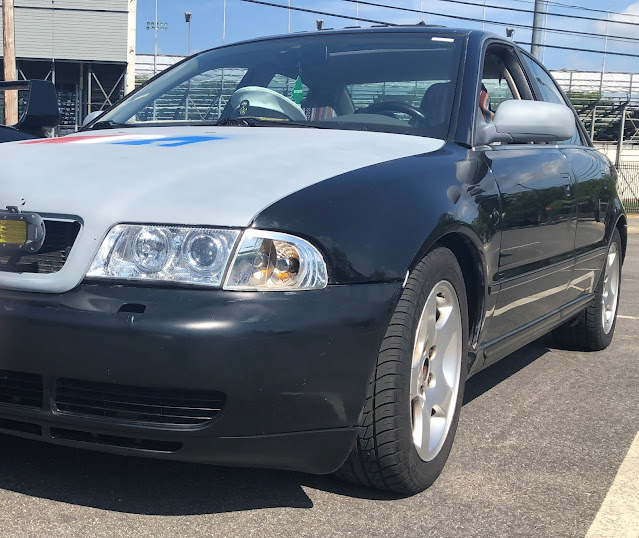 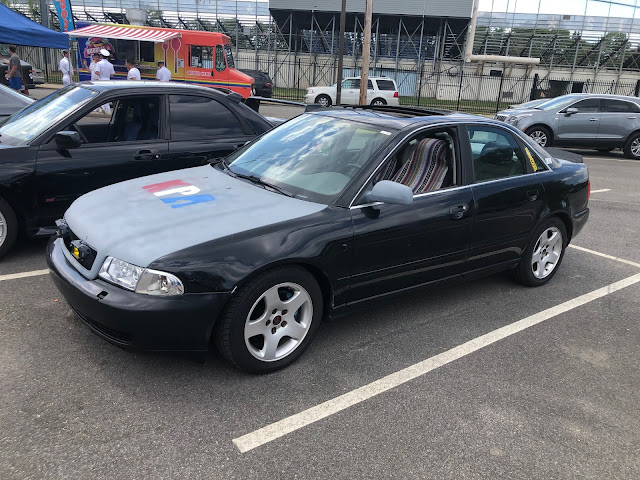 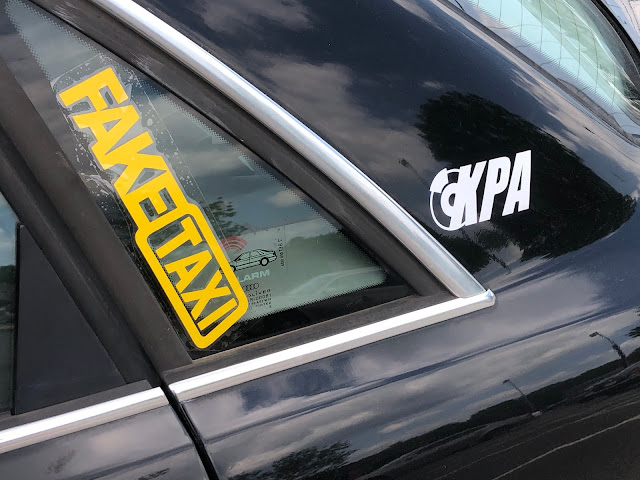 This yellow Corvette and the Honda motorcycle were two more big hits at the show, both owned by different students. The two wheeler has been brought back from salvage title status, so it is encouraging to find younger motoring fans keeping the classics alive. These two vehicles got a lot of attention from the crowd, everyone loves Corvettes and bikes! 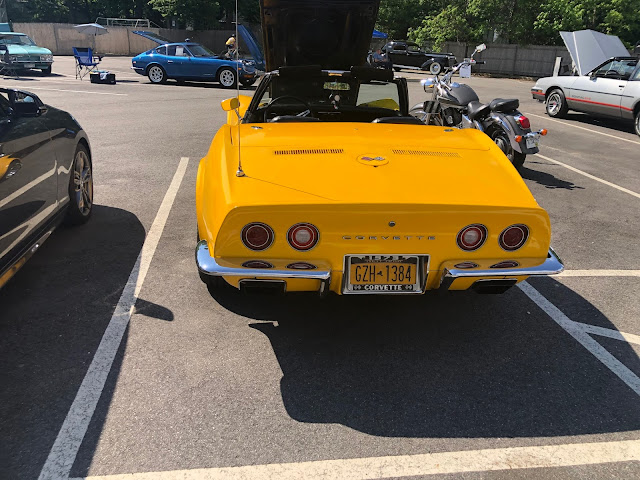 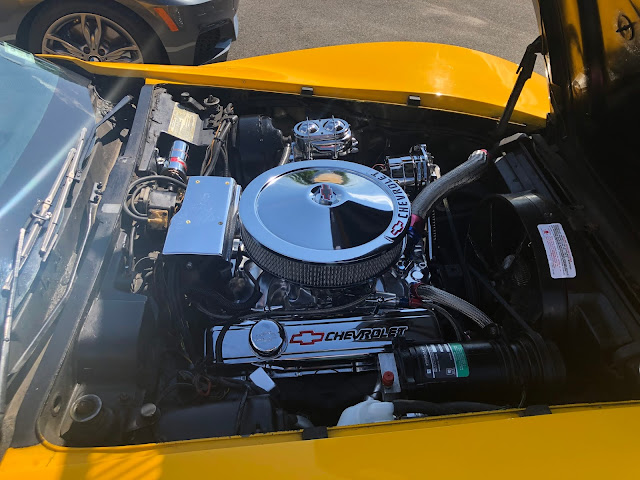 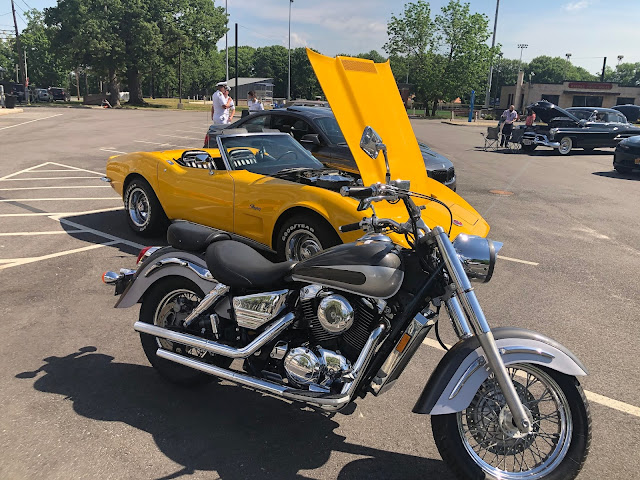 OK, let's hit some more highlights and wrap this thing up. Thanks again to the US Merchant Marine Academy for hosting this show, as well as all the Midshipmen that made it happen, the Kings Point Auto Club members, the Food Truck folks, and the EMT students on duty keeping everyone safe! 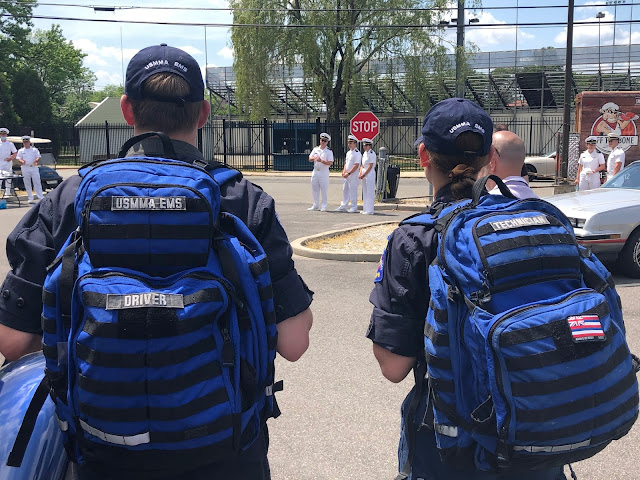 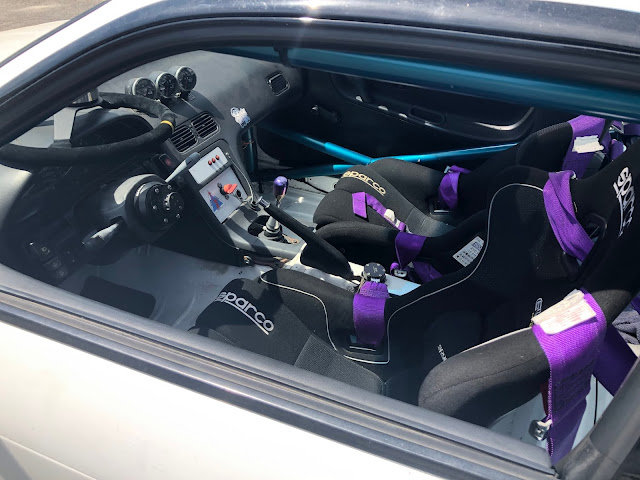 There were two Chevrolet Corvairs parked side by side, of course both rear engine, one hard top and one convertible. I'm no expert on these things, and you can Google Ralph Nader or air-cooled-rear-engined cars to find out more, but let's just say they are a classic design. With model years from 1960-1969, a variety of flat 6 cylinder engines, there's still a pretty good number of them still around. One was a 140 and one was a 110 (numbers tell you the horsepower), so here's a shot of the logos on the rear deck. I noticed that you get two checkered flags with the higher HP car! 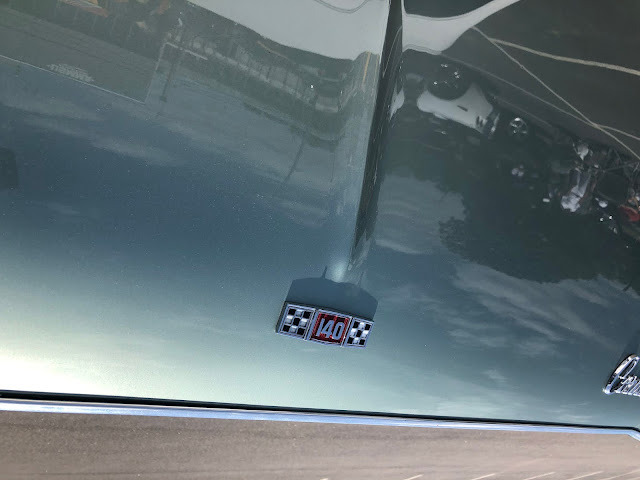 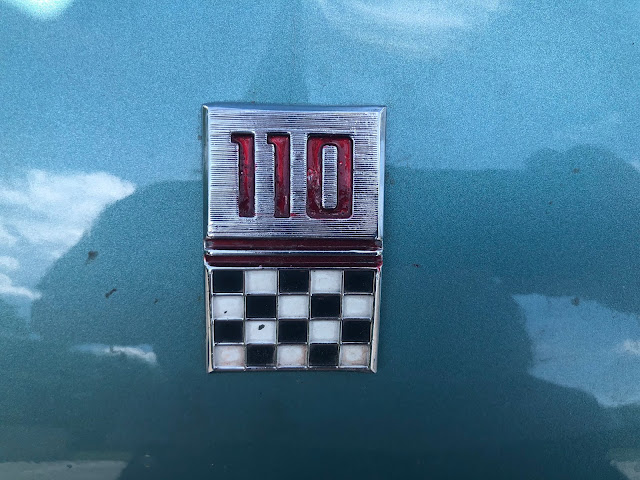 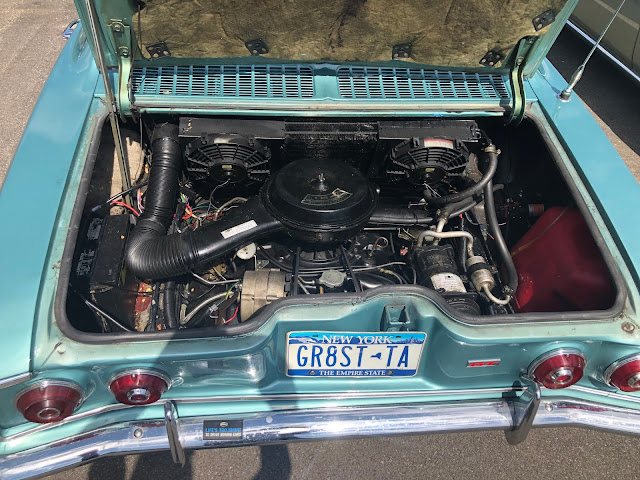 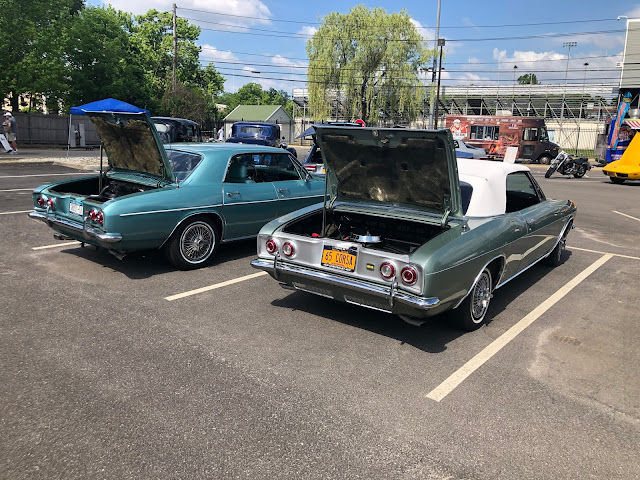 The coolest British car of the show (and ONLY one come to think of it) was this nice green MGB. Complete with rear luggage rack, you can tell it's an earlier model by the chrome bumpers, instead of the later US safety-mandated rubber bumper models. 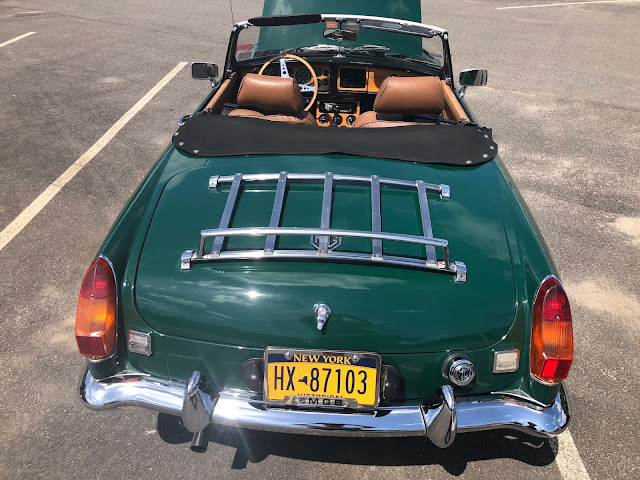 See, I told you I was digging the brownish Mercury Meteor and the rear tail-lights. You'd poke someone's eye out with these today! 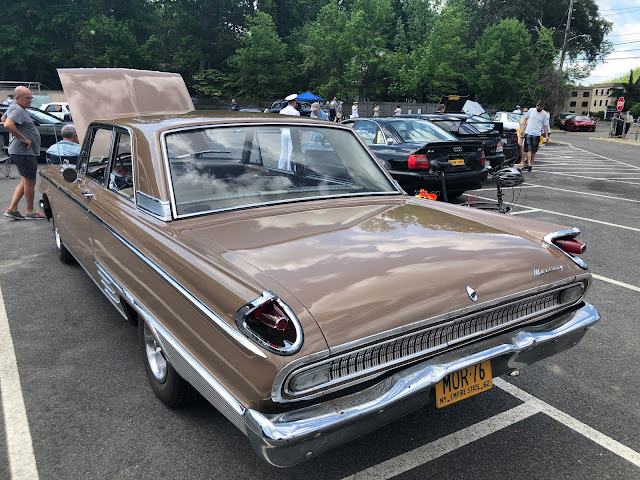 From the 1930s, a blue Plymouth and a Chevrolet. These American Icons were very nice to see, and what a throw-back to the current crop of automobiles. 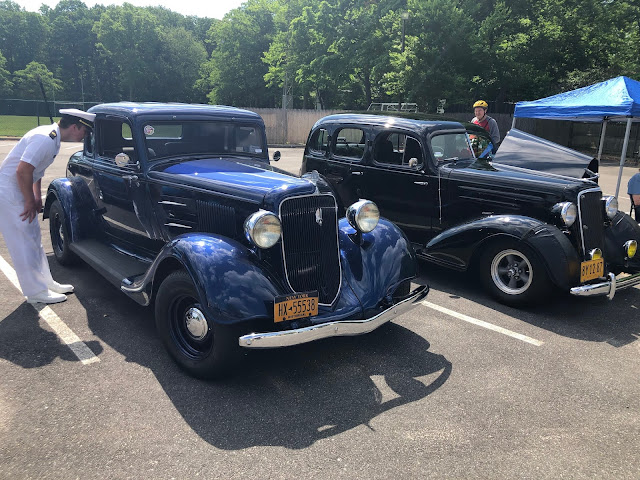 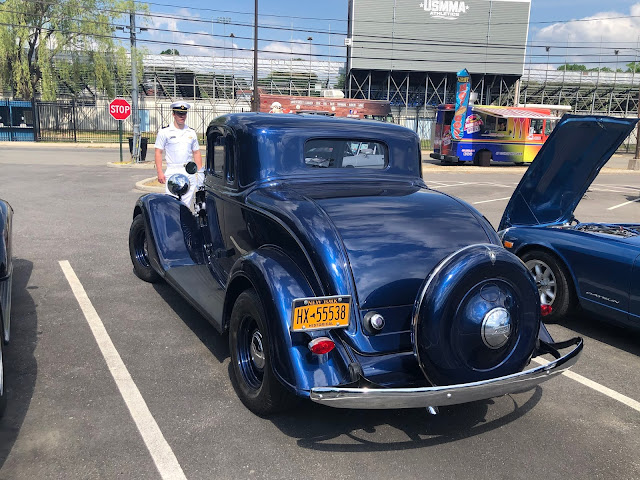 I guess the term "Auto" show includes anything automotive, so sure enough there was this former Army truck. This was a big hit with a few kids that climbed in and checked it out too. Checking my files, I'm afraid my Army basic training military drivers license from 1985 has expired, so I'll just say "I used to drive one of these!" 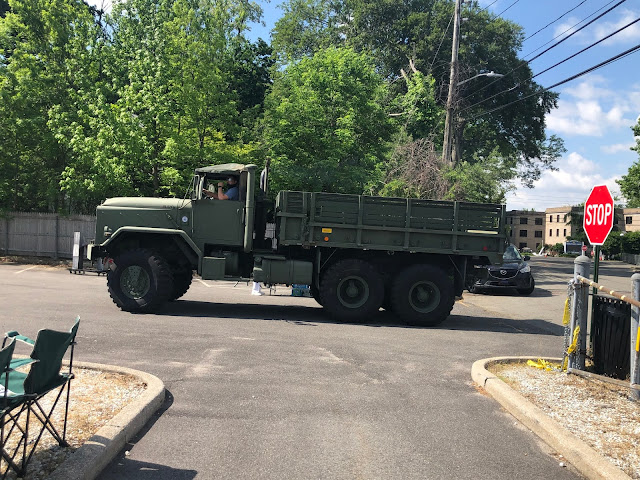 I hope you enjoyed the USMMA Auto Show, and I sure hope we're doing it again 12 months from now. Check out a car show near you!
Posted by robert.a.nixon6@gmail.com at 5:54 PM