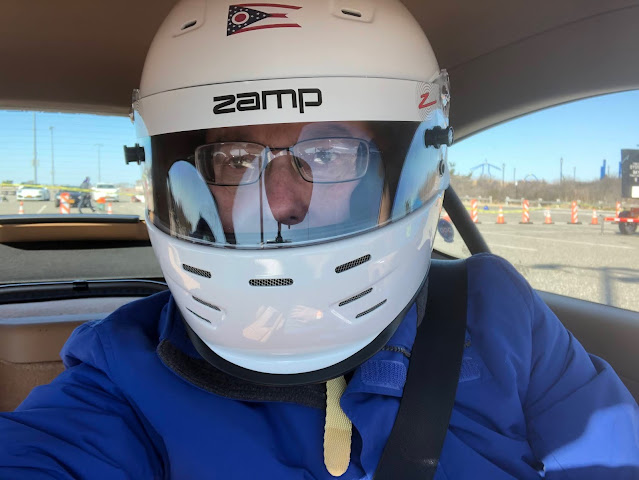 First off, I had fun! Yesterday was a bit on the chilly side down on the south shore of Long Island, but the Porsche Club put on another Autocross and nearly 50 drivers braved the elements to wheel and deal for 10 runs on a VERY twisty cone course. Part of me felt like a pro race driver after the first run, typical stuff the drivers complain about on TV: "Man, I've got NO grip, the tires aren't warmed up, who set up this suspension? We've got to get some heat into these tires."

What makes that funny of course is that I'm NOT a pro driver, and the person that picked out those tires and works on the car is ME, so it's tough to blame the 100 mechanics and engineers on my Formula 1 team on how the car performs. Apparently the NMS-North car's performance yesterday was entirely MY FAULT! Hey, did I mention I had fun though?

Seriously, there are some talented drivers in the club, and they somehow were way faster than me, so while it would be fun to blame the 42-47 degree weather we were driving in yesterday, somehow it was 80 and sunny when everyone else did their driving! Here's the best I could do, good for 9th PAX out of the Porsche cars, 2nd out of 3 in my class, and still fun!

From the video above, you can tell it just felt slow, point to point, instead of fast and flowing. At the previous event, my app told me I hit 61mph, but on this tighter course, 42 seemed to be my top speed. That's not good or bad, and it's always fun to go as fast as possible, so that is what makes autocross so challenging. It's different every time, and there is always room for improvement....in my case, there's always room for a LOT of improvement!

Here's a quick look at some more cool cars that were competing yesterday: