Where's Your Car From?


Without going into politics or talking about trade tariffs, my guess is that most Americans know where their car was made, but may not know where all of it was built. We've seen Civics built in England, Fords built in Canada, with one of the most international cars being the NMS FIAT, which was designed in Italy, assembled in Mexico, and has it's motor built in Detroit. We're kind of more interested in world peace, delicious chili, and cheap fast cars for all instead of wanting to debate politics, so let's make this simple. Do you know where most cars sold in the US are built?

Let's make it a multiple choice question, since everyone likes taking tests right?

WHERE DO MOST CARS SOLD IN THE US COME FROM?
A) Japan
B) Korea
C) Germany
D) Canada
E) Mexico
F) USA 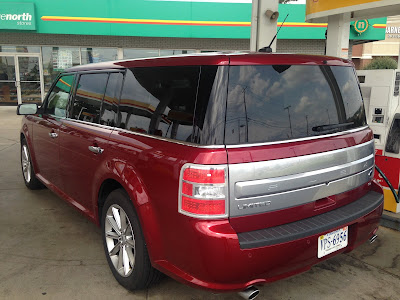 A) If you picked Japan because the Toyota Camry is the number one selling car in the US, then you're wrong twice, because the Camry is built in Kentucky, and cars imported from Japan are only 7% of all cars sold in the US. JAPAN = 11%

B) Did you pick South Korea because Hyundai and Kia seem to be making great cars and they've been sold here since the 1980s? Not a terrible guess, but wrong. Shoot, we'll even include North Korea, since I'm pretty sure they don't build any cars there. KOREA = 4%

C) OK, you might have picked Germany because of all those BMWs, Audis, Mercedes, and Volkswagens that we see all over the place. Again, this is not correct, thanks for playing our game! GERMANY = 4%

E) Let's go south of the border to another NAFTA country and guess Mexico. Hey, they make great tequila, guitars, and other products there, with several brands built around Mexico City. Sorry, but again a pretty good guess, with Mexico right up there with Japan and Canada! MEXICO = 11%

F) Letter F would be the correct answer, with over half the cars sold in the US being built in the US.

If you're interested in more car related information like this, we suggest you check out CAR, the Center for Automotive Research at their web page: CAR

Here's the 2017 numbers from the Center for Automotive Research: 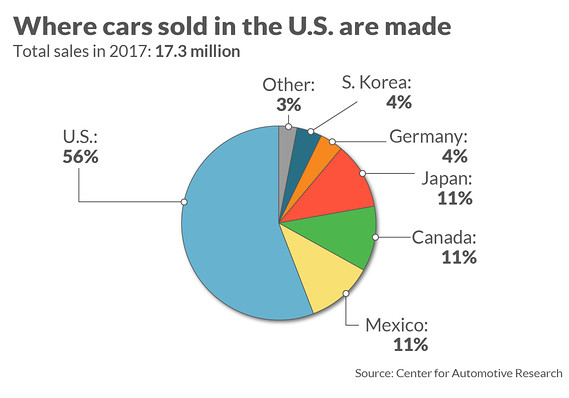