After showing you a bunch of Ferraris and McLarens in part one, let's look around the rest of last Sunday's show in Glen Cove New York. All these show cars paid to display their rides, and the money went to help fight diabetes. We enjoyed walking around and checking out the cars, had lunch at a local restaurant, and then cruised around the cars again.

TIP OF THE DAY: Click on the photos to see them MUCH BIGGER on your computer!

If you really want to read a cool car review, check out what Jerry Seinfeld had to say about this model in 2004. One of his funny lines is that he's glad that German-dubbed episodes of his TV show Seinfeld bombed in Germany so that the Porsche engineers would have more time to develop more cars like this! Seinfeld Carrera Review


This odd looking Camry-like-thing rolled by, and then I noticed it was named "Aristo" on the back. Hmm, never heard of that. Then I noticed it was right hand drive, so that told me it was a JDM car. Then I remembered that JDM stands for Japanese Domestic Market, sold in Japan and not the US. After 25 years you can legally import foreign cars that weren't sold here, so that explains seeing this Toyota Aristo in the US. It was also sold in Japan as a Lexus branded car too.

Stuff you don't see every day continued...some guy made his own version of Chitty Chitty Bang Bang. If that doesn't ring any bells with you, it's the name of a Disney movie from the 60s or 70s with a magical flying car. This isn't a movie review blog, so go watch the movie on your own with some youngsters! Check out this short clip of the movie with Dick Van Dyke and you can get the theme song stuck in your head! 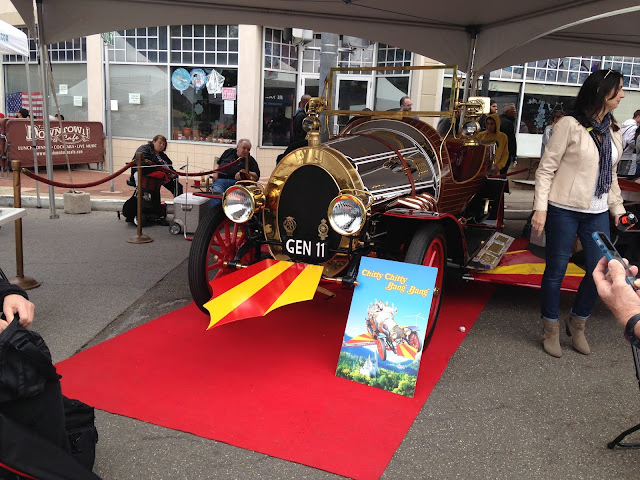 Maybe you don't see one of these everyday, but the Ford Ranchero is a unique car/truck hybrid. This one looked to be in great shape too! That head on shot of the grill with 4 headlights is something you won't find on any new cars today. While the Ranchero was built from 57-79 (and even longer in Argentina!), the 390 GT models like this one date from 1968-1969, you can see the badging and the hood scoop unique to this version!


Funny license plates crack me up, here we go!


Enough with the license plates, let's travel around the world and check out some more cool cars!


I almost didn't realize that this next one was an OLD cop car that was a part of the show, it's a 1986 Dodge Diplomat police car.


OK, let's wrap this up with one last car I'd never seen before. This is some kind of tiny tiny Toyota from Japan. It's super tiny, has right hand drive, and had some signs on it that said you could rent it and drive it around town. My FIAT is small, but this thing is TINY! There is an entire class of small cars that are built for the Japanese market, so it's always a surprise to see any of them in the US.

From what I can tell, this is a Toyota Sport 800. Seeing it parked in between two SUVs  gives you an idea of how TINY TINY TINY this car is! The only other tidbit of info I know about this car is that Toyota has a museum in Torrance California that has one or more. Oh, and one other thing, here's a short video of FOUR of these in a car show in Long Beach CA in 2015: CARNICHIWA.COM
You can learn a lot on the Internet!