This annual car show for charity (Proceeds to help fight diabetes) in Glen Cove NY is AWESOME! While some car shows feature certain makes, or oldies, or what have you, this show is HEAVY on the latest high performance cars like from Ferrari, McLaren, Aston Martin, and Lamborghini. Let's just take a look at some of the most awesome cars we spotted. From what I could tell the car dealers themselves were supporting this event, especially Long Island Sports Cars (featuring British makes McLaren and Aston Martin), and Ferrari of Long Island.   LongIslandSportsCars     FerrariLongIsland

For what it's worth, both Ferrari and McLaren are big in the Formula 1 business, so wouldn't it be cool to own one of their road cars? Even Aston Martin is sort of in the F1 business, since they are a sponsor of the Red Bull racing team, and are considering building an F1 engine in the future.

First up, a car I'd never seen in person before, "LaFerrari." It's still an odd name, but from the huge air intakes up front to the wild rear view mirrors, you can tell this thing is built for SPEED! Ferrari built 500 of them, and of course they all sold instantly. Today I found a few for sale on line, let's just say they are all higher than $3,000,000 each. If that's not fancy enough for you, Ferrari also made a topless version, LaFerrari Aperta, and you could probably find one for 7-10 million. Dollars. Maybe. On the positive side, you get SEVEN YEARS OF FREE MAINTENANCE with the purchase of a new Ferrari, so these cars are very affordable!

The McLaren cars are right up there with Ferrari, so here's a few of their fine automobiles! They have a few crazy models like the new Senna that I've never seen live, but like LaFerrari, I think their limited edition is already sold out. Shucks, and here I am sitting around with three million I wanted to spend on one too! Nah, not really, I'm standing. And I still don't have three million dollars! 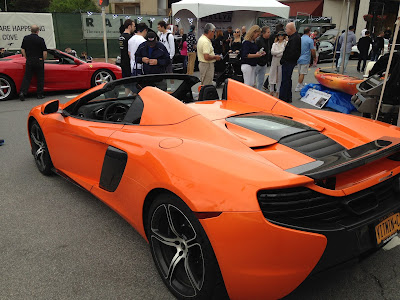 
Other sights around the car show included live music from this band. They played classic rock, and if you believe it or not, included a cello on most of their songs!


Here comes a boat load more of Ferrari goodness, old and new! First up, a Dino GT. Named for Enzo Ferrari's son, these cars continue to look awesome, and increase in value. 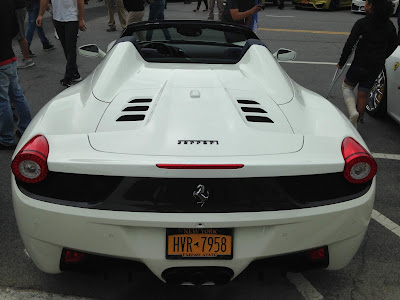 OK sports fans, that's a lot of cars so far, so next time I'll show you even more cool stuff from the rest of the show! There were a ton of Nissan GTRs, some wild vinyl wrapped cars you won't believe, lots of BMWs and Porsches, and a couple of things that I don't know what they are and have to look them up first!
Posted by robert.a.nixon6@gmail.com at 1:59 PM