Yes, we kid about this all the time, but this time I'm serious! Really, driving in Formula 1! I entered an official Formula 1 race and competed in China last weekend. Guess what, I didn't have any jet-lag at all either!

Well, it's not the Formula 1 where you drive REAL cars, because this is the Formula 1 eSports on-line racing! This racing series started last year, and as you might guess all the best drivers were about 18 years old, from all around the world, and they certainly can drive circles around me on a video game! So, the other day I registered on line, and then last weekend I was racing as Valterri Bottas using the official Formula 1 racing game from Codemasters. This company has sold the official PC/XBox/Nintendo F1 game for many years, so lucky for me I already knew how to play.

This first racing qualifying round recreates last year's China Grand Prix, and with only six laps to go you have to pilot Bottas' Mercedes from 6th place up to at least 3rd place to finish on the podium. From the thousands of gamers around the world that will do that easily, the next round of competition will narrow it down to the top 3 in each of the formats.  For me that's on the PC version of the game.
For the fastest racers, they will eventually be flying off to some of the real F1 races for the final round of competition, complete with steering wheels and gas/brake pedals all hooked into the computer as they race head to head.

In my first try at the race, I banged into Kimi Raikkonen and struggled to stay on track with a badly damaged front wing, so that attempt was a failure! Luckily on line, you just push a button or two and you get to try again! After that I played it safe and managed to move up to finish the race in 2nd place, after passing Vettel's Ferrari on the last lap! Sorry Mr. 4 Time World Champion, I beat you!

Now you're probably wondering how far up the leader board I am so far! Well, at the end of this qualifying round, I'm clean up to 1,373rd place! That's not QUITE into the top 3, but at least I'm ahead of some other drivers, since there are a total of 2,183 drivers that set times!

Not so great maybe, but I like to look at the positive side and say that somehow I finished ahead of 810 teenagers! 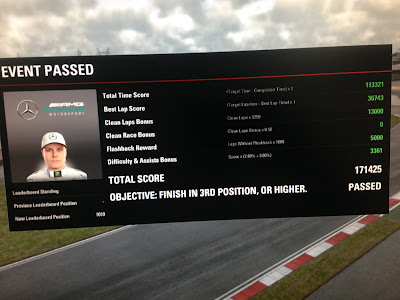