There are unconfirmed reports from somewhere that rhymes with "South Carolina" that the infamous Team Coronautski/Lemons racing team has just acquired a 90s Ford Probe, with intentions of actually racing the vehicle in Rallycross. These spy photos (obtained from a pirate in a backstreet alley in Shanghai last night) seem to reveal a faded hunk of junk that doesn't run (since it's on a trailer), as well as a huge gash in the front windshield. Based on these few photos, we'd estimate that the purchase price seems to be approximately one handful of magic beans, obtained from a very large Giant living at the top of an enormous green plant. 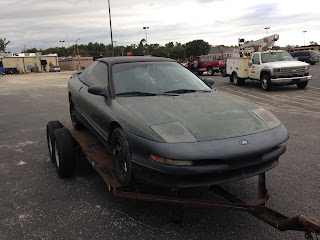 Our sources indicate that Ford intended the V6 five speed Probe to be the "new" Mustang when it was developed, but now many years later this is just an interesting little bit of blue oval trivia. This specific car seems to have what engineers refer to as "wheels", a "motor", and some sort of "interior", but for now we're going to have to wait for more information to confirm or deny that any of the Coronautski or NMS team are actually involved with this Craigslist find. 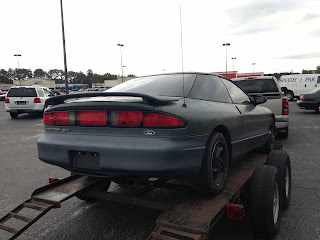