One Week With a Ford Flex


We hope you read the NMS-South review of the BMW X3 rental car the other day. Today, the NMS-North squad looks at the Ford Flex. One of the cool parts of not having a job right now is time to go do more stuff, so that's exactly what we did! Our trip was from Virginia Beach to the middle of Michigan, with lots of highway miles in between. For this expedition, we needed a 7 passenger vehicle to ride on this excursion in style, so we went on line and scouted out the best discounts we could find for a B-flat minivan. 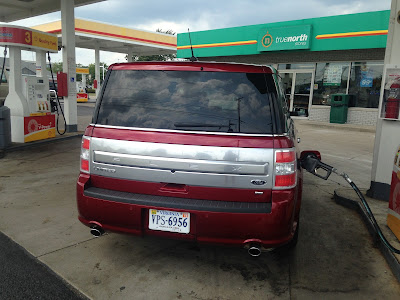 Just like when Brian reserved a Cadillac but ended up with a BMW, we got to the rental counter and they were fresh out of minivans, so we ended up with the 7 passenger Flex. OK, not bad, as long as 7 people can actually get in the thing, then we'll be OK. It did remind of a classic Seinfeld episode where he also has reserved a car, but gets to the agent at the counter and is told that no cars are available. Basically Jerry points out that they are good at "taking" the reservation, but not so good at "holding" the reservation. We agree.

The Flex has a 6 cylinder engine, so it was able to handle interstates, hills, and carrying passengers with no problems. While it didn't have the cool exhaust sounds and backfires of my FIAT, the Flex definitely got the job done, and would be worthy of comparing to a minivan or big SUV if you are shopping for some new wheels.

Like a lot of new cars, the Flex had some cool technology that made the trip a bit easier, so we enjoyed the blind spot warning, back up camera assist guidelines in the video screen, and various other doo-dads like that. Comfort wise, it seemed OK, the front seats were big enough and moderately comfy, with plenty of range of adjustment to fit what you need. Not the most awesome seats I've ever sat in (which would probably be the leather in a new Jaguar), but not the worst


The automatic transmission for the most part was good, just a few times it didn't enjoy downhills with cruise control on, or took too long to shift and get to it's happy spot. The only thing that I still don't understand with this car was that the driver's screen would sometimes dim the brightness level and leave me trying to figure out how to adjust the brightness. This happened more than once, so maybe this car has a unique glitch in it. Along with that, one day the windshield wipers turned on all by themselves, and I'm pretty sure I didn't accidentally hit a button to turn them on. Maybe the Flex has rain-sensing windshield magic, but I don't remember it raining at the time either. Later in the trip we drove in some heavy rain, and I'm happy to report that the rain-sensing wipers automatically adjusted their speed for the rain. That was a great feature to have, so my only question is why there are 4 or 5 settings for intermittent wipers when the blades will automatically change speeds for the rain? Again, like the mysterious video screen brightness settings, there is probably some control panel for this feature that I didn't find, so if you owned the Flex or at least read the manual you could likely figure this stuff out.

So overall we liked the Flex, although it didn't make me want to rush out and buy one because I'm not in the market for a big vehicle. The other odd thing with this car was that the left turn signal didn't turn off after completing the turn. The right signal worked fine, but not the left. Not a big inconvenience, and again I'll give Ford the benefit of the doubt that there was something glitchy about a few things on this one car. Our friends that own a Flex love it.

As far as our experience with Avis in renting goes, they did a good job of taking the reservation on line, and giving us the 7 passenger car we asked for, but I've got to tell you that they didn't clean the inside of it before we picked it up. When I flipped the 2nd row seat up and over to allow access to the 3rd row, I found a treasure trove of Cheerios, McDonald's bags, and that is in addition to the many napkins and a child's flip-flop sandal we'd already discovered. Maybe the person that rented it before was the guy we saw on I-75 that just threw a bunch of trash out of his truck and into the highway as he was driving along. Come on folks, pick up your trash!

As we were heading towards Toledo Ohio and Michigan, we spotted some race car haulers from the NASCAR Truck Series, so if you're cheering for the #4, #33, or the #18, here's a quick glimpse of their semi trucks on the road.