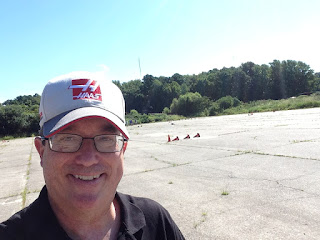 Autocross is a really fun hobby, and if you enjoy driving at all, you'd probably love it too. With the Sports Car Club of America there are events all over the place, so it's easy to get started since all you have to do is show up at one event and you'll be hooked! I'd have to say that autocross is the reason we started this blog in the first place. Here's the NMS-North report for the first event of August, and there will be more to follow before we get to September and pumpkin spice takes over the planet. 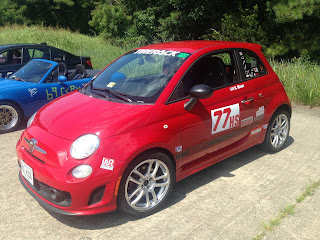 Sunday August 6th was the regular first-Saturday-of-the-month ODR autocross at Pungo, and we hit a great day weather wise with temps only in the 80s, instead of the usual August upper 90s. Not to complain, but if you've ever spent an entire day outside on concrete and asphalt in the heat of summer in places like SC, NC, VA, TX, OK, MO, well, it's H.O.T! 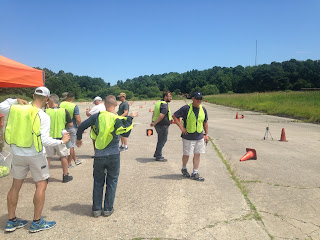 With five runs today, I was able to steadily increase my performance and drop my times, so it was a fun day. OK, to be honest, I did mess up my 2nd run and go off course by missing a gate of cones completely, but other than THAT I lowered my time every time out! After messing around with various tire pressures this year, I've settled on 41 in front and 31 in back for now, and today the car seemed to be rotating/turning in the corners better than ever, so that was fun. After the last run I had one driver tell me that the FIAT was still getting up on 2 wheels, but he said that the 2nd wheel was just barely getting off the ground, so I think it will be OK. Plus, I have some new Koni adjustable shocks to put on next, and I think that will settle the car down and we won't have a big accident and roll over. That would be bad...very bad. 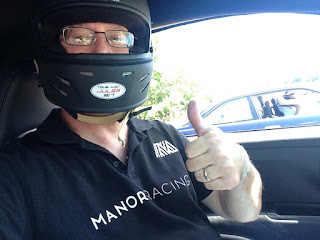 Overall I finished in 19th place on PAX time out of  39 total drivers, so smack dab in the middle. On pure RAW time, the FIAT came home in 31st place. Here's a look at some of the cars that competed at this event:

RUN 1: 43.609  The run felt pretty good, car rotated nicely, but the course was a bit trickier than what I thought after walking it several times. For my next run I knew I could go faster, and would concentrate on smoothing out my corners and weight transfer, looking ahead to better anticipate the next move to make it smoother.

RUN 2: 42:472 DNF  A lot faster, but I missed an entire gate, so this time doesn't count. The mistake on course didn't account for 1.2 seconds faster, so I figured I could easily drop time if I could just stay on course. For run 3 I planned to get on the gas sooner in the long sweepers to gain time. Before the next run I went and watched other drivers on course to make sure I knew where I'd goofed up, so that helped, and one or two other folks made the same mistake I did too.

RUN 3: 43.090  A good half second plus off the first run, but not near the 2nd run, and for some reason the 43.0 made me want to get into the 42 second range. For run 4 I reminded myself to look ahead while on course more than I had been doing, so that I could better anticipate what lay ahead. Getting a 42 should be easy.

RUN 4: 42.892  This was faster, but it felt slower because I was throwing the car around more and it still just doesn't feel right to do that. However, Mario Andretti said something like "If you feel like you're in control then you're not going fast enough." That pretty much sums it up for me, even when I go faster it still doesn't feel right, so much for natural driving talent!

RUN 5: 42.461  Ended on my best time, and this was a hair faster than that shortened run 2, so that was a good thing! Coming out of the final sweeping turn I was able to get on the gas a bit sooner than before, so that helped a little, plus driving more aggressively on the rest of the course. For the H Street class, the FIAT once again took 1st place, with no other cars in class! The FIAT once again takes "Fastest Italian Car of the Day", again with no other Italian cars either! However, it was pointed out to me by John Peabody that this also means the FIAT was the "SLOWEST Italian of the Day." Can't argue with that one!