I don't know about you, but I've got a bunch of car magazines around the house, and they just don't read themselves, so here's some highlights from the recent batch of reading material. Not a book report, not a summer reading list, and there is no quiz at the end. 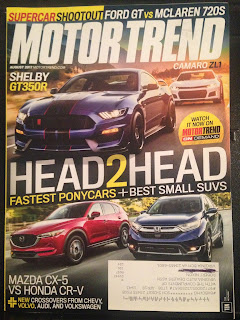 Here's a BREAK THROUGH in automotive journalism, a comparison of a Mustang and a Camaro. Hmm, why hasn't anyone else thought of this before? This time, it's a pair of over $50,000 V8 powered versions of Detroit's finest pony cars (sorry, nothing personal Dodge). The Ford Mustang is a Shelby GT350R, and the Camaro is the ZL1. Hundreds and hundreds of  horsepower in these cars, and both must be a hoot to drive. The other comparison on the cover is the Mazda CX-5 and the Honda CR-V, battling for supremacy in the hyphenated SUV battles. As tested, these two SUVs were around $34,000, so at least that is more affordable than the super-duper Stang/Camaro options.

Other highlights in Motor Trend included reviews of the new Chevy Equinox, Volvo XC60, four different cool Audis that all seem to cost $55,000, and then a kind of comparison of the McLaren 720S and the new Ford GT. As much as I already complained about so many 55 thousand dollar cars, the McLaren and Ford GT are measured in hundreds of thousands of dollars, so they are purely in the "when I win the lottery" category for us normal people. 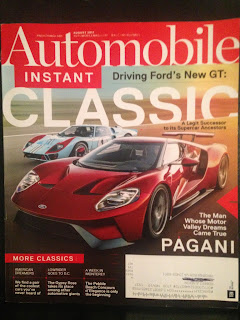 Speaking of the Ford GT at $450,000, it's also on the cover of Automobile! This carbon fiber car has already won at LeMans basically has a cage built into it's body, so if you can afford it you will surely be safe and secure, even if you can ever find enough road (or race track) to take it over 200mph! This month's Automobile gets my pick for best of the month, based on the variety of articles, and I'll even give them credit for slightly increasing the size (width) of the paper it's printed on too!

Other highlights include a story on the Gypsy Rose, the most famous low-rider car from the LA car scene, and a big description of the many car events during Monterey Car Week held every August in California. Two other articles are helped make this issue into my top pick: one was a story about Horacio Pagani and the fabulous cars he builds in Italy, what a cool true story! Finally, a not-super in-depth article on aerodynamics on cars, but to be honest, I'm sure I don't know enough physics and math to understand a real in-depth article on this topic! Do I look like a scientist? 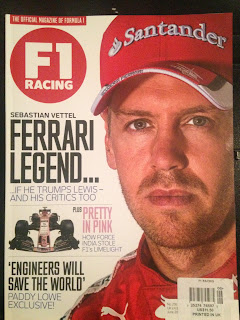 You may not be a Formula 1 fan, but if you are, F1 Racing is made for you. Featuring different drives, teams, history, and cars every month, this one comes all the way from Great Britain, so other than the odd use of "our" language, I look forward to this one every month. Current leader of the F1 drivers championship Sebastian Vettel is on the cover, so Go Ferrari! 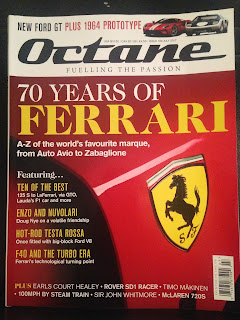 Speaking of Ferrari again, here they are on the cover of Octane, which gives us some tidbits from A to Z that cover the 70 years of Ferrari. On the negative side, it's also from Europe, so these magazines cost a bit more than the latest issue of People magazine, but I can't imagine there's a lot of automotive information in that type of publication! Guess what? Just like two other magazines this month, Octane also includes a story on the new Ford GT! It's still incredible, fast, awesome, and still ridiculously expensive. 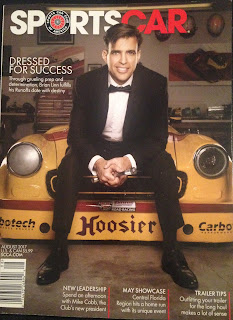 SportsCar is the magazine of the Sports Car Club of America, so let me just give the SCCA a plug and encourage you to hit their website SCCA to learn more about the club, and even join. The magazine may not interest you until you are a member, and as far as I know it's not sold on news stands anyway! 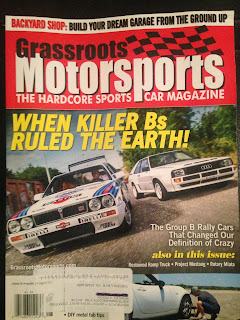 Grassroots Motorsports  is always good for some fun articles, and it always comes across as being written by real enthusiasts that are out driving and fixing cars all the time. As proof of that, this (and every other) issue has articles on a few on-going projects that the magazine staff are working on right now. A few of them include: building your own garage, tuning a recent Mustang for better performance, refurbishing an old ramp style tow truck, and converting a Miata to a rotary engine! That's a lot of territory, so whether or not those particular projects interest you, they at least  are inspiring to read what normal folks are doing to their cars in real life.