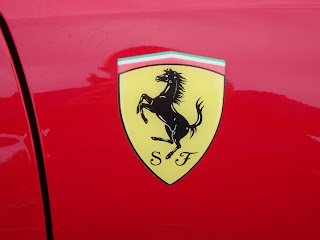 If you are a Formula 1 fan, I know you're pumped up for Sunday's race in Hungary. If you are a Ferrari fan, you are doubly pumped up because the red team from Italy will start first and second on the grid, after Vettel set a new track record to take pole position, with Kimi 2nd.

On row 2, using the Noah's Ark "Two-by-Two" method, we have both Mercedes cars, led by Bottas and then Hamilton. The long run down to the first corner (since F1 starts from a standstill, unlike NASCAR and Indy) should be VERY interesting, and whoever survives or gets there first "should" be able to win the race.

As an added attraction to the Possible Mayhem Menu, we now have the two drivers from Finland starting close to each other, so watch for any possible Scandinavian Connection (get it, connection, like if they hit each other?) between Bottas and Raikkonen.

Row three, both Red Bull drivers, led by Verstappen, then Ricciardo. This was a bit of a surprise after Ricciardo was fastest of all in both Friday practices, but then before qualifying RIC had a break down on track, so maybe they haven't tweaked his car back to 100% yet. Look for him to be driving hard to take advantage of all mistakes ahead of him in the race. Young Max Verstappen has out qualified his team mate, so look for him to also be aggressive attacking Mercedes and possibly Ferrari from the start.

Row four ends up being both McLaren drivers, thanks to a penalty that drops Hulkenberg out of their way, so congrats to McLaren-Honda for finally getting some good performance out of the car. Here's hoping the have a great race, both score points, and avoid the issues that have plagued them the last few years.

Our American team Haas drivers start 14-15, pretty unexciting so far this week, so I'm afraid they will need some cars ahead to DNF if they are going to get up in the top ten and score some points.

One final driver note, Williams driver Felipe Massa drove in the three practice sessions, but then had to pull out for qualifying and the race due to illness, so best wishes to him. The same wishes for his replacement, Williams back up driver Paul Di Resta, who even though had never been in this year's car on track, should be able to do a good job since he's got several years of F1 racing in his past.

The race starts just past 8am Eastern, with an hour long pre-race show at 7am, all on NBC Sports Network.
Posted by robert.a.nixon6@gmail.com at 1:29 PM