Coming up this Labor Day weekend, the NMS Abarth will be heading out to Moyock NC with the Tidewater Sports Car Club for their Fall Track Attack. What is a Fall Track Attack? Does anyone really fall down? Is there a real attack? Is it on a track? Hey, America needs to know! 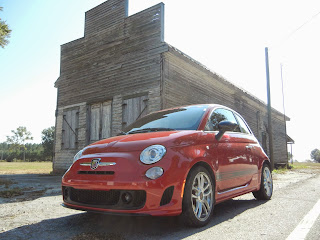 This will not be a regular autocross, and it's not a race on a track, so let's say it's one driver at a time tries to drive a lap of a track as fast as they can. OK, it's not quite a full lap either, but it will have a mix of left and right turns on a mostly level course, so it's not a NASCAR oval! Most of the cars that have entered this event look to have more power than the mighty 160HP of the Abarth, so I'll predict that I will have one of the slowest times, but I'll also predict that I'll have about the most fun driving the course too.

We have about 50 drivers entered, so each driver will get several runs in the morning, and then several more in the afternoon to see who can get the one fastest lap. Right now there is a 100% chance of rain, so this looks like it will be a wet one thanks to the storm heading our way from the south.

Besides this fun event, this weekend will also include the Formula 1 race from Monza in Italy, so all the Italian car fans, Ferrari fans, FIAT fans, etc will be cheering for the Scuderia Ferrari to maybe have a good race at home on Sunday. At least the two Ferrari drivers could try and not crash into each other like last Sunday in Belgium! That would help!

Here in the US we won't be crashing into anyone at the Track Attack.
Posted by robert.a.nixon6@gmail.com at 1:05 PM