If you ever visit Los Angeles, you can skip the Hollywood sign, skip the Dodgers game, forget Malibu and even Disneyland! You need to make the Petersen Automotive Museum your first stop!

It is not the largest auto museum in the world, and it's doesn't have everything, but, (and this is the important part), the cars it has on display are 100% mind-blowingly awesome! In addition to the cars that I saw in a few hours, they have more cars in "the vault" in their underground lair/bunker/parking facility that is another tour all by itself!

Who was Mr. Petersen? Why did he collect cars? How did he afford to start a museum? Why am I asking questions? Mr. Petersen is the guy, the guy that started Hot Rod magazine, and ended up with a publishing company that also brought us Motor Trend and other popular magazines. Later in life, he sold his business for hundreds of millions of dollars, and he and his wife supported a lot of worthy causes. Luckily for us, he also started a foundation that created this museum. You need to go there!

How awesome are these cars? To answer that question, I'm just going to give you the top 10 cars that I saw, and you will hopefully keep in mind that any one of these is a world class famous automobile for one reason or another. From various categories of the exhibits, here's my NMS TOP TEN TERRIFIC PETERSEN CARS: (and please click on the photos for a closer look)

--1981 DMC-12 DeLorean (modified!)  Probably the most recognized car of all time, strictly due to the series of three Back to the Future movies. This car is one of three made for the first film, and it also appeared in the other two follow on movies. It comes complete with flux capacitor, thanks to a restoration after being on display at Universal Studios Hollywood for 25 years. There is a company in Texas that purchased the stock of DeLorean parts, and they'll sell you a "new" one today! There were about 8,583 built in the 1980s. NEW DELOREAN


--1936 Bugatti Type 57SC Atlantic   Probably the most valuable car in the Petersen, this car was just incredible to see in person. In a room full of classic European 1930s million dollar cars, this was a jaw dropper! 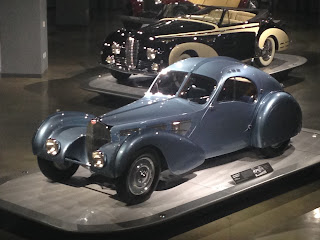 --2017 Ford GT   Here is a brand new car that Ford will be producing soon, and you might have seen one racing at LeMans this year too. The original Ford GT40 (only 40 inches tall) was the car that Ford used to finally win at LeMans back in the 1960s, and they made a small number of road car GTs also. Later, in the early 2000s, Ford brought the GT back for a couple of years and then stopped production again. In 2017 the GT will return in this new form, and Ford estimates they'll build only 250 of them, so I hope you have your (estimated) $400,000 ready to spend! 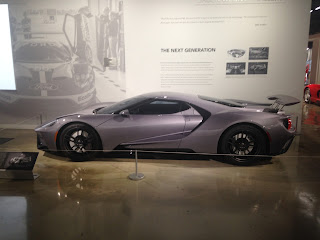 --2011 Ford Fiesta ST (modified)  Perhaps you've heard of driver Ken Block? Maybe you're familiar with the term "hoonigan"? Just  maybe, if you're a car fan, you've seen a video or ten such as Gymkhana 3, which features this car being driven around Paris. Slightly modified to create over 600 horsepower. KEN BLOCK GYMKHANA 3 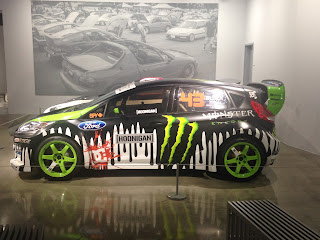 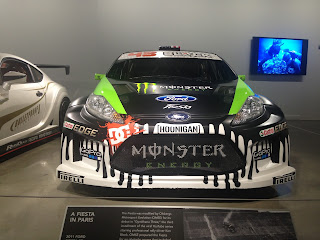 --1970 Dodge Charger R/T stunt car    Featured in the movie Fast and Furious 7, what could be better than an American muscle car in a modern movie that features a bunch of guys driving like maniacs? Of course this car is a "bit" modified, since it had to survive a 10 foot drop in filming and then drive off, which is how they simulated what looks to be cars falling hundreds of feet out of airplanes and then driving off. It's a Charger body on a truck frame underneath. 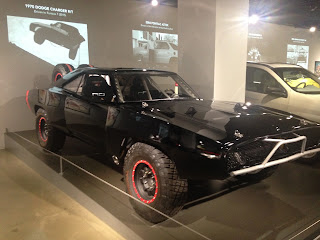 --1957 Ferrari Testarossa  This is one of the original "red heads" (testa=head, rossa=red) from Ferrari. Included at no extra charge is my brother Brad, another red head!


--1954 Mercedes Benz W196  The Mercedes Benz company returned to Formula 1 racing with a vengeance, and this model took Juan Manuel Fangio and Sir Sterling Moss to victory in 9 out of 12 races in 1954 and 1955. In case you are ever asked "Name two Formula 1 drivers that everyone agrees are among the greatest of all time"...just name those two guys and you'll be correct. What a treat to see one of these cars in person! This one is on loan from the Indianapolis Motor Speedway Hall of Fame Museum. 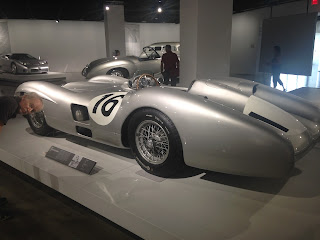 --1956 Jaguar XKSS  A rare cat, Jaguar only built 16 of these, and I hope you can forgive the original owner for taking this one from it's original white body and painting it British Racing Green. The owner was one of those "Hollywood guys" from America you might have heard of, Steve McQueen! 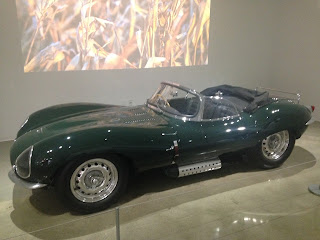 --1954 Plymouth Explorer   With body by design house Ghia, this one of a kind concept car by Plymouth shows some serious Italian flair! Next time your neighbor is out driving their Ford Explorer SUV, feel free to just shake your head at them and tell them they should have tried the Plymouth version! At least ask them if their Explorer came with fitted luggage for the back seat like this one did! 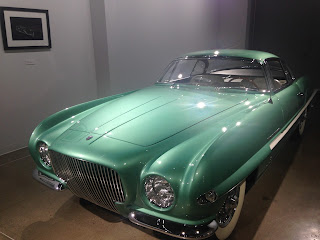 --1948 Cadillac Sedanette: "CadZZilla"    Customized for ZZ Top guitar player Billy Gibbons, this chopped Caddy is just one of his hot rods that he enjoys helping design when he's not on stage with the Little Ol' Band from Texas. Pay no attention to the blogger in the photo and he'll leave you alone. 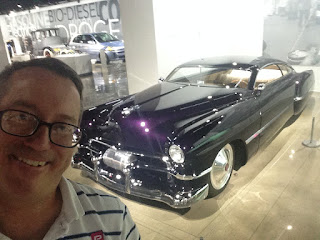