Back in 2013, dad and I somehow talked each other into going to our first autocross. He says he signed up because I did, but I signed up because I thought he did. Either way, we both got to the event and had a blast.  By the end of 2013 we were completely hooked and NMS was born. Around this time, I also learned about SCCA Solo Nationals and the world’s biggest autocross where top competitors duke it out from around the country and I wanted to go.
In 2014 I wanted to improve my driving so I saved enough money to attend the Evolution Performance Driving school and focused on getting as much seat time as I could. In fact, I got so much seat time that by July I realized that the Mazdaspeed Miata was not the right car for me.  I really wanted to be competitive and see how I could stack up against the best in the country and the best in the country were not driving that car.

By September, the turbo Miata was sold and I brought home enough cash to pick up the 99 Miata.  That’s right, almost exactly two years ago I had just swapped a perfectly good Miata with extra power for an older, salvage title, neglected car.  I’m really glad I did.

In 2015 I sank all the money saved on car payments into fixing nearly every part of the car.  It was a huge learning curve but the car was paid for and it was starting to transform from a Craigslist scrap heap that no one wanted into a local class winner. Things were really looking good until mid-year when the engine seized and ended the season prematurely.
An epic rescue mission was launched to bring the car home.  Once home it was a time and money battle to get a working engine built and into the car for the 2016 season.  We missed the opening SCR event but the car returned strong and began taking top PAX and class wins left and right.  It held strong through the Dixie National Tour and Bristol Match Tour and continued to develop.
And now here we are at a major milestone. I’m finally signed up for the 2016 Solo Nationals, two years into the 99 Miata project.  I have a car that is built and dialed-in to compete in an extremely competitive class.   We’ve practiced all season long. Reviewed hours of video. Sampled multiple tire options. Applied lots of sunscreen and drank lots of water.  This trip has been over three years in the making. That leaves two things left to do…
1. Thank you. Thank you to everyone who has put up with this project car, helped turn a wrench, helped out financially, lent tools, provided working space, kicked my ass for three years and always pushed me to be better, or passed on knowledge and advice. There is no way this car project and even my ability to feel remotely competitive driving in autocross would be possible without a ton of support from so many people over the last few years. The trunk lid will be carrying all of the names of people who have directly contributed to the car.  I won’t be able to forget the amount of sweat and long hours that have gone into this project.  I’ve learned a lot in the last few years and it’s hard to look back at my first event, when I was still a little uneasy about doing my own oil changes and realize how far I’ve come. Thank you all.

2. Go kick some ass in Nebraska. 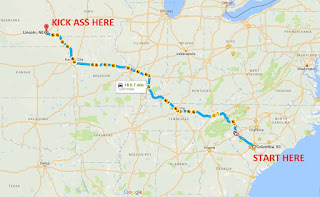