After the Saturday event with the North Carolina Region, our Father's Day double-header will conclude on Sunday the 19th at Little Creek Naval Base in Virginia Beach. This event is sponsored by the Tidewater Sports Car Club, and we'll both agree that the TSCC is a great local car club. For autocross events they follow the same SCCA rules, and are very well organized. We'll be up against a total of 116 drivers that pre-registered, so like usual we're shooting for the top 25%, which (if my math is close) will be the fastest 29 drivers.


At this event, the late breaking news is that Brian is still working on the Miata, so at this time we don't know if he will be driving the Miata in ES or the Ford Fiesta ST in HS class. Competing in his 1999 Miata would put him in the E Street class (sounds like Bruce Springsteen's band!) while Robert will return to his FIAT in G Street (as in "Gee, I hope the FIAT beats the Miata)! The Fiesta would be H Street, and I don't have any funny lines about H Street. This means the NMS drivers will be in different classes, but we'll still be battling to see who is fastest in the NMS Atlantic-Chesapeake Fathers Day Weekend Showdown, commonly referred to as the NACFDWS. You can buy your commemorative NMS NACFDWS T-shirts in our on-line store.

This will be the third Father's Day in a row that we've been driving together, so let's just put in a little reminder here that you still have time to get dear old dad a gift. Or maybe just let  him beat you in autocross for a change!

So far there are no other cars in the GS class with the FIAT, so we're predicting a top ten placing! Over in ES with the Miata, here's the entries listed below. A bunch of Miatas, and Pete and Cooper Frazier in their Toyota MR2. Interesting enough, there have been auto brands named both Cooper and Frazier, but no Nixon brand cars we've heard about. Yet.  We'll predict a top ten in ES for Brian in the Miata also. We're not very good at math, but somehow manage to always get these top ten predictions correct (when there are less than 10 entries anyway)! 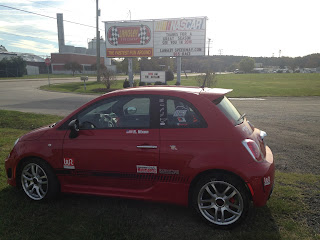 Over in HS the field looks like this so far, Chris Parsons and Dan Adams are very fast drivers, so this would be tough competition:

Now about those T-shirts...

Of course, we don't have an on-line store, and no commemorative NMS NACFDWS T-shirts, so you might as well just go buy some lottery tickets and hope for the best. Friday night's Mega Millions drawing will be over $300,000,000 so what do you have to lose? Or maybe it would be smarter to go buy a three pack of plain white t-shirts and a black marker and make your own NACFDWS wearable shirt. It's up to you! 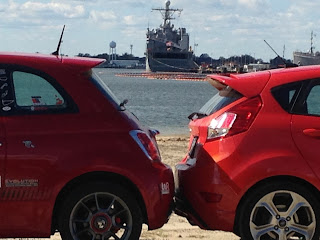 More info on this event, and links to the list of all 116 registered drivers can be found at the TSCC web page: TSCC LINK
Posted by robert.a.nixon6@gmail.com at 3:43 AM