Here at the NMS-North headquarters in Virginia Beach, we enjoy visiting the monthly Cars and Coffee, which is an informal gathering of the motor heads on the first Saturday of every month. Typically there are a lot of folks hanging out talking cars, and walking about and inspecting all the other vehicles on display, and just maybe having that first cup of coffee of the day. This is a free event that goes from 7-9AM and is strictly a social event with no judging, no contests, no prizes, just fellow enthusiasts doing their "car thing" together. If you're a car person, there's probably a similar type of event near you. If not, you could easily start your own. Just do an Internet search for "Cars and Coffee", "Gasoline and Caffeine", or "Car Show" and I bet you'll find something close to home!

Here's a look at some of the cars spotted this weekend, courtesy of our NMS-North Newly Upgraded Digital Image Capture Device, AKA: new Olympus "Tough" camera. 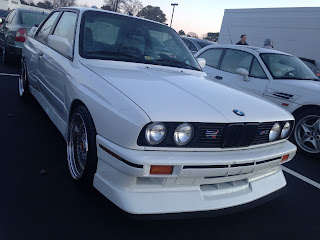 First up, representing Germany, two BMWs in white, M3 on the left.

A few years ago the NMS team got to drive some new BMW 135s at their test track in Greer South Carolina, and we gave them a thumb's up rating!

The company has been around for a while, so they'll likely make it some day! 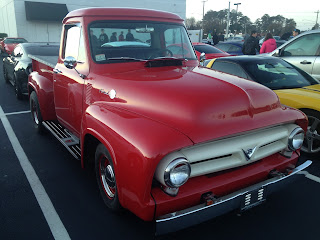 Next, on behalf of the United States of America, the loyal pick up truck!

I don't have the exact numbers, but the many versions of the Ford F150 pick up continue to be the leading seller vehicle in the US.

While they currently aren't making the smaller Ford Ranger pick up, there continues to be talk that it might come back! 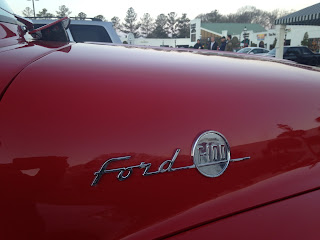 The NMS team is currently truck-less, but our 97 Ford Ranger was pretty much indestructible, and
as far as we know is still on the road today.

We had the smaller engined 4 cylinder, and even though we bought it used and the fuel gauge never worked, it pretty much always got the job done. 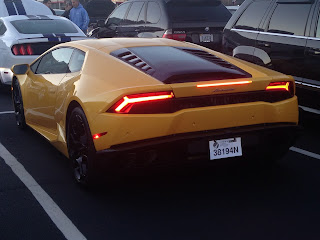 There were a larger than usual number of Italian cars at Cars and Coffee today (meaning "more than 1").

Here is one of two Lamborghinis spotted at C&C. This one must have just found a new owner, judging by the new paper license tag.

I'm sure that if I'm ever faced with the horrible choice of what expensive car to buy after winning the lottery that the Lambo will be on the short list! 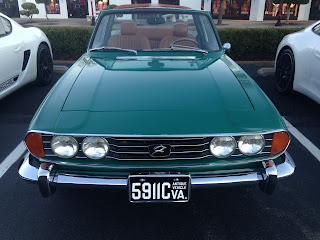 In honor of jolly old England, how about a Triumph Stag?

The TR3, TR4, TR6, TR7, TR8, and Spitfire models are more commonly seen these days, but the Stag always catches my eye.

I like the groovy chrome, four headlights, and one of a kind stag emblem in the grille too. Just don't confuse it with a John Deere logo. 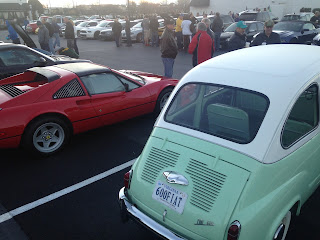 I've seen a lot of Ferraris compared to how many old FIATs are still on the road. The Multipla has seating for six, is rear engine, and certainly would come in 2nd place in a race with the Ferrari!

Hey they're both Italian, mid or rear engine, and not something you see every day! 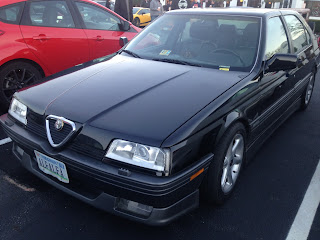 Like it or not, here's another Italian, this one an Alfa Romeo Milano.

With Alfa trying to be serious about returning to the US, I hope to start seeing the Giulia sedans hitting the streets later this year. Their only car here now is the expensive 4C, which is cheap for an all carbon fiber tub, but out of my price range. 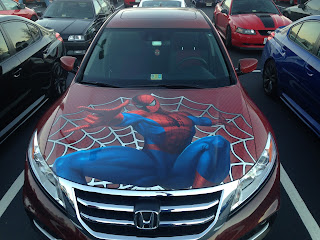 After 2016 we won't be seeing the Honda Accord Crosstour being sold anymore, so if you like it, grab one now.

Other than that, I think the Crosstour is mostly known for being ugly and not selling well. That makes this custom Spider-Man graphic package probably the best looking Crosstour in the world! That's likely going to be my best creative thing to say, it's kind of chilly out here on January 2nd! 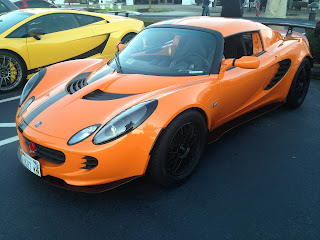 Back across the Atlantic from Virginia Beach we get back to the English Lotus in ORANGE!

Normally you'd think the yellow Lamborghini next to it would be the most ridiculous attention grabbing car in a photo, but next to an ORANGE Lotus, the Italian finishes in 2nd place!

For some reason there is a Colin Chapman signature on the driver's door frame, not sure why since Mr. Chapman (founder of Lotus) passed away some years ago before this one was built. 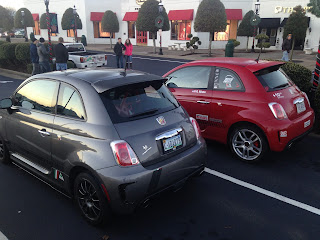 Two more Italians for you, my red FIAT 500 Abarth and another one in gray.

If you want to speak a bit of Italian, instead of gray and red, just say Grigio and Rosso.

Mr. Grigio has some extra badging, while the Rosso is chock full of stickers. Each sticker adds 10 horsepower, so that makes me faster! 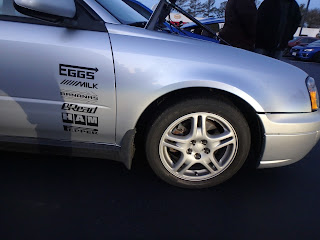 There were a LOT of Subarus at Cars and Coffee, and this Subaru wagon caught my eye for the hilarious stickers. The fonts of these decals are all mimicking some well known auto parts companies, but when you actually read them, it's obviously someone's witty take on the "wagon as grocery getter" list of Eggs, Milk, Bananas, Ham, and Pepper.

Cars folks are known to have a sense of humor, and this one wins! 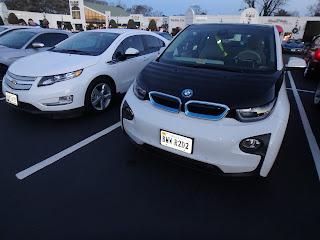 Here's an international combo of American and German electric cars, with a Chevy Volt and a BMW i3.

After test driving both of these models at an event a few years ago, I'd recommend the BMW as the better driver. 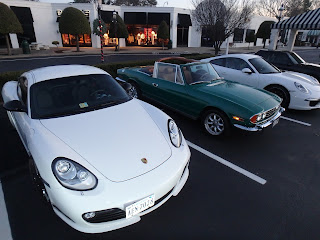 The green Triumph has now been surrounded by two white Porsches.

While the white cars are a few decades newer, much more expensive, and way faster than the Stag, having an old English classic in your garage would be cool.

Maybe I should say, "having an old English classic CAR in your garage would be cool", so you don't think I'm talking about Her Majesty.