While it's nice to finish in first place like I did this morning, I have to be honest and mention that in today's Military Appreciation Autocross in Virginia Beach that there were a total of only four cars in GS class today with the other drivers probably first timers.  But still, first is first!  Mostly, thanks to the Tidewater Sports Car Club for sponsoring such a great event, it was a great way to introduce a bunch of Air Force, Navy, Marine, and two Army guys to autocrossing!  Check out their website to see what else the TSCC is up to: TSSC Autocross

Out of about 30 military members there, Jeremy Garrido and I were the only two Army Soldiers driving, so I'm happy to report that we took 1st and 2nd in GS class, with Jeremy's times very scarily close to mine, so he did a great job at his first autocross!


Also, there was more driving in the afternoon, so until we get the results on line there is a chance that someone drove faster, so we'll see how that turns out.  In the meantime, here's a few highlights on how my drives went:

First run was 36.575 which put me in second place for the GS class, just .676 out of first. Not sure who the other two cars in our class were, maybe a V6 Mustang and a VW GTI.

Run number four and I dropped my time to 34.592 and into first place, almost 2 seconds faster than the earlier run, so that felt really great.  On run five I dropped just a hair to 34.438, so I was getting the feeling that I was just about as fast as I could go, although after every run you get that "I KNOW I could have gone faster" feeling!

Next up, a nearly identical 34.457, and then an even quicker 34.301, so my times were pretty consistent, but it looked like I was stuck in the 34 second range. As a comparison, the fastest time of the morning was at least a 31.5 or faster, so you can tell that even the mighty Abarth with my driving abilities is not setting the world on fire!

Sure enough, the next run was 34.311, just 10 THOUSANDTHS slower than the last run, dang! After that, they announced final runs, so I had one more shot to improve, and it felt pretty good but the timing says 34.376, so another 34.3 and some change. 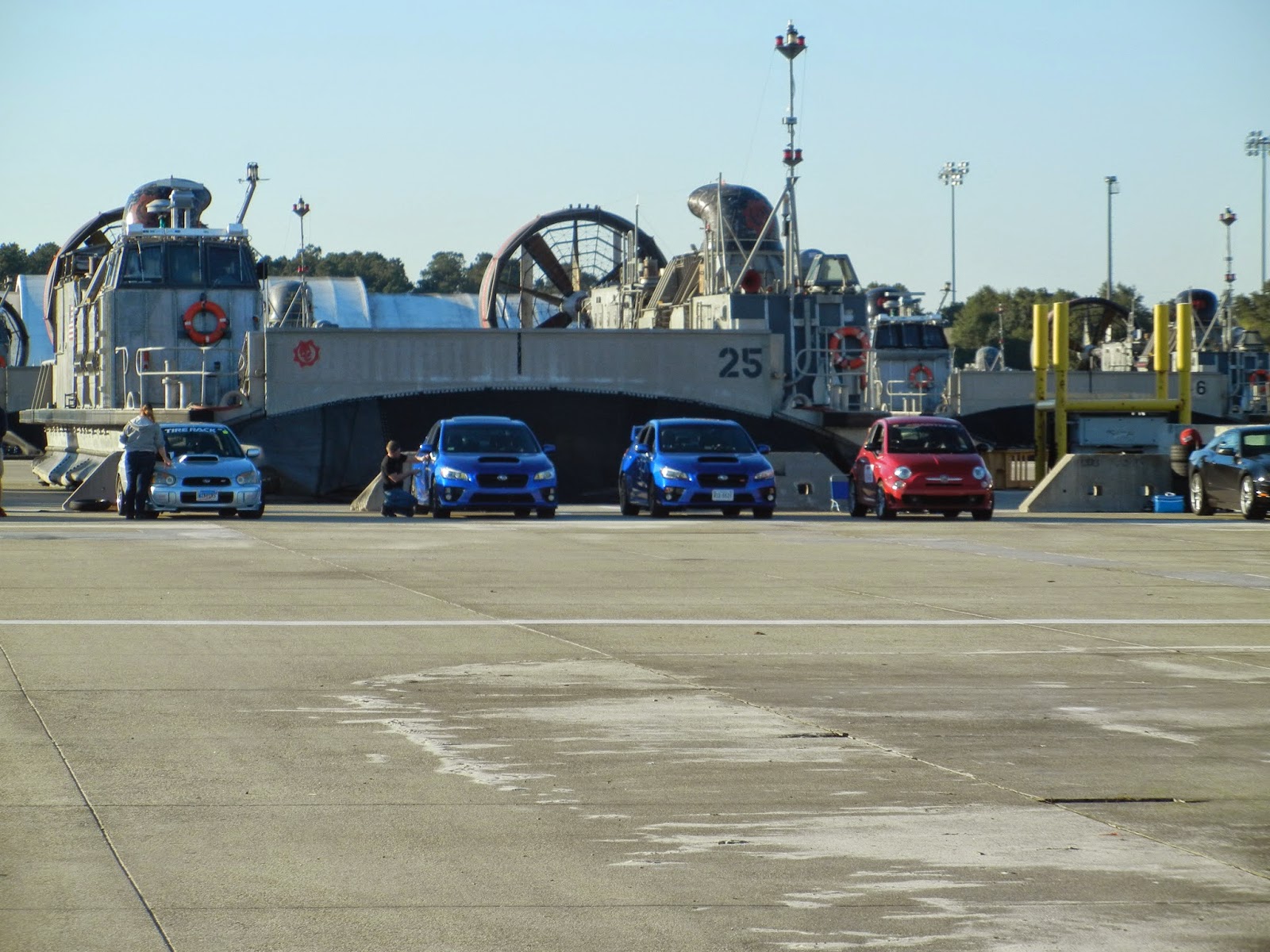 This photo reminds me to mention that the location for this event was very nice, right on the Chesapeake Bay, on a large concrete pad used by the Navy for some of those big air cushioned vehicles you see behind the row of cars above.  Thanks to the Navy for sharing their facility with the TSCC, and again, thanks to the TSCC for giving back to the military in this event today, it was awesome!