With some significant help from friends and fellow Miataphiles, Kyle and Kyle, attention turns to the doors.  When we bought the car we knew the driver side window was in bad shape.  It would barely roll up or down.  The passenger side was better but not great.  We assumed both had not been given any attention for the entire 15 year life of the car. Our assumption was correct... 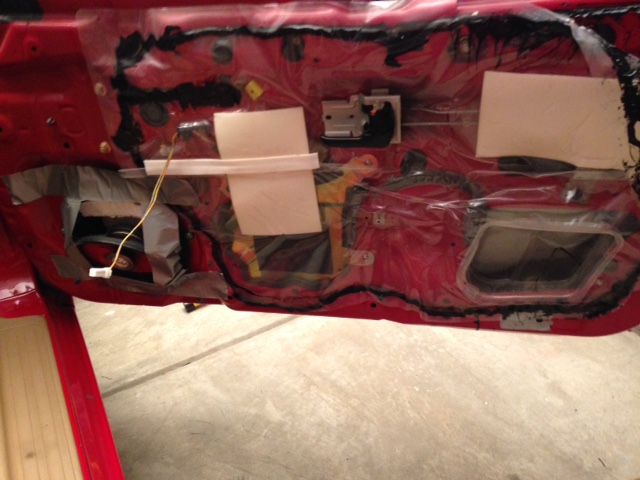 Opening the passenger side door started off as expected, but took a weird turn when we noticed the speaker... 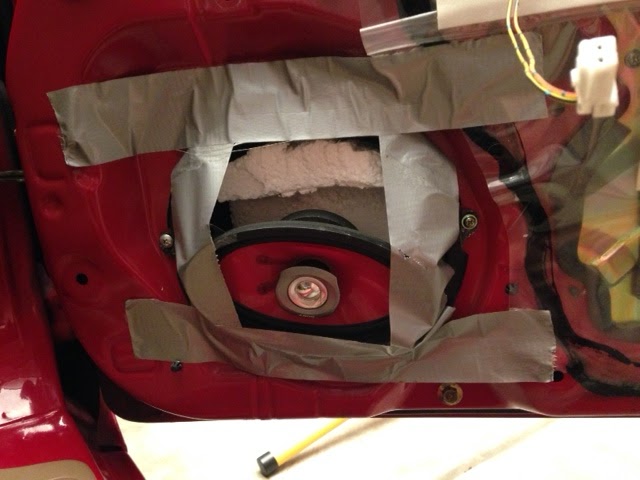 Someone in the car's past had done some "custom" installation work.  This is NOT a factory speaker or OEM duct tape.  It was working but looked pretty horrible.  The 99 is going to be a track day and autocross car, but at least for the foreseeable future, it will be driven to all events.  This means up to 3 hour road trips and I'm not willing to forego a working stereo for those long drives.  We put that part of the project on hold for a day. 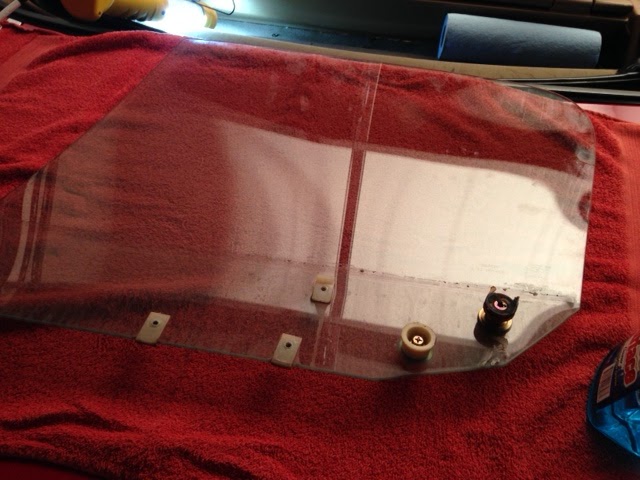 Pulling out the window we were able to clean up that layer of gunk you can see that resides just below the door frame and cleanup and replace the plastic guides that keep the glass going up and down in the metal track. 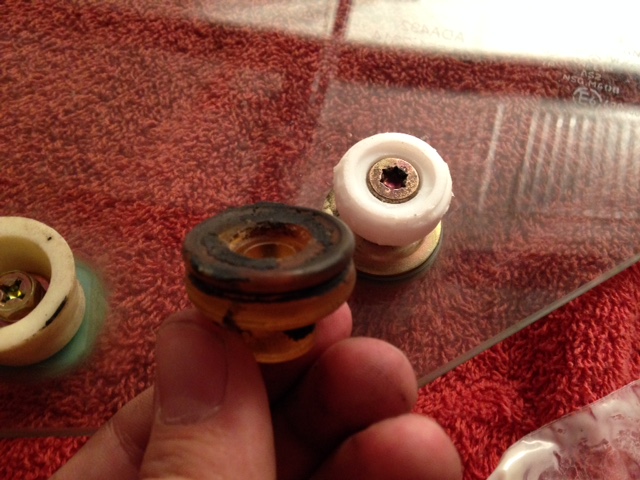 Here's a close up of the old plastic guide in my hand, looking pretty work out and dirty while the new Teflon guide is installed and lubricated on the window.  We moved on to replace the passenger side window into the frame and got it sliding up and down like new and then worked on the driver side.  Remember, this is the side that barely moved at all and needed some muscle strength to assist the electric motors to make anything happen.  It turns out the metal track in the door was bent (still on the unsolved mysteries list), and not even the new, overly-greased guide would go in. 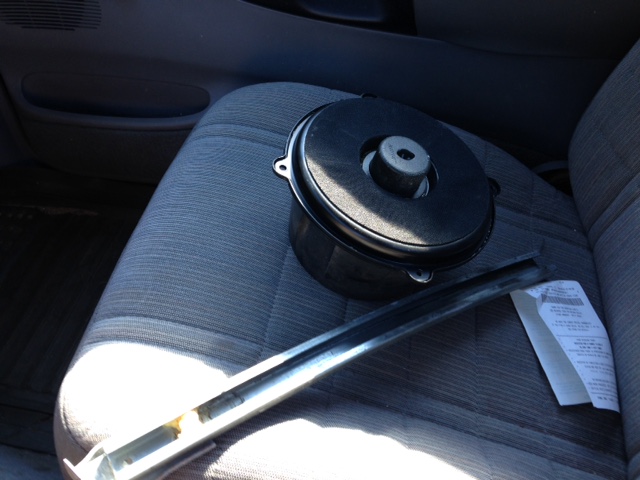 There was only one solution if we were going to get the car put back together for autocross this weekend, and that was a trip to Panic Motorsports in West Columbia.  They were kind enough to step away from the Spec Miata on their dyno and help me pull a working, matching speaker from their parts shelves and salvage a replacement door window rail from another door they had. A few hours later they were hitting the road for another race weekend with a few trailers full of Miata race cars, so it was pretty awesome to get their support for my little project even when they were prepping for some serious track time. 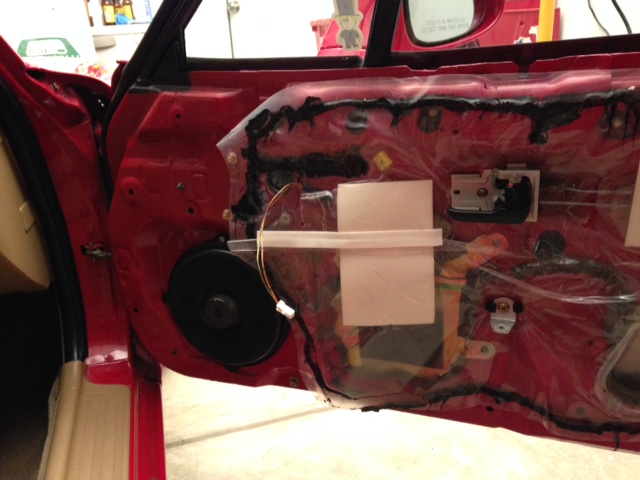 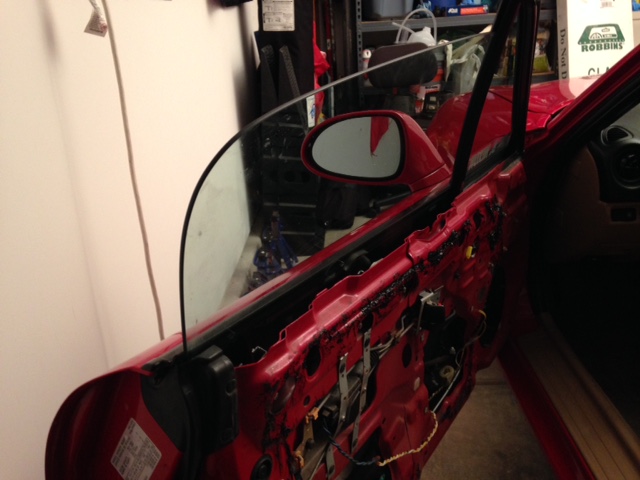 And finally, with the replacement window track installed, the driver side window now rolls up and down better than the passenger side!  Woo hoo!  I can only wonder how many years it's been since these windows have worked properly. 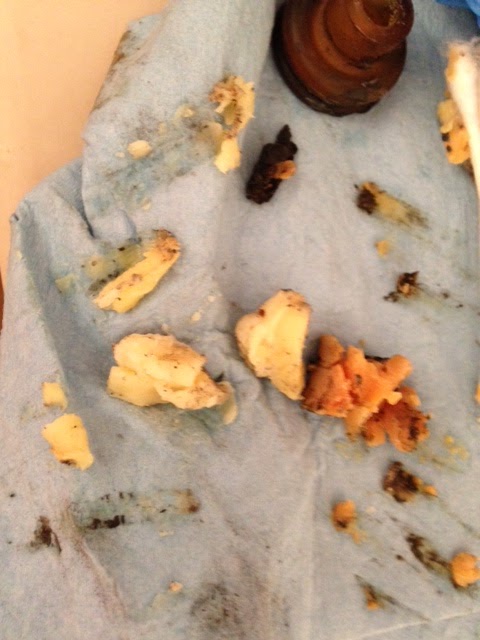 The aftermath of pulling old grease out of the window tracks.  You can see the really dark yellow gunk, which is 15 years old from my car and is mostly solid.  To the left is the stuff from the replacement part I got, which I must guess is newer and is somewhat soft and might allow some sliding.  The brand new stuff that I applied is almost clear. 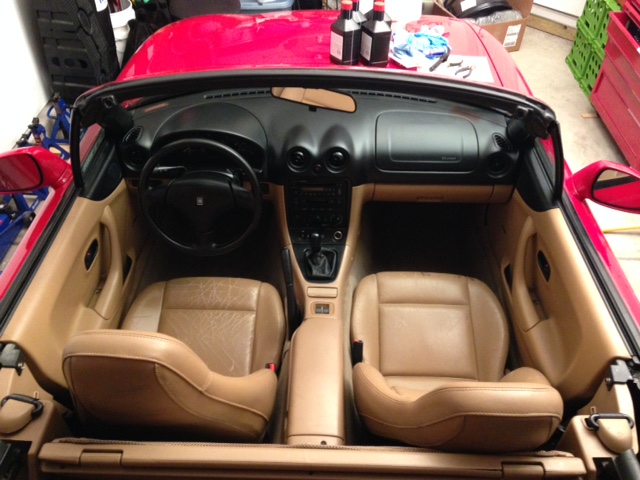 Re-assembly is reverse of dis-assembly.  Everything is now back together and working just about good as new.  The stereo even sounds better!

Between all this work the car made it downtown to Complete Car Care who were able to set the car up with a custom alignment.  They were great to work with and also fellow racers, so if you need car work in the Columbia area, I recommending getting in touch with them.

Coming up Friday, the Kyles and I re-convene to tackle the bleeding the brakes and replacing the rotors and pads.  If we have time we will attempt to flush the transmission fluid and replace all those gnarly looking shifter boots and some other bushings in the shifter assembly.  Getting closer to autocross!
Posted by Brian at 7:22 AM