Yesterday, Jason stopped by and played a major part in several car upgrades and maintenance items on the #86 car. We started with an oil change, getting the car back on full synthetic oil now that it has made it over 1000 miles on the new engine build.

Additionally, we've been struggling with the alignment settings almost since getting the car.  We diagnosed the issue as worn out bolts and washers that hold the alignment settings in place. All eight were swapped in and I'll get the car another appointment to have the settings dialed back in.  Hopefully it'll stick this time!
Moving to the interior, we decided it was time to try out the car without the heavy rollbar adding weight at the top of the car.  While we were in the car, we took the opportunity to swap in some black carpet (in place of tan), and black cloth seats (in place of tan leather).  The tan cloth was a bit dirty and had that hole from when the gas pedal went through it in Virginia Beach last year. Big thanks to Kyle for sourcing all the "new" interior pieces and keeping it in budget. 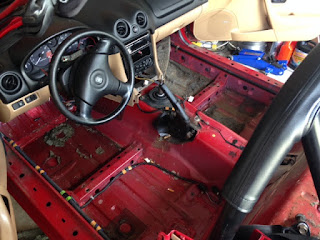 The first step is removing all of the interior and existing carpet.  Despite high hopes, there were no hardwood floors underneath. 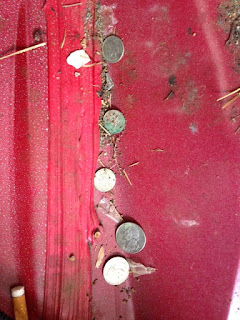 We did make 60 cents and managed to vacuum out more dirt and crud that was under the carpet.  Only a few small rust spots, so we applied some more rust neutralizing paint to help keep it under control. 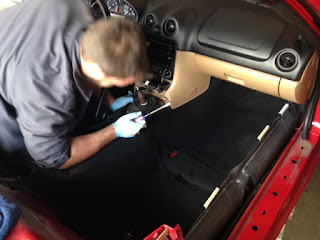 Jason works the carpet under the center console.  The black carpet and seats were pulled from other Miatas a junkyards and somehow we managed to get some pretty good condition and relatively clean pieces. 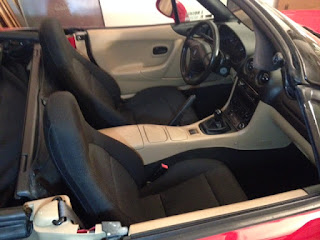 The final result is a much more toned down interior.  Hopefully a little lighter weight with the removal of the rollbar and slightly heavier leather seats. A new black wind blocker was installed just behind the seats.  Previously we couldn't keep the wind blocker in the car because the rollbar interferes with it. The final piece was replacing the center console with a later car's version that features two real cup holders.