Results from the North Carolina Center for Automotive Research!

On Sunday the NMS FIAT Abarth took part in an autocross with the Tidewater Sports Car Club, which was  held at the North Carolina Center for Automotive Research (NCCAR). On a beautiful day in NC, my driving research concluded that I sure hit a LOT of cones! Although on my last of five runs, I did NOT hit any cones. The reason I didn't hit any cones was because I went too fast in one section, lost control of the car, and despite hitting the brakes, slid right off the track and into the grass! No injuries, just a bit of mud on the car, but no super duper fast times either! Come to think of it, I must have hit a bunch of cones on my way to explore the great beyond, but the DNF over-rules the cone count!

Here's the unofficial times for my drives below. Keep in mind that most of our events are on pavement only big enough for a 35-60 second drive time, so this huge driving course of 95 seconds for me was a blast! Besides being bigger and longer, much of it was on the NCCAR test track, so the speeds were higher than most autocross events. I'll say that's one reason I hit so many cones, because I was having too much fun! I mean, because I was going too fast, which is the same thing as having too much fun!

Not sure of the overall standings, so I'll just be happy with having a great day driving fast! That's pretty good!

Third run I was pushing it even faster, well out on the course without hitting any cones, and guess what? Yep, hit a cone and then totally couldn't finish a Chicago box move, and that adds up to a Did Not Finish (DNF) for missing a maneuver. Two more runs to go, and it's REALLY time to not hit any cones in the next run.

Fourth run I was concentrating on not hitting cones but still going fast, while at the same time slowing down for the 3 or 4 Chicago Box elements. Going pretty good, and then BAM right before the finish I hit a cone! With a time of 95.885 plus a two second penalty, that adds up to 97.885, a bit slower than my best run so far. Without hitting the cone I would have improved my time a couple of seconds! Back in the grid to wait for the final run, and I was thinking that I just HAD to get a clean run!

Fifth and final run, and man it was fun! I was hitting a pretty good time, missing cones, and then sure enough, trying to go just a bit faster I lost control of the car out on the track part of the course. As I flew into some cones I knew that it was too late, so I hit the brakes, and still kept sliding helplessly off the pavement and into the grass. No blood, no foul, just a messed up run and no more chances to drive today. After backing up and getting on course I just drove on through the finish line, and figured that maybe next time I'd back of a bit and get a clean run at the next event.


All in all, a blast to drive this course that was part regular twisty-curvy autocross, and part higher speed on a track. The full results should be on line (TSCC website on the right, in our LINKS section), and we'll see how I did overall. As the only GS class car, taking first in class doesn't mean a lot, so if I'm in the top half of all drivers that will be fine with me. 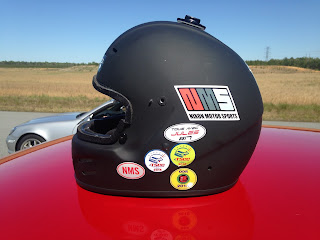 This was the first autocross event at NCCAR for the Tidewater Club, so I hope that we will return there next year. For NMS-North, we'll return to autocross action again in May, and hope you drive safe and have fun too! 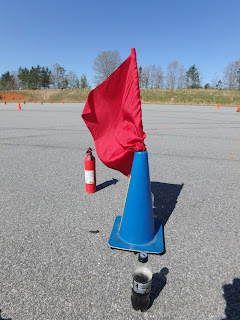