Sometimes a driver just has to read about driving instead of, well, DRIVING, (you know, those times like sleeping or eating), so here' s a look at some of the latest automobile magazines. WARNING: Motoring Magazine Addiction Disease (MMAD) has no cure, so be careful about reading this blog or anything on the Internet, as reading short articles on motoring may be a gateway drug to serial magazine addiction. If you need help, see your medical professional, or just put the magazine down and get behind the wheel! 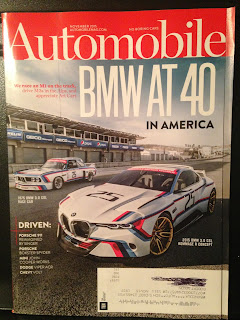 Speaking of BMW, their small museum in Greer SC is a great place to visit and take the factory tour. If you buy a new BMW, you can even take delivery there and do a bit of driving on their test track.

Like many automobile magazines, most of the cars they write about are well beyond the average new car price in the US of $31,000, so sometimes it seems like a never ending parade of $60,000 Mercedes and BMW car reviews that aren't in my price range. 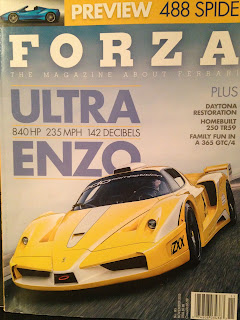 Forza: Cover story on a modified Enzo that makes 840hp and hits 235mph. New car review includes the 488 Spider. If it's about Ferrari, from old to new and racing in F1, then it's in Forza!

Now, if Automobile and Motor Trend focus on cars I can't afford, I expect Forza to talk about cars I can't afford! I mean, honestly, a guy has to do some financial planning on what to do with three hundred million dollars just in case he wins the big lottery!

One feature of the magazine is a regular column with letters from readers asking for expert advice on parts and service on their Ferraris, so there is at least some practical advice in every issue too! 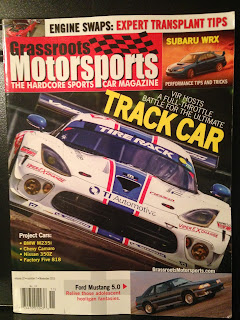 Grassroots Motorsports: Probably my favorite magazine because it focuses (Ford fans should like that word) on many types of motor racing in the US, to include auto-cross. The cover story covers the magazine's annual "Ultimate Track Car" event where dozens of drivers compete to set the fastest single lap at Virginia International Raceway (VIR). Project car articles this month include a BMW 235i, Chevy Camaro, Nissan 350Z, and the magazine's own home-built Factory Five 818. Another feature article covers performance tips on the Subaru WRX. Tons of advertising for every imaginable after-market performance car part available make it a resource for more ideas on spending money, and who doesn't need help spending money! 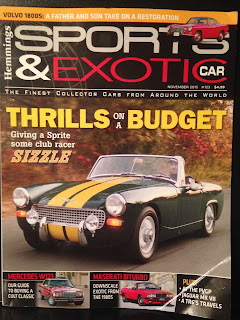 Hemming's Sports and Exotics: The Hemming's folks have several auto themed magazines, and this one covers mostly imports from the past, such as the cover story on a Sprite, and other articles covering the Volvo 1800S, Mercedes W123, and a Mercedes Biturbo just for starters.

Featured on the cover is a 1965 Austin Healey Sprite, which HAS to be the greatest sports car named after a soft drink ever!

Every issue typically includes photos and coverage of major car shows in the US, and an ongoing update on the driving condition of various cars that the magazine staff have in their garages. I can confidently say that in each issue I discover another cool old sports car that I think I need. 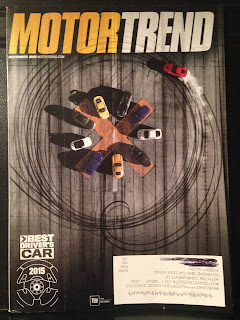 Motor Trend: One of the "big three" of US based magazines (Road and Track, Car and Driver being the other two), this month's cover features their annual "Best Driver's Car" review, and I'll just give you the answer of their top pick; the Mercedes AMG GT S. Geeze, , another great car normal people can't afford! According to the Mercedes AMG website, the GT S starts at $129,900.

I'm really considering taking out a small business loan and starting a magzine or website titled "Cars You Can Afford" or "Cars Under $30,000 For Real People". 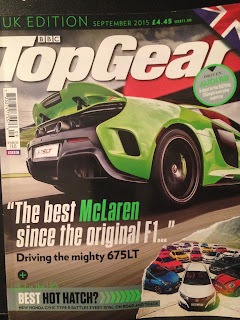 Top Gear: Yes, it comes from Britain and is chock full of odd English words, but that's half the fun! The other half of the fun of this magazine is that every issue has a brief listing of all cars sold in England, so if you're curious what the Renault, Skoda, or other brands we don't get in the US are up to, here it is! Cover story is a sick green McLaren 675LT, but a more practical article is their "What is the UK's Best Hot Hatch" that actually discusses cars that normal people can afford! Hint, the winner rhymes with "Volkswagen Golf R", priced at 30,000 Pounds. If that's a bit expensive (probably $45,000 if you could buy one here), then you'll be happy to know that in their top 3 was the Ford Fiesta ST, at a much cheaper price. For more info on the Fiesta ST in the US, you could ask NMS-South driver Brian Nixon since he drives one!
Posted by robert.a.nixon6@gmail.com at 5:44 PM