After experiencing some odd medical symptoms (dreaming of French cars, delusions of grandeur such as buying used Formula 1 cars, etc.), I visited my doctor this week and after extensive testing  he has diagnosed me with a Code Red (actually Ferrari Red) addiction to car magazines. There is no cure, but with time, sufferers of this malady can lead normal lives. In other words, I'm going to keep blogging about cars and car magazines until I overdose and take up Himalayan goat herding. Since that day hasn't arrived yet, let's look at some magazines on sale now.

Warning: The word "FIAT" will not appear for the rest of this blog, but "Miata" articles will appear in half of these magazines. 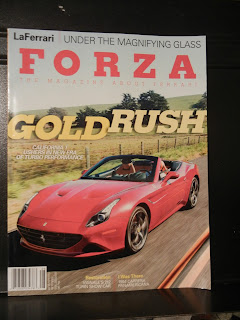 Forza is all Ferrari all the time, cover to cover Italiano, and includes reviews of new cars like the California T on the cover, the LaFerrari, as well as classic old Ferraris, car racing and shows, and the latest Ferrari news from Formula 1 and other race series that include the prancing horse.

While I don't own a Ferrari, I do plan on winning the lottery and rushing out and buying the most expensive new Ferrari I can find, so I consider this magazine my main source of information to be a better consumer in the future when that lucky lottery ticket finds it's way into my wallet! 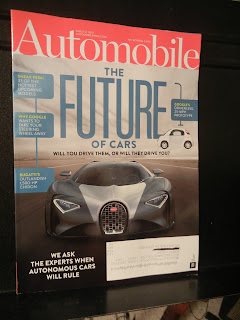 Automobile magazine covers the wide wide world of, well, uh, automobiles, so I guess the cover photo of a Bugatti and a Google driverless car pretty much covers that subject!

And in this corner, the CHALLENGUUHHHH, from THE UNITED STATES OF AMERICAAAAAA, THE GOOOOOOOOOOOOOGLE MOBILE!!!!!!!!!!!!!!!!!!!!!!!!
(stunned silence, no crowd noise, until a chorus of BOOOs rises and kills the driverless car for all time and eternity)

Well, that's what the cover made me think anyway. 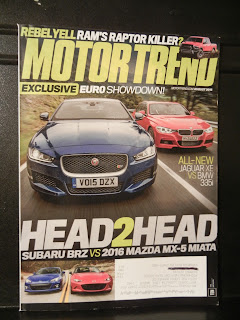 Motor Trend this month as usual features cars on the main cover photo that I can't afford, but considering that it's a new Jaguar XE and a new BMW 335i, at least it's not another Mustang/Camaro or Cadillac/BMW or Corvette/Porsche 911 comparison!

While Motor Trend and all car magazines are a bit predictable in covering what us normal people can't afford, this particular issue has an in depth driving on the track review of the NEW Miata vs. the Subaru BRZ, and NMS is happy to let you know that the Miata comes out ahead in their opinion!

MT also loves the new Honda Pilot, the Ford Explorer, and reviews six different subcompact CUVs, so they've got a bit of everything. 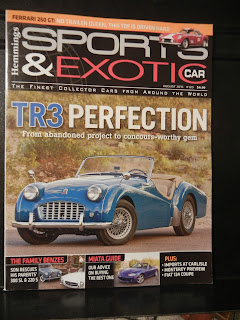 The Hemmings folks publish several magazines, and as a fan of European cars this one always hits the spot for me. This one features the classic Triumph TR3 on the cover, and has a nice write-up of the 2nd generation Miata like Brian's 1999 model.

Also nice to see a surprise in this one with an article on the Renault Fuego, which I always remember my friend Vince drove back there in the 1980s. We used to kid  him for driving the "French car with the Spanish name" since Fuego means "Fire" in Espanol. I don't even remember the last time I've seen one on the road, so maybe there is a reason for that!

Another interesting short article this month tells the story of Mr. J. S. Rasmussen of Denmark. If you've never heard of him, well, neither had I! Now I know that he started his own company in 1904 that eventually turned into the German car company DKW, which at one point bought the Audi company! Later, DKW joined with several others to become Auto Union, and you probably know that Audi still makes cars today.
Posted by robert.a.nixon6@gmail.com at 6:30 PM