On Saturday the 16th of August we visited the town of Blythewood's Electric Vehicle (EV) Day, and got to test drive the Nissan Leaf, BMW i3, and the Chevy Volt.  Just so you know, all three of these cars had a nice driving feel, may be eligible for up to $7,500 in a  federal EV income tax credit,  and can be bought or leased. 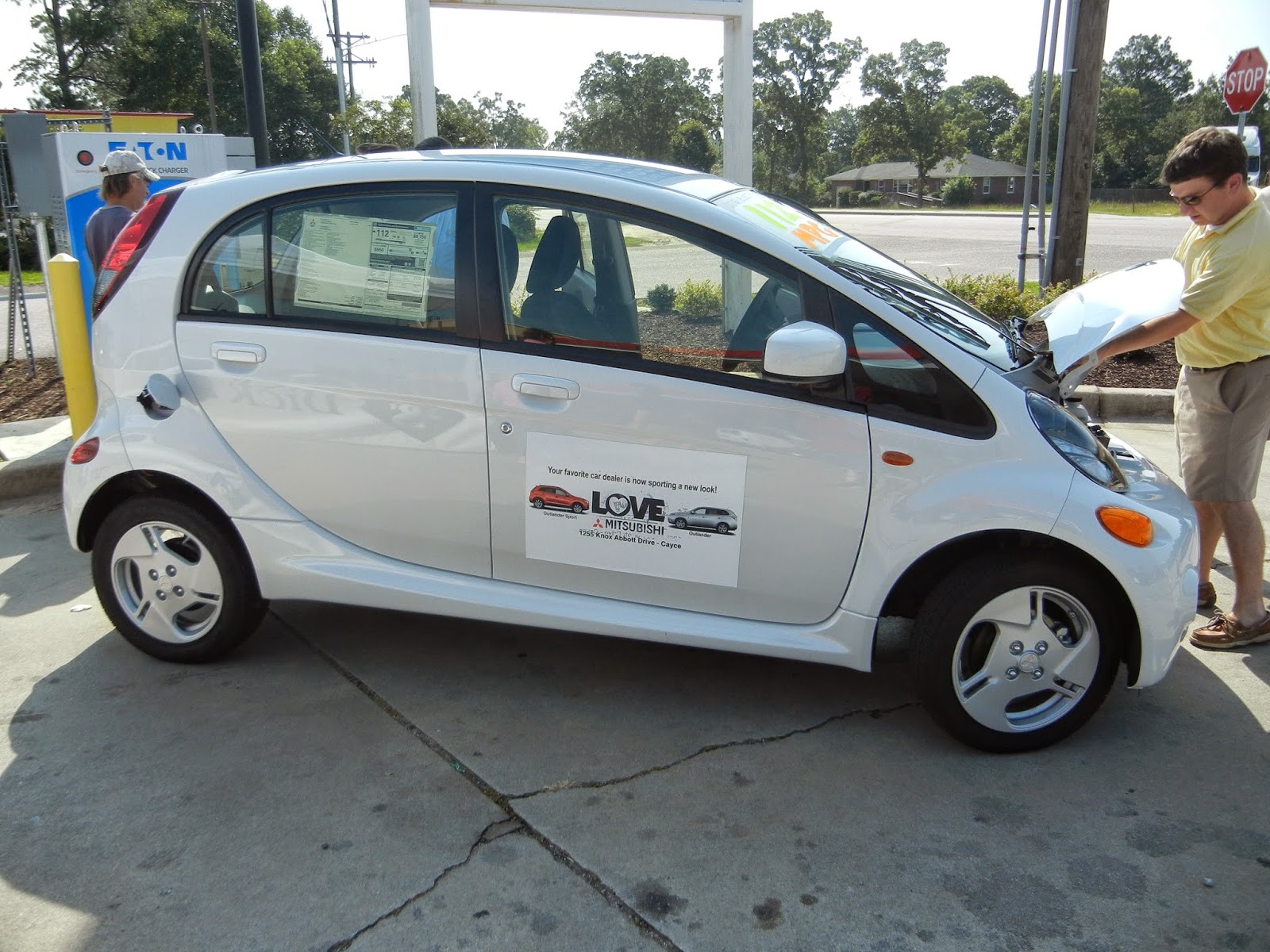 Also available today was the Mitsubishi i-MiEV, but since we didn't drive it we won't say much about it, other than letting these photos speak for themselves. If a picture is worth a thousand words, just think of the time we're saving you by NOT reading about this creature! Here's their website: i-MiEV   which states that this car's list price starts at $22,995. 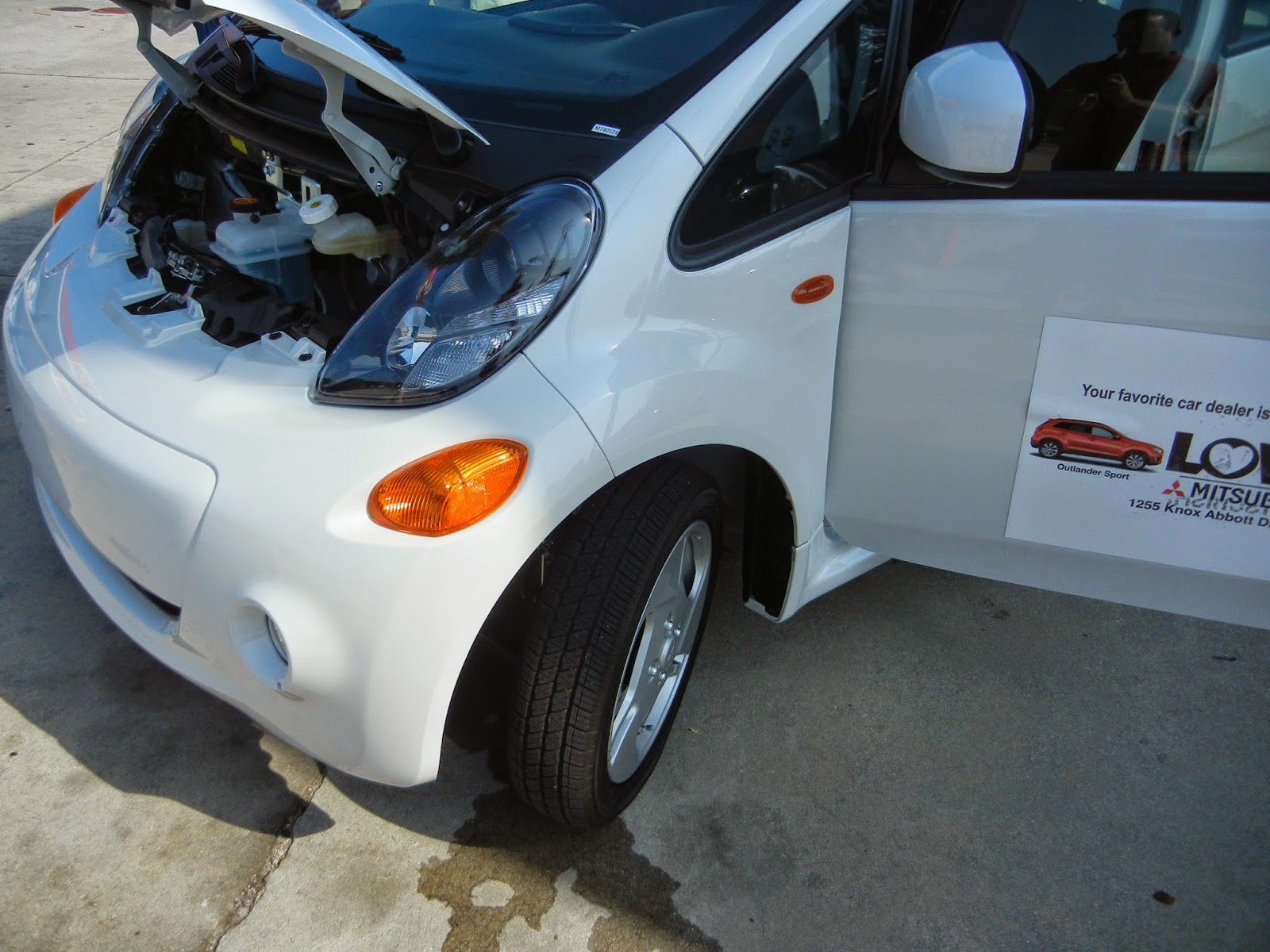 On the right photo I was trying to show the skinny front tire. To state that you can see the tiny amount of space under the hood goes without saying! 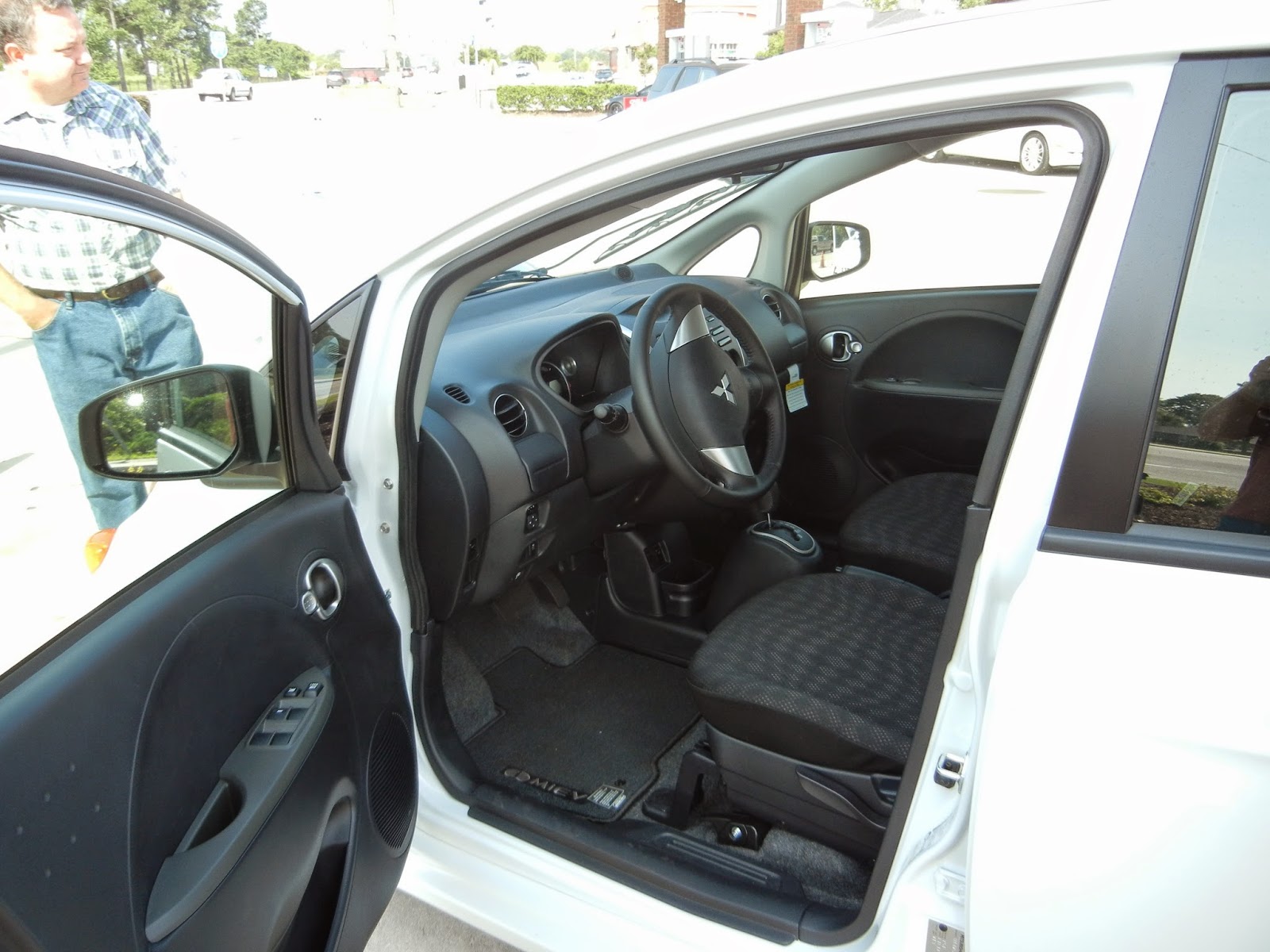 Here's a peek inside the Mitsubishi. From looking at their website ("America's Most Affordable Electric Vehicle") I think they want us to spell it with small letter "i" and capitals for the rest, so "i-MiEV" which must stand for "i-Mitsubishi Electric Vehicle". Do I need to ask if they have a gasoline model named the g-MiGV?

The first car I drove and rode in was the all electric Nissan Leaf. They started advertising the Leaf well before it was on sale, and you might remember the TV ads during the Tour de France with Lance Armstrong talking about it. 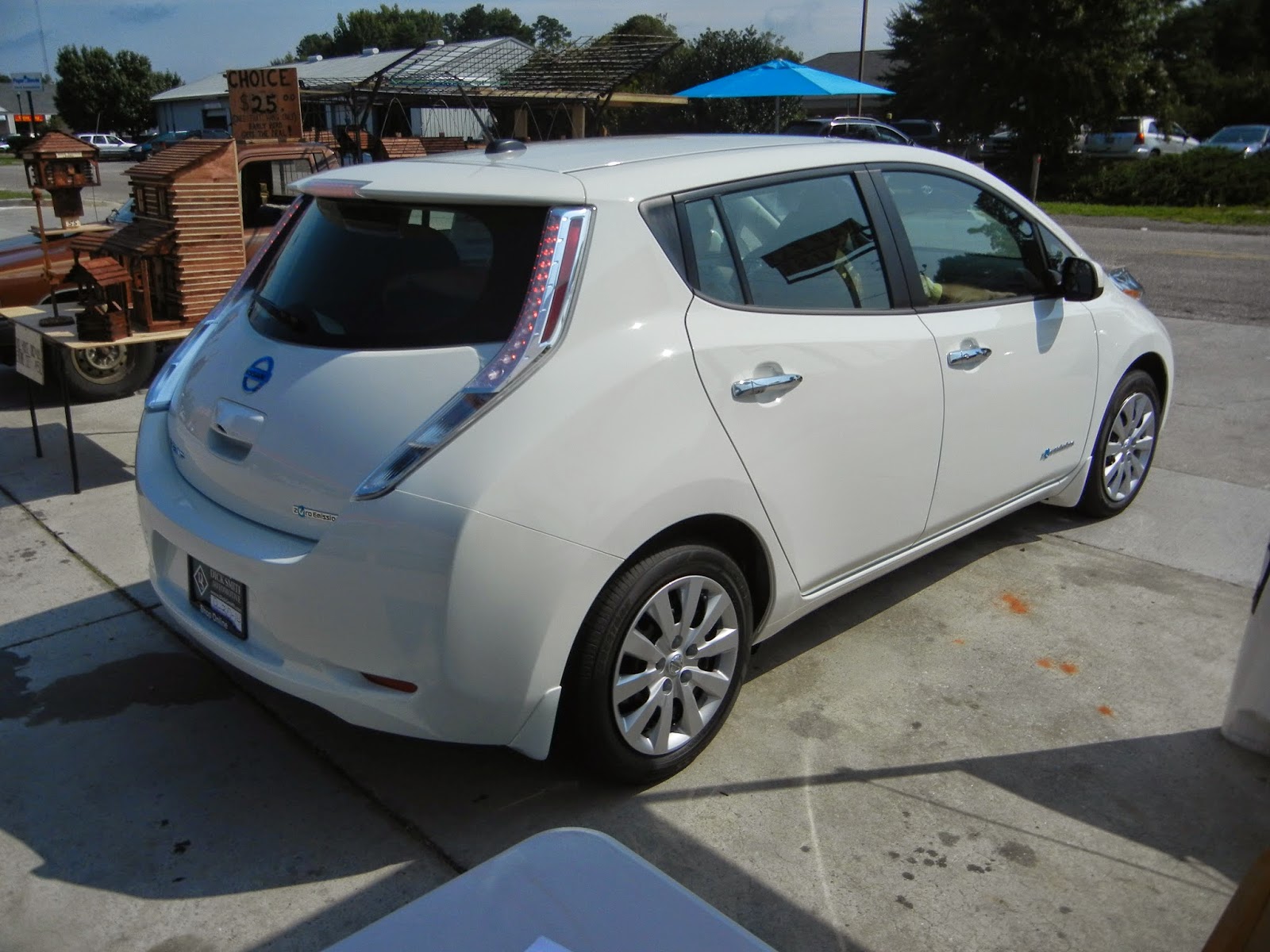 After test driving it, I'd seriously consider buying the Leaf if my commute was not too long, and wanted to save money on gas. It drove easily, and other than mileage range I have no complaints.  Without going into detail on the costs, I think that's the main point of whether or not you might want to buy an EV.  The Leaf, like all the EVs has all of it's torque available when starting to move, so unlike a gas powered car this gives it a fun-to-drive get-up-and GO experience  every time. From the short bit I've driven hybrids like the Toyota Prius and the Ford C-Max, the EVs score big points in this area for driving fun.  Here's the Leaf website: Nissan Leaf  which tells us that  the Leaf starts at $28,980. 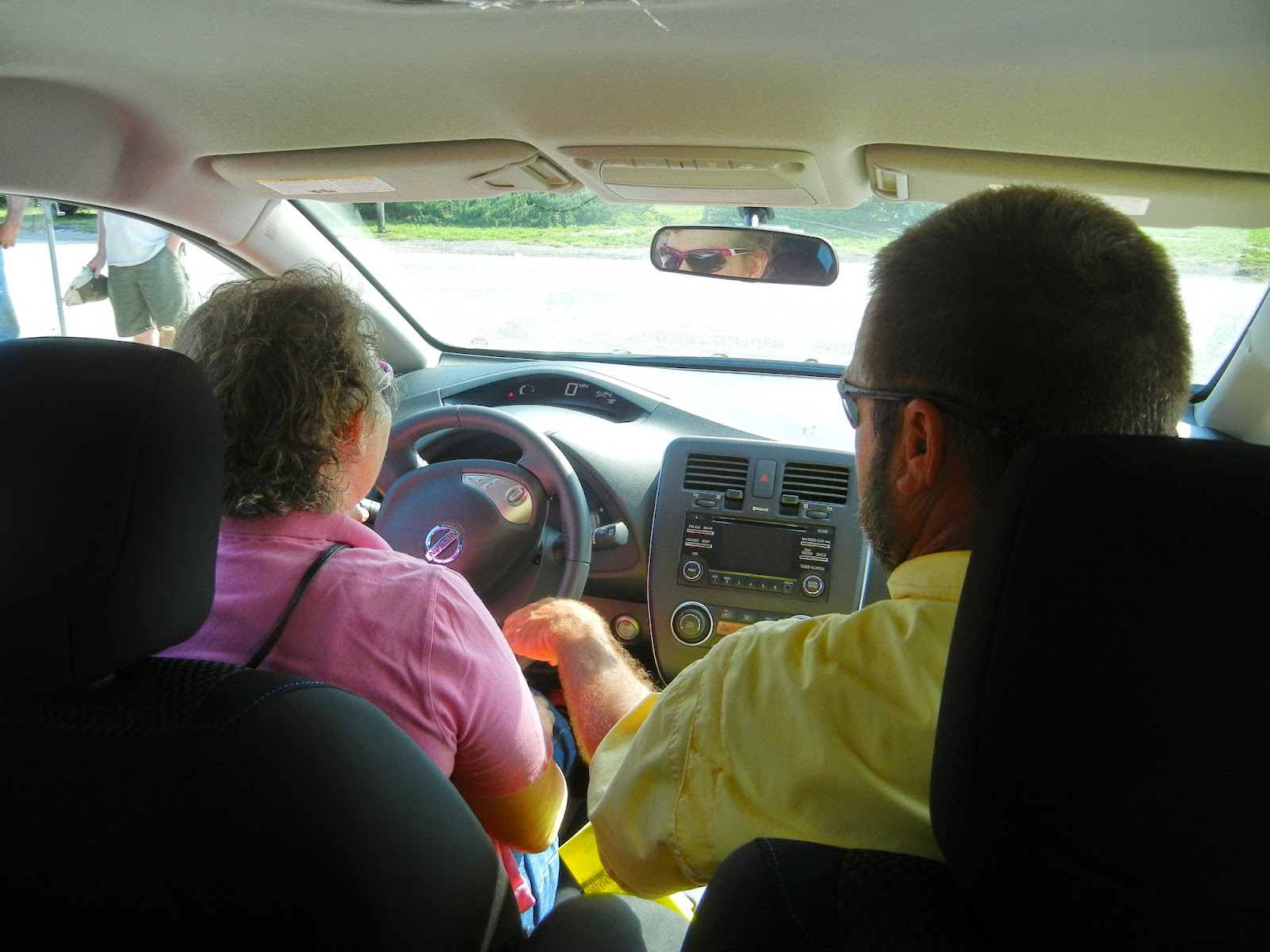 Here's the view from the back seat of the Leaf, and you can see that it's plenty tall inside, and it felt just fine back here.

My favorite car of the day, (but just barely over the Nissan), was the BMW i3.  I assume it's built in Germany, but no matter where it is built, it is now available in the US. Our demo guy pointed out that a lot of the interior (dash, seats) was made from recycled material, so along with not using gas, that's a plus for BMW. At their big factory in Greer SC, BMW makes their SUVs (X3, X4, X5, X6), and also use a lot of energy conservation such as generating power from land-fill methane emissions, and other environmentally friendly ways of generating power in the manufacturing of thousands of vehicles. You can read more about their factory in the US at this link: BMW US FACTORY 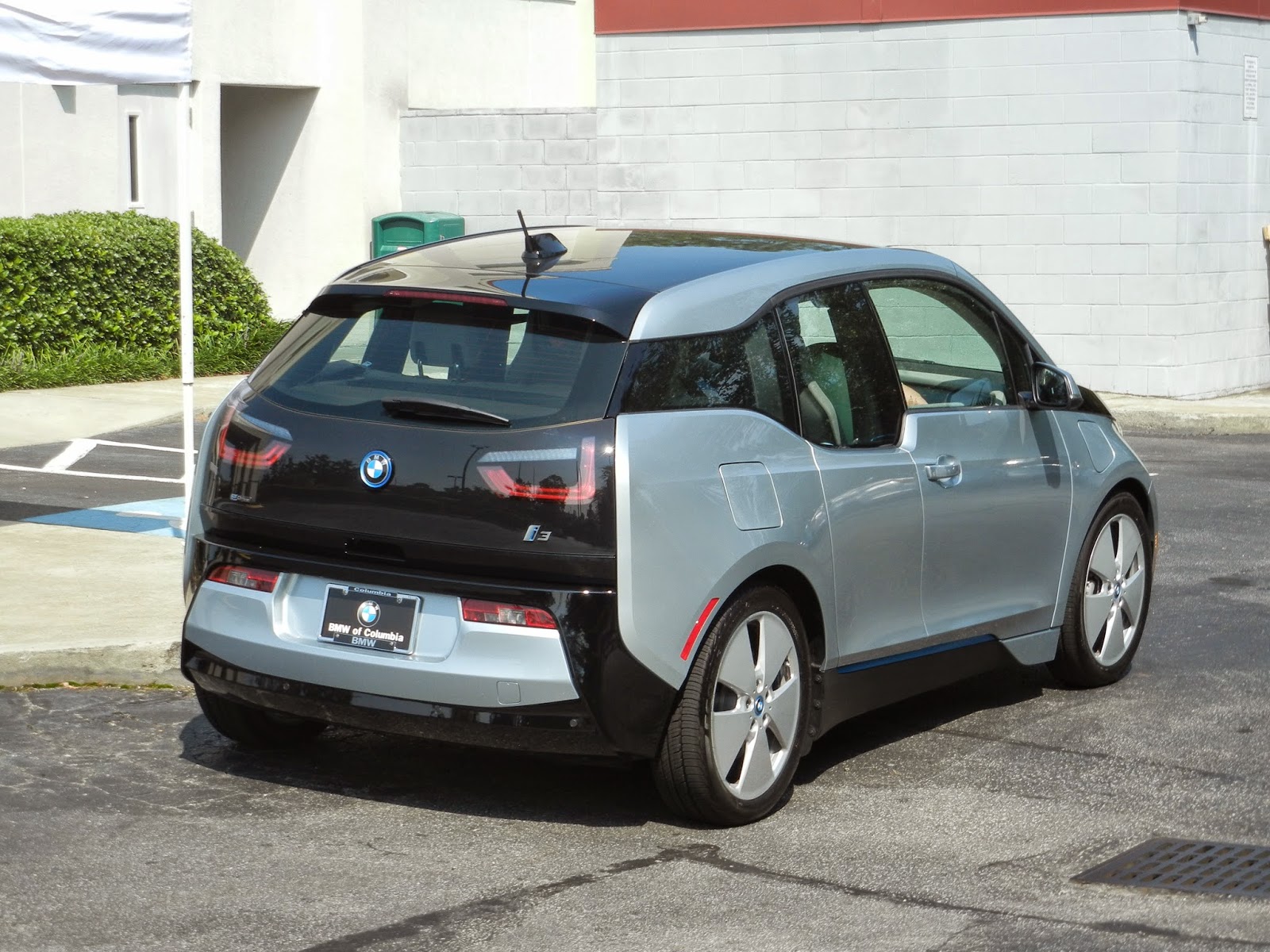 The front doors open normally, but there is also a smaller door in the rear to make access to the back seats easier. This 2nd door is hinged in back, like the recent Mazda RX-8 or an old "suicide door" Lincoln from the 60s. 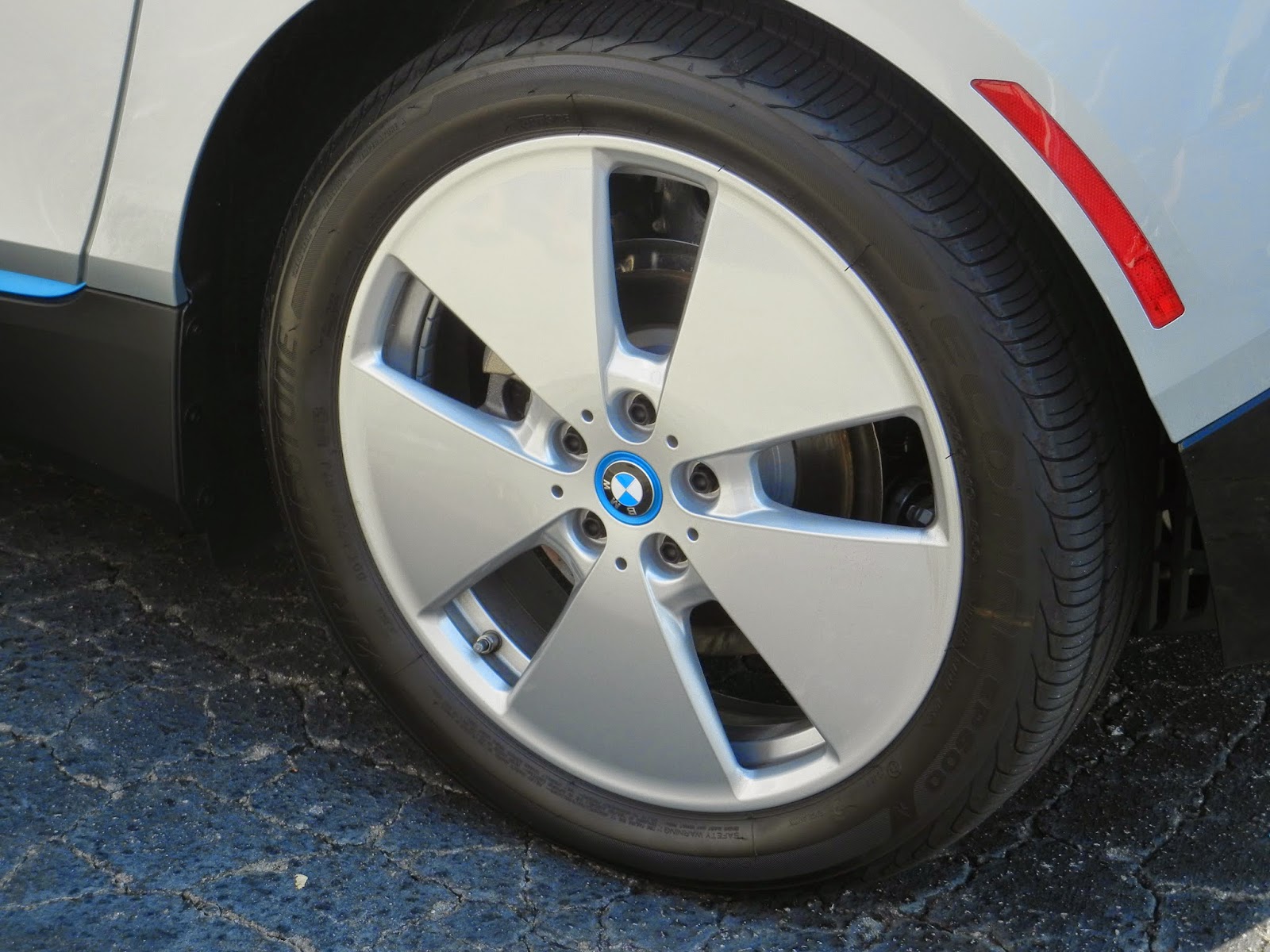 On the right you can see the wheel covers on the BMW, designed to reduce drag and improve mileage.  I think this car had the Bridgestone Ecopia tires built for less rolling resistance, again for better mileage also. They are pretty narrow tires, so you may not want to be doing serious auto crossing and drag racing on these tires! Brian might have pushed it a little going around a right hand corner on the test drive, so while the engine noise isn't there, the tire squealing noise works just fine! 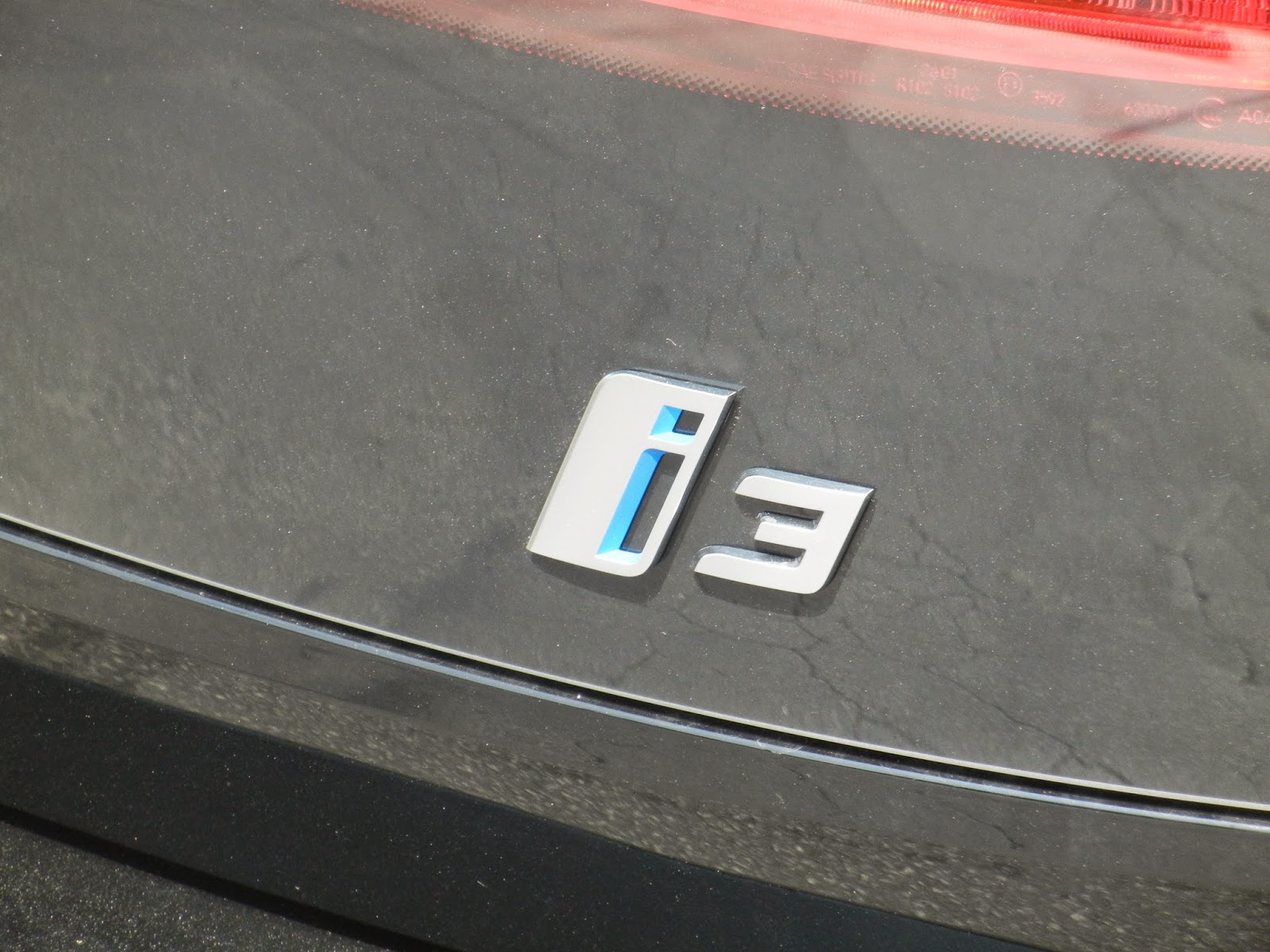 BMW  also has an awesome and really expensive all wheel drive hybrid, the i8 for only $135,700.  While normal people can't afford the i8, the i3 is downright cheap compared to that!If you're familiar with the BMW model numbering system, you've probably just realized that so far there isn't an electric or hybrid i1, i2, i4, i5, i6, i7, and i9.  Don't worry, I'm sure the Bavarians will get around to building all those eventually. Here you can see the dash, and that the shifter is up on the column.  Maybe you can tell that the top of the dash is recycled material, and the seats are made from recycled plastic too. They felt fine to me, and you can get leather seats as an option. 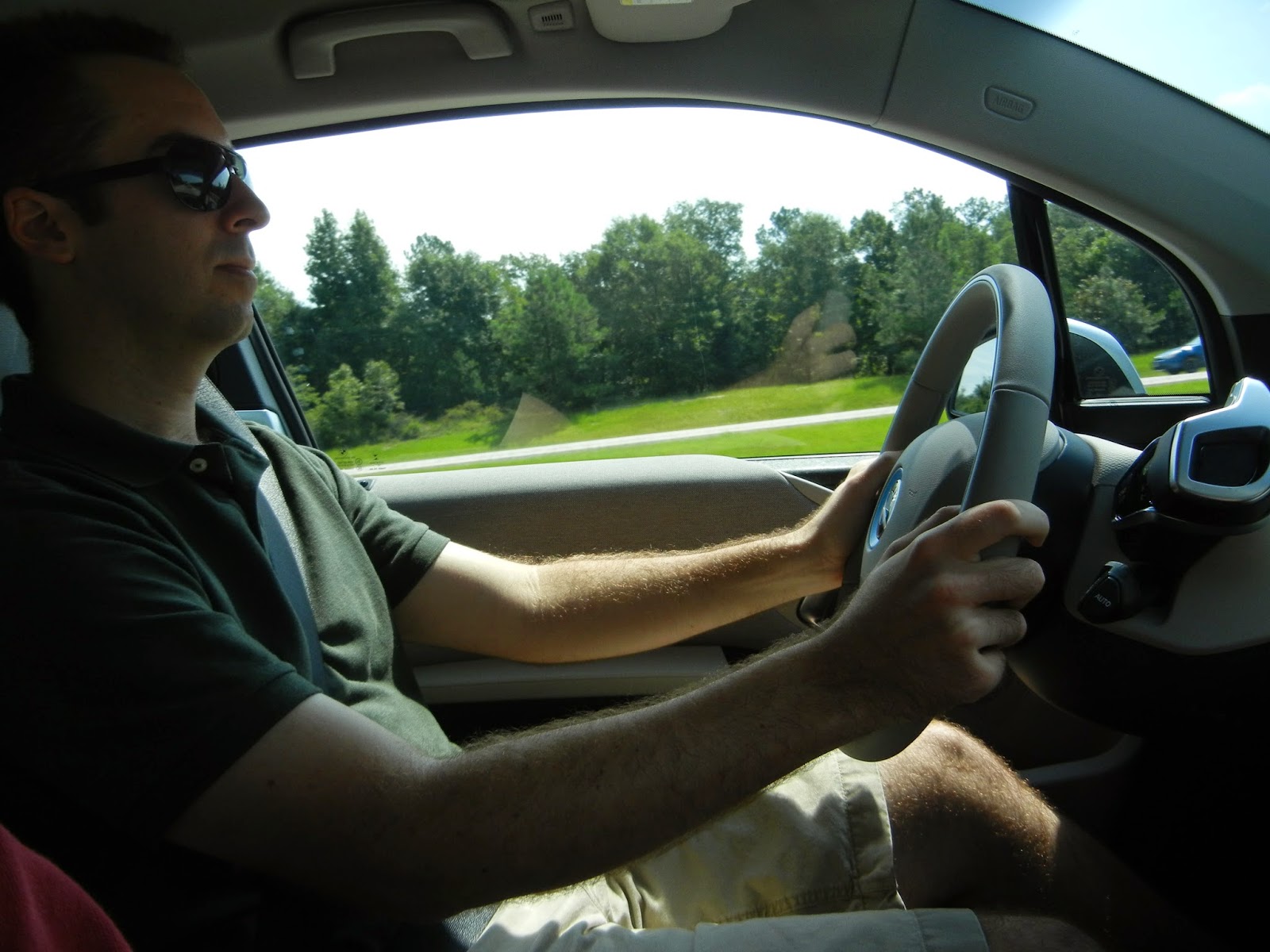 Brian is driving on the interstate here, and this car was, well, just like driving a car! Just a little road noise, maybe a bit more than the Leaf, but that road noise doesn't include the car's electric engine! The torque to accelerate onto the highway felt good from over here in the passenger seat too.  One other detail in this photo, you can see a "grab-handle" up above the driver's position. Hmmm. Over on the passenger side that makes sense, but I wonder how many drivers will be going so fast that they scare themselves and have to grab onto that handle?


To be honest, the reason you see handles like this on both sides of some cars has to be that the car can be built with either right or left hand drive.  At least let's hope that's the reason!


The other car I drove was the Chevy Volt, and it has been selling for a few years now, so it really felt like a normal car, drove smoothly, and offered plenty of torque. The Chevy seemed a bit larger than the other cars, and we learned that it has several modes for driving that will vary the amount of mileage you get by managing the engine and climate control systems. Unlike the all-electric other cars, the Volt also includes a small gas engine that will kick in to recharge the electric motor, and that extends the range of the Volt to much farther than the other cars. Bottom line, if you like the idea of a electric vehicle but want a car that can also be used for long distance trips and not just short trips, the Volt would be a great option.

In summary, after just a little experience driving three EVs today, I liked them more than I thought I would, and I'm sure the manufacturers have hit the nail on the head in making these electric cars drive just like what we're used to with our gas and diesel cars. We've only scratched the surface on these cars as far as all their features, so I hope you'll take the time to learn a bit more about all the other features they have (rear view cameras, bluetooth, low maintenance with no oil changes!, etc).
Posted by robert.a.nixon6@gmail.com at 7:19 AM