The old rock song "Dead Man's Curve" by Jan and Dean tells the story of the dangerous part of the road outside of town that has claimed many victims in car crashes. This song came out in 1964, and while I don't know how many times I've listened to it, well, let's just say that 50 years of this dangerous road is ENOUGH!

Unless it's the only road to get to a great BBQ joint, it sounds like a place to avoid if you ask me!  Looking deeper into it, a little research of 20 years of accident reports down at the highway patrol office now reveals that the number one reason of crashes at Dead Man's Curve is unsafe speed. Going too fast around the curve results in loss of steering control, exceeding the cars lateral grip limits, cars going off the road, and way too many accidents.

Can Dead Man's Curve be made safer? Here's a quick review of what has been done in the past.  The SLOW CURVE AHEAD sign with the big arrows and blinking lights that the county put up a few years ago hasn't helped any. The annual list of most dangerous roads in America still has Dead Man's Curve at #1, so that kind of repeated publicity isn't slowing anyone down. Even that summer when trooper Jones camped out down there every Friday and Saturday night didn't lower the accident count.

So much for the made up world of the song, let's talk about the real world now.  Just maybe, the basic design of the road is the problem. The narrow two lane road that goes near my house is one example of a dangerous curve, and this summer the county is making some improvements to make it safer. I thought it would be interesting to try and figure out what they are doing, understand why it will be safer, and walk along the road to shoot some photos to see what is up.

Here is a road near me that we will analyze a little bit: 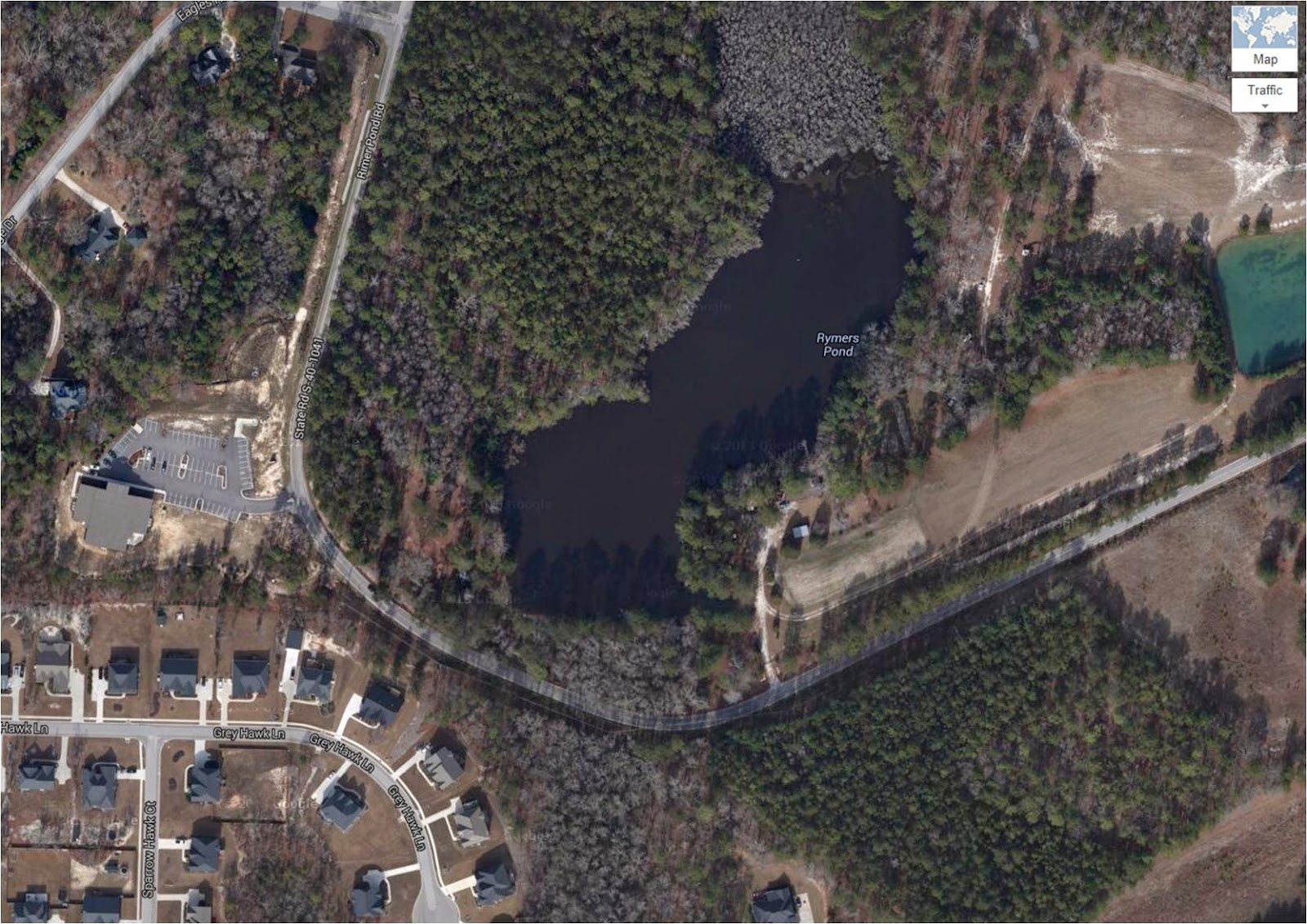 Starting on the right side and moving to the left, around the curve around the lake, then up toward the top is how we'll walk the road.  From the photo above it just looks like a big ol' curve, but once you see the elevation changes and how narrow it is, the danger is easy to see as you drive it. 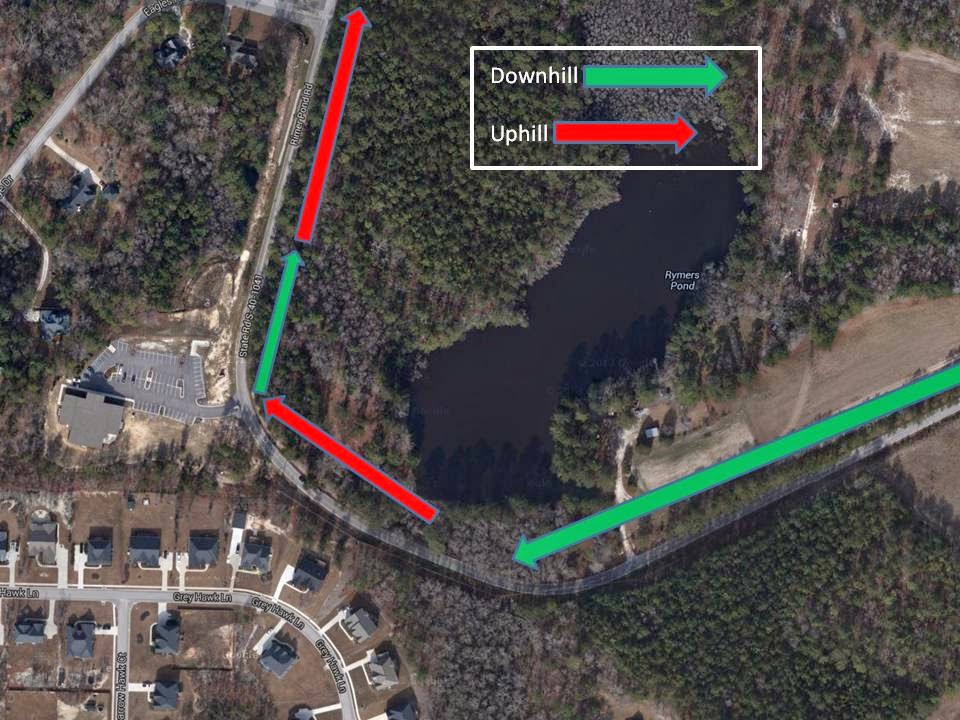 Ready?  Let's walk the road and see what we can learn: 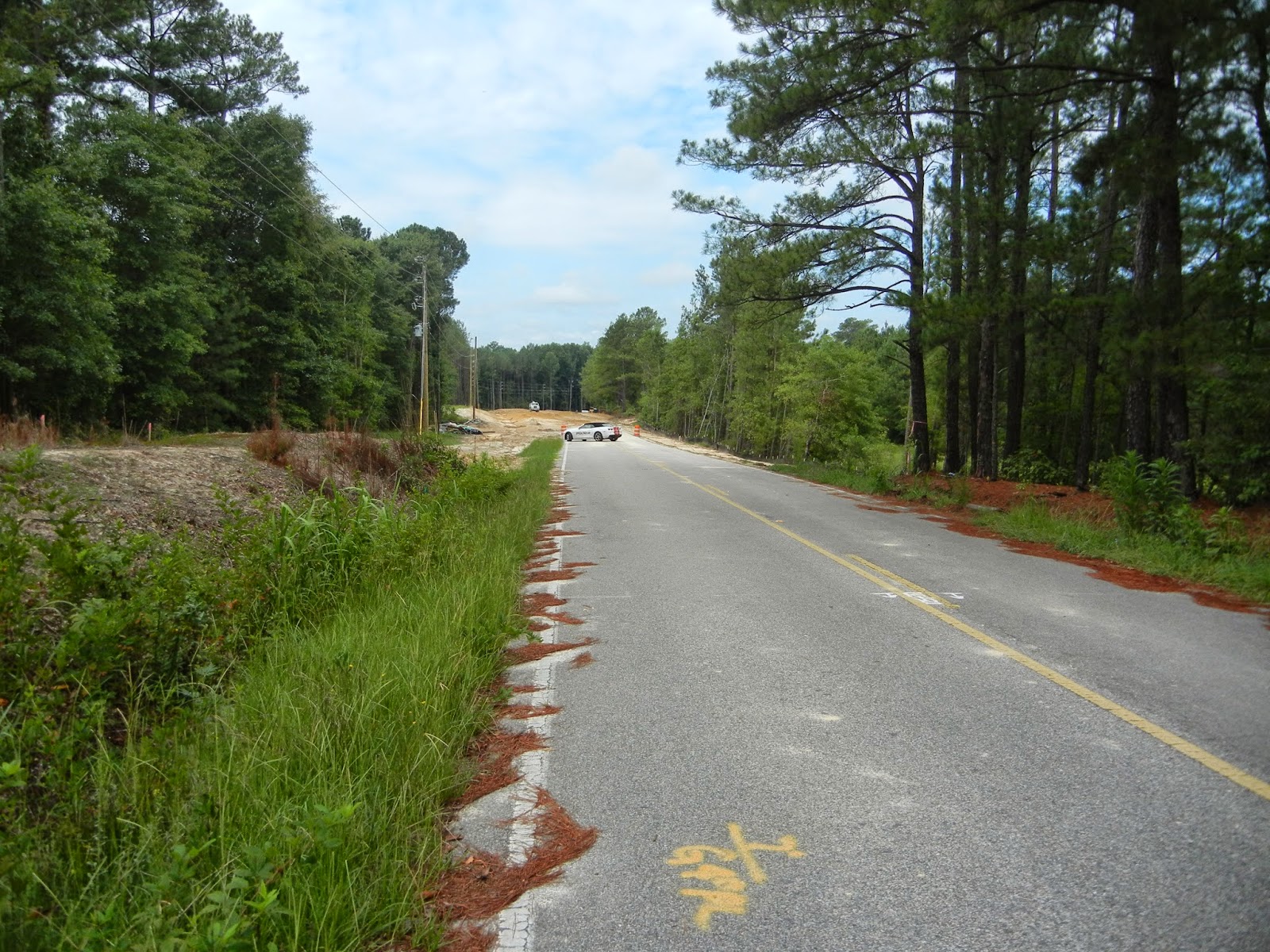 1.  In the photo above, we're heading down hill on the narrow two lane.  By narrow, I mean that you can see that there is maybe a couple of inches of road outside the white line. Keeping your car on the pavement is usually easy when you've got a bit of shoulder if you need it, but there is really no margin for error here. The pavement is mostly in good shape, but on the right side the hazard is a lot of trees. Sure, they give us oxygen, but they tend to get in the way and don't interact well with moving cars when a car leaves the road. The road really hugs the tree line on the right all the way thru this stretch, and that also cuts down on the visibility. This is what makes this curve dangerous is that most of it is blind: you're driving into it with no idea of what is coming ahead. Imagine driving a bad stretch of road at night or in rain. That doesn't  help.  Let's go down by those orange barrels next. 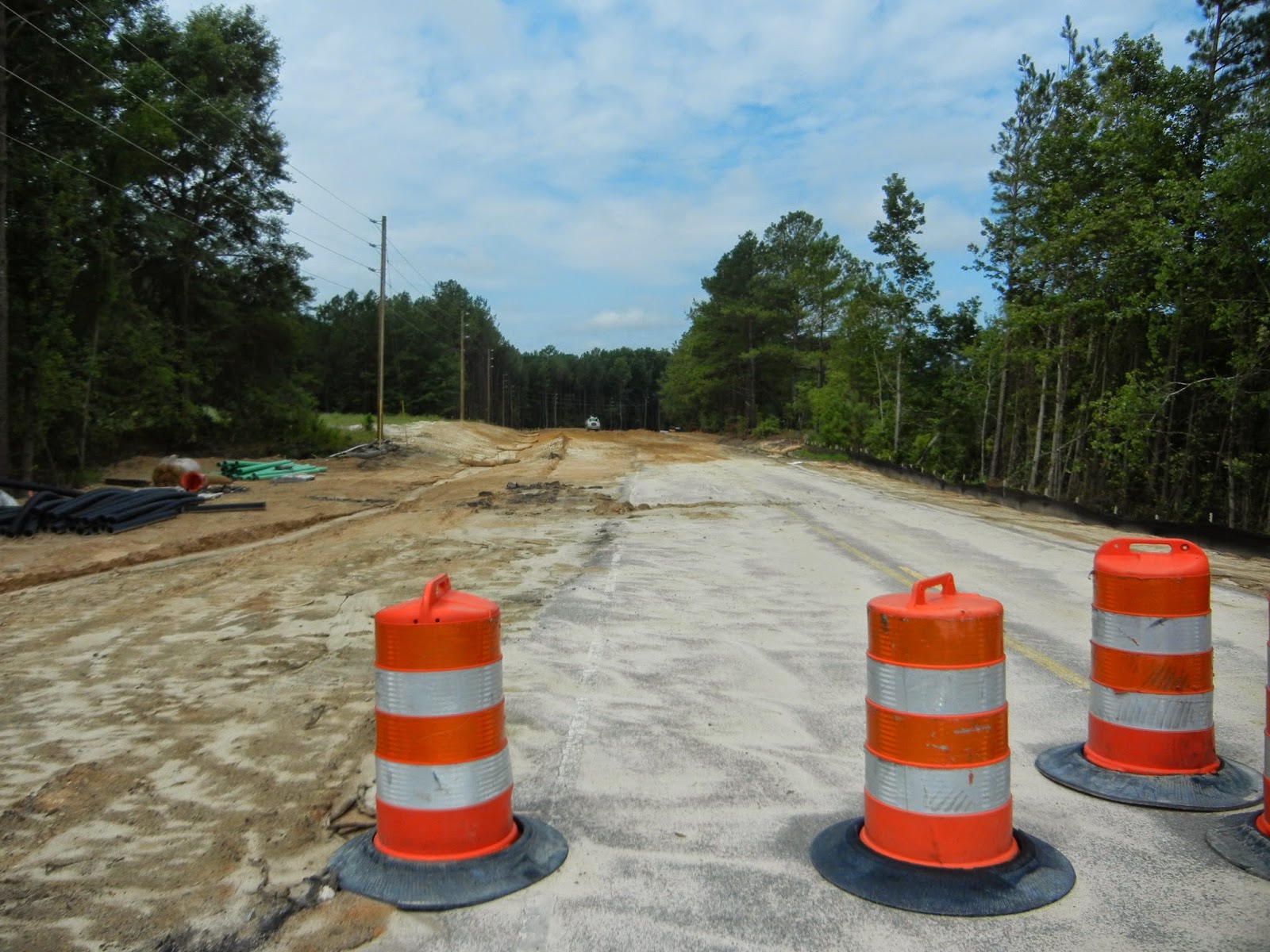 2.  Now we're farther down the hill, and here you can see the fresh grading on the left, which is where the new road will go. This does a couple of good things, like getting us away from the trees on the right, and opens up the view ahead just a bit so that drivers can better anticipate what comes next. It will also make the upcoming curve a bit more gradual, and that should mean safer. Amble on down by the white water truck with me. 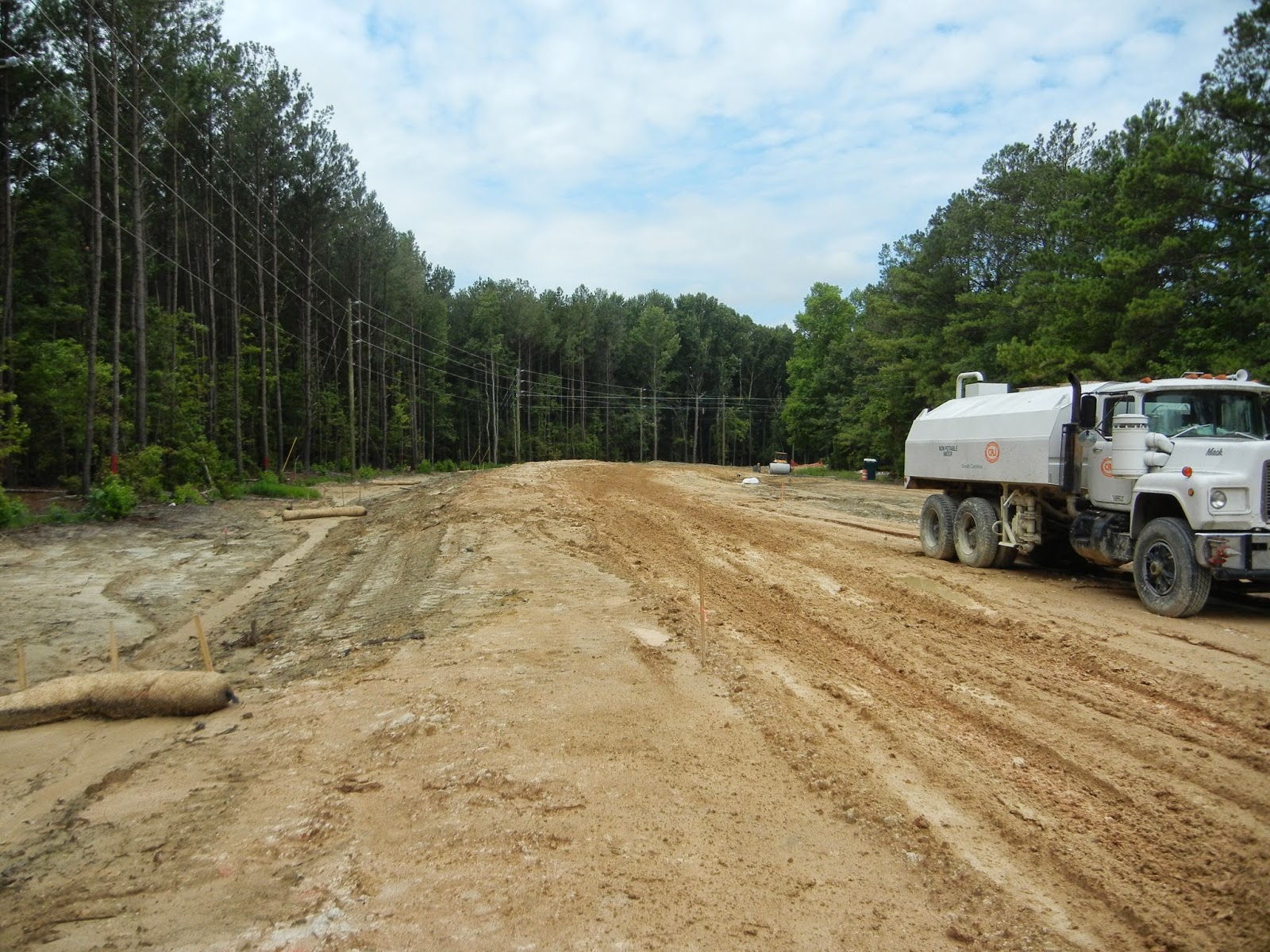 3.  Still going down  hill, now over where the new road will be. Looking ahead, you can probably tell that the road will curve to the right, thanks to the opening in the trees, the newly relocated power lines, and the curve of the road.  Now just imagine your line of sight if you were under those trees on the right, on the other side of the white truck, where the road used to be.  You would see even less ahead of you, so this wider curve looks like a great improvement for safety!  Next stop, a bit closer to the piece of cement culvert up on the right. 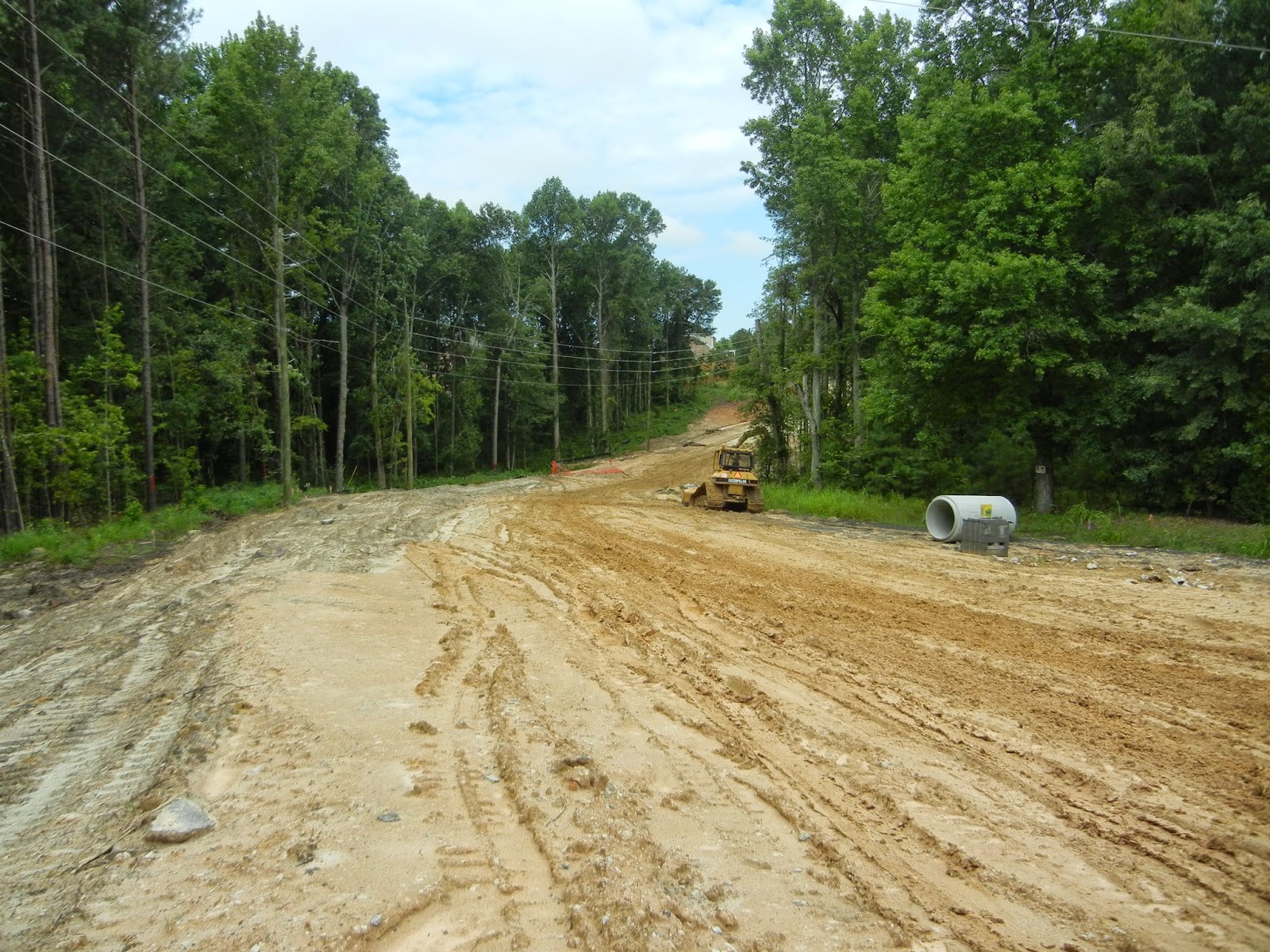 4.  Past the truck, now we can see more of the curve, and that we will be going uphill soon. All the downhill up to now would be great if you were a race car driver, since this adds to the speed, but for everyday driving, it probably adds another hazard to an unaware driver. At the bottom of the hill, the road goes over a creek that drains a pond on the right. The end result of that is that the road will remain pretty narrow down here at the low spot, since I don't see any signs of a new big fat wide bridge being built.  Even making the road safer is still limited by the hills and water in the area. Onwards to the bit of orange fencing up there. 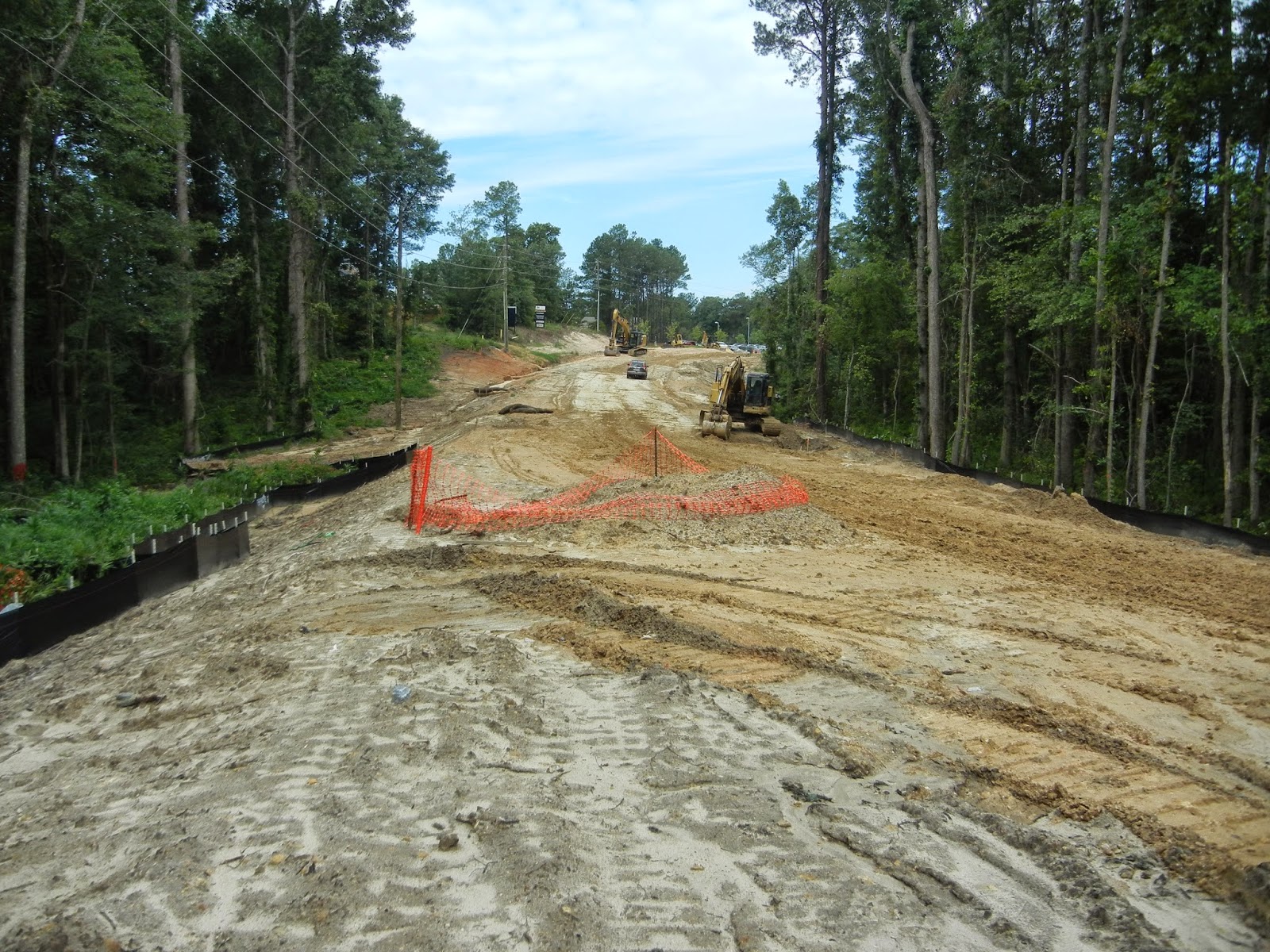 5.  Now we're at the bottom of the hill and looking up. The road is a bit straight here, so that's safer than the curve we just came thru, but now we're realizing that after this uphill bit that the road will curve to the right. Again, with all those trees on the right our vision is limited. The drivers in NASCAR don't have to worry much about the road ahead, since they're driving the same route hundreds of times in a race, but for the rest of us we get one chance to go down this road safely or we (cue the music) "...won't come back from Dead Man's Curve". 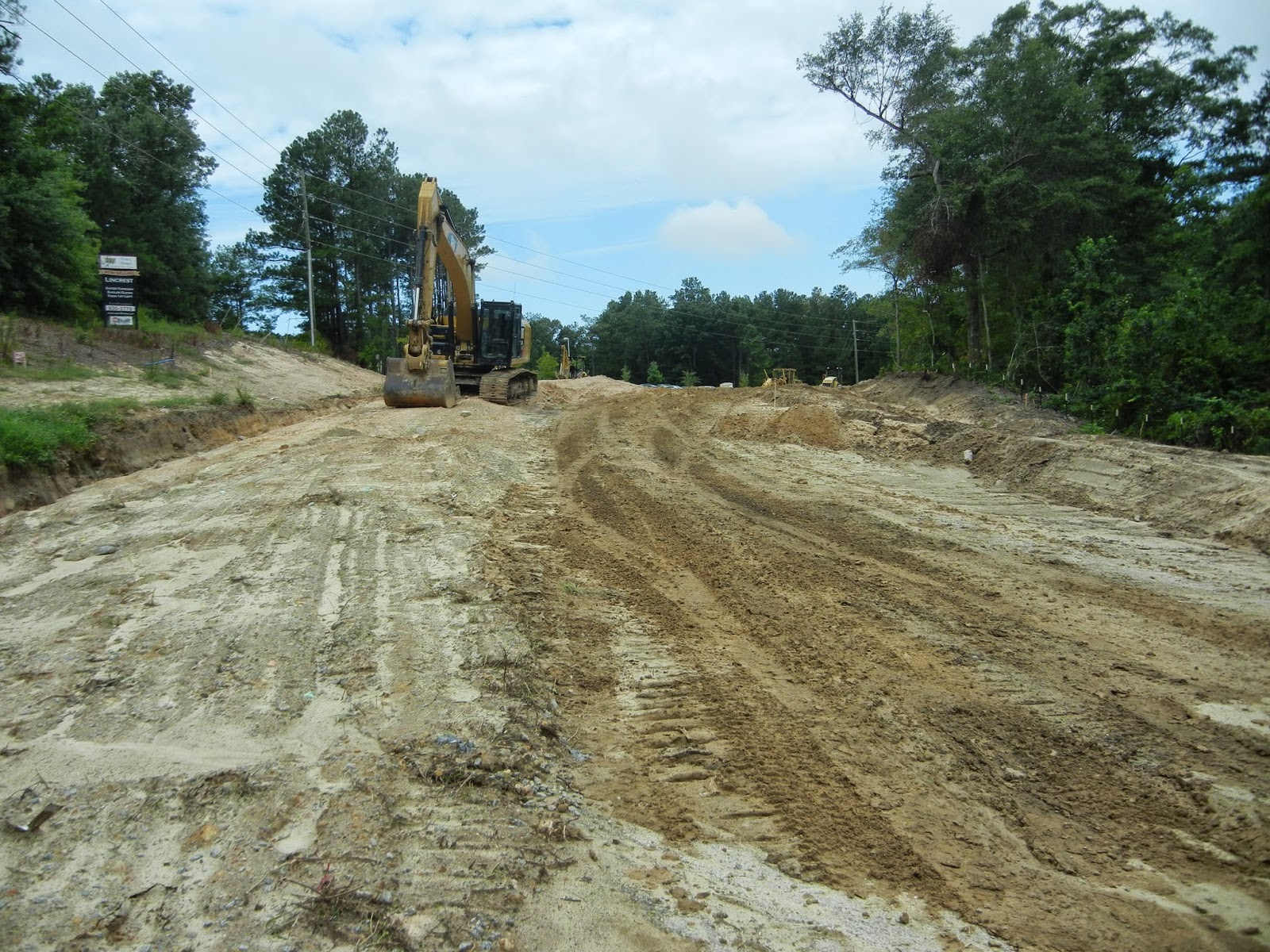 6.  This view above is very similar to #5, but now that we're approaching the crest of the hill, our vision is further cut down and we can't see over the hill at all.  Unless you noticed before now, there is a church on the left at the top of the hill that adds to possible traffic ahead. This part of the road always made me slow down, since there just might be some other driver coming at me from the other direction, and he can't see me either. The narrow road means that if the other guy is even over the center line a bit, my day is about to get really bad. The good news now is that the right side of the road has also been opened up, lots of trees taken out, and the ground there has been smoothed out, so I can see a lot more in front of me here. Let's get up to the highest point next. 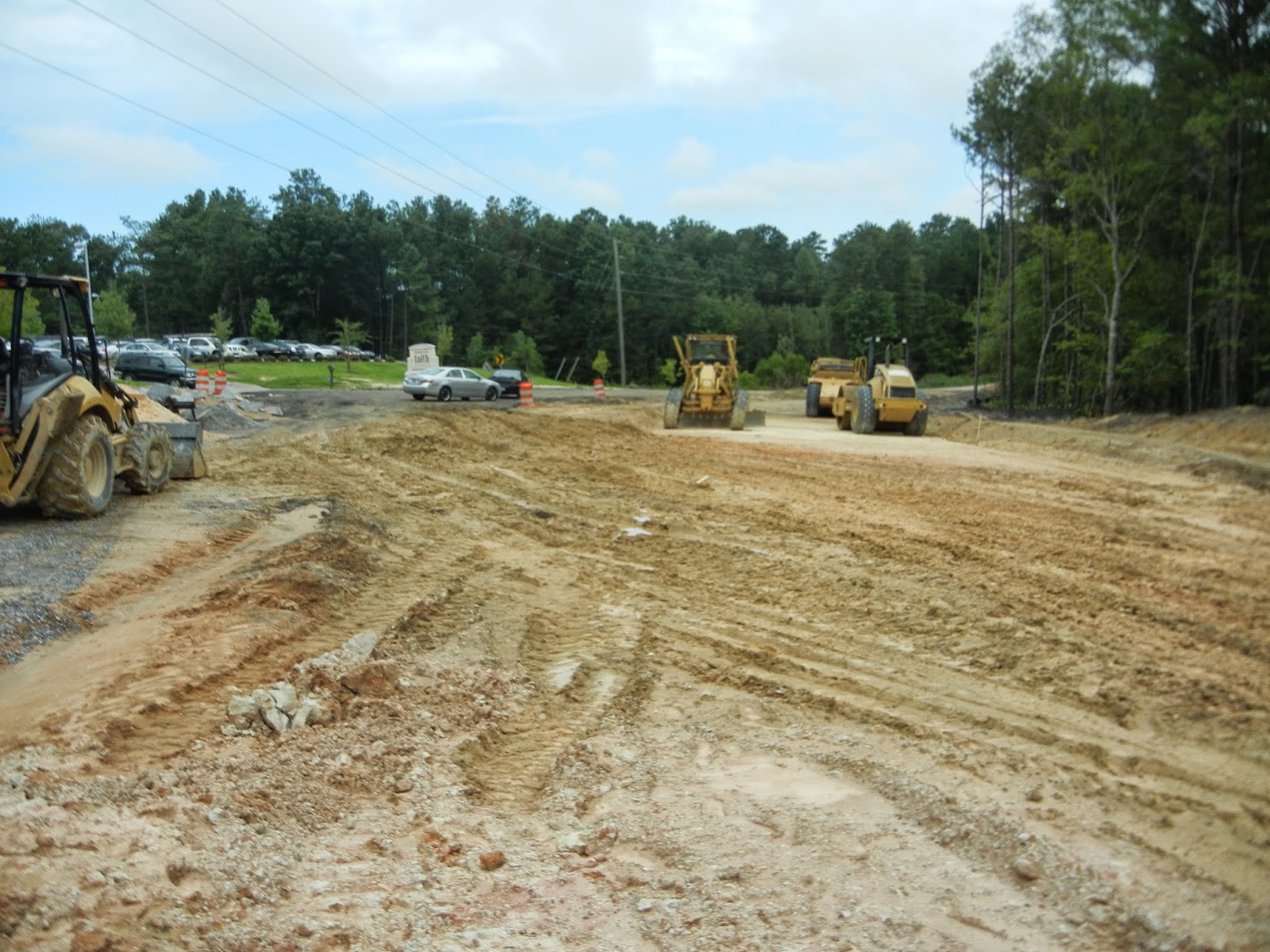 7.  Now we're at the highest part of the hill, closing on the church entrance on the left, and those earth movers over on the right have really leveled things out. I'm not sure yet if the road will be in a new location over there, or where I'm standing as it has been. This was the sharpest part of the curve before, so hopefully they make it a more gradual bend, which should make it much safer. Previously the section on the right was also higher and filled with trees, so again, much worse for seeing what's up ahead. Take a few more steps with me to the church entrance on the left past that tractor. Final stop ahead, down to the next low spot ahead. 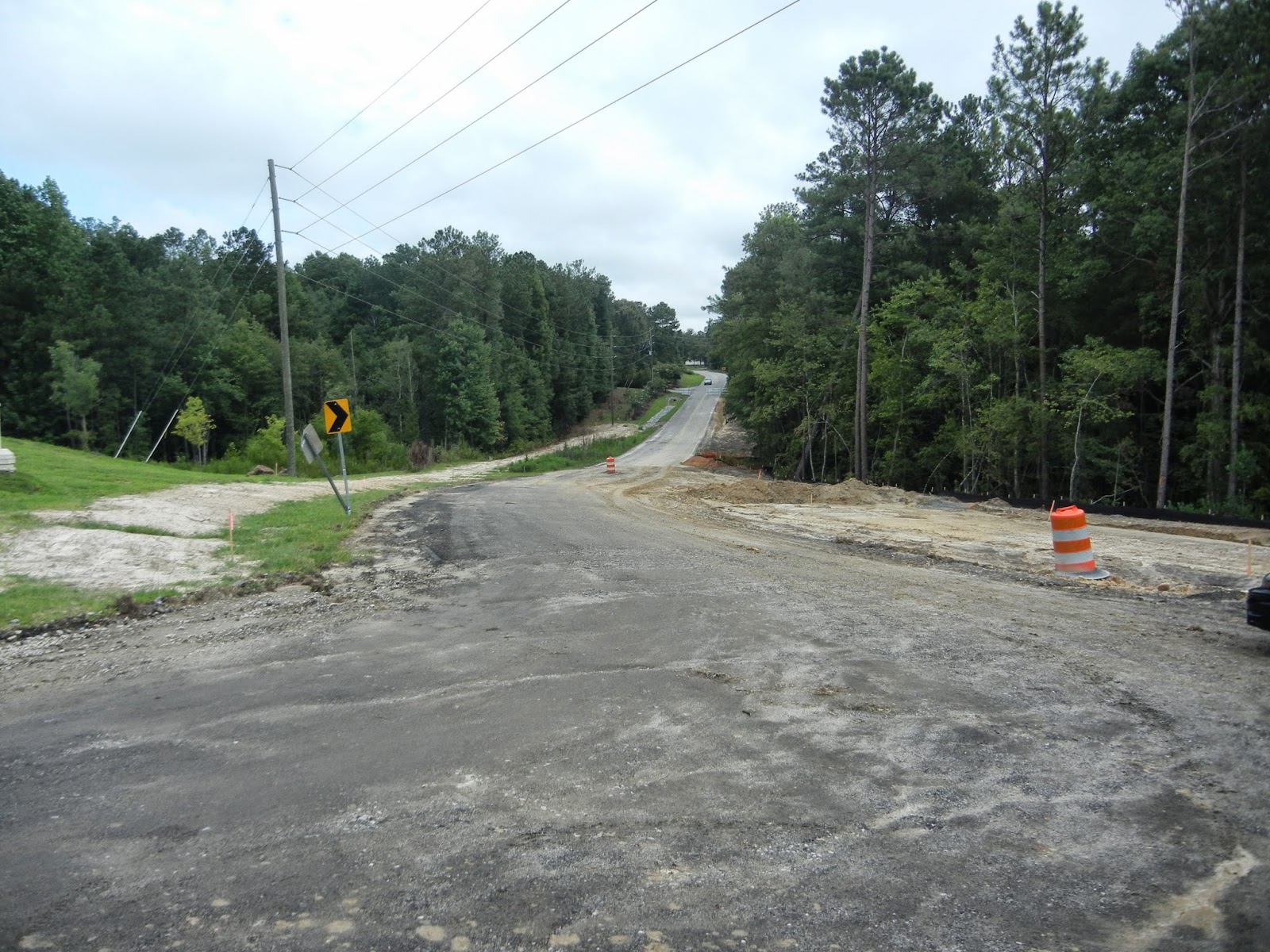 8.  Right at the church entrance now, and of course this makes life even more interesting driving on this blind curve with the added risk of slow moving cars entering or exiting the road. On top of the blind curve, bad visibility, slow traffic, and oncoming traffic, the one last hazard in the worst part of the curve has been on the inside lane- the pavement had a series of potholes.  Sure, one pothole in the middle of a 10 mph parking lot is something you can avoid, and one pothole in the middle of the interstate can also be missed because you have other lanes to use, but ONE pothole right where your tire HAS TO BE on this blind-curvy-hazardous spot is really bad! I've hit the pothole a few times and can always feel the car losing grip and sliding a bit sideways (and into the oncoming lane). All new pavement will take care of that problem!  Oh, one more hazard:  the uphill to the apex of the corner then dips downhill as you are in the middle of the curve, which tends to throw off the balance of your car and affect the suspension and all that cool gravity/physics stuff that comes into play with operating a car safely. 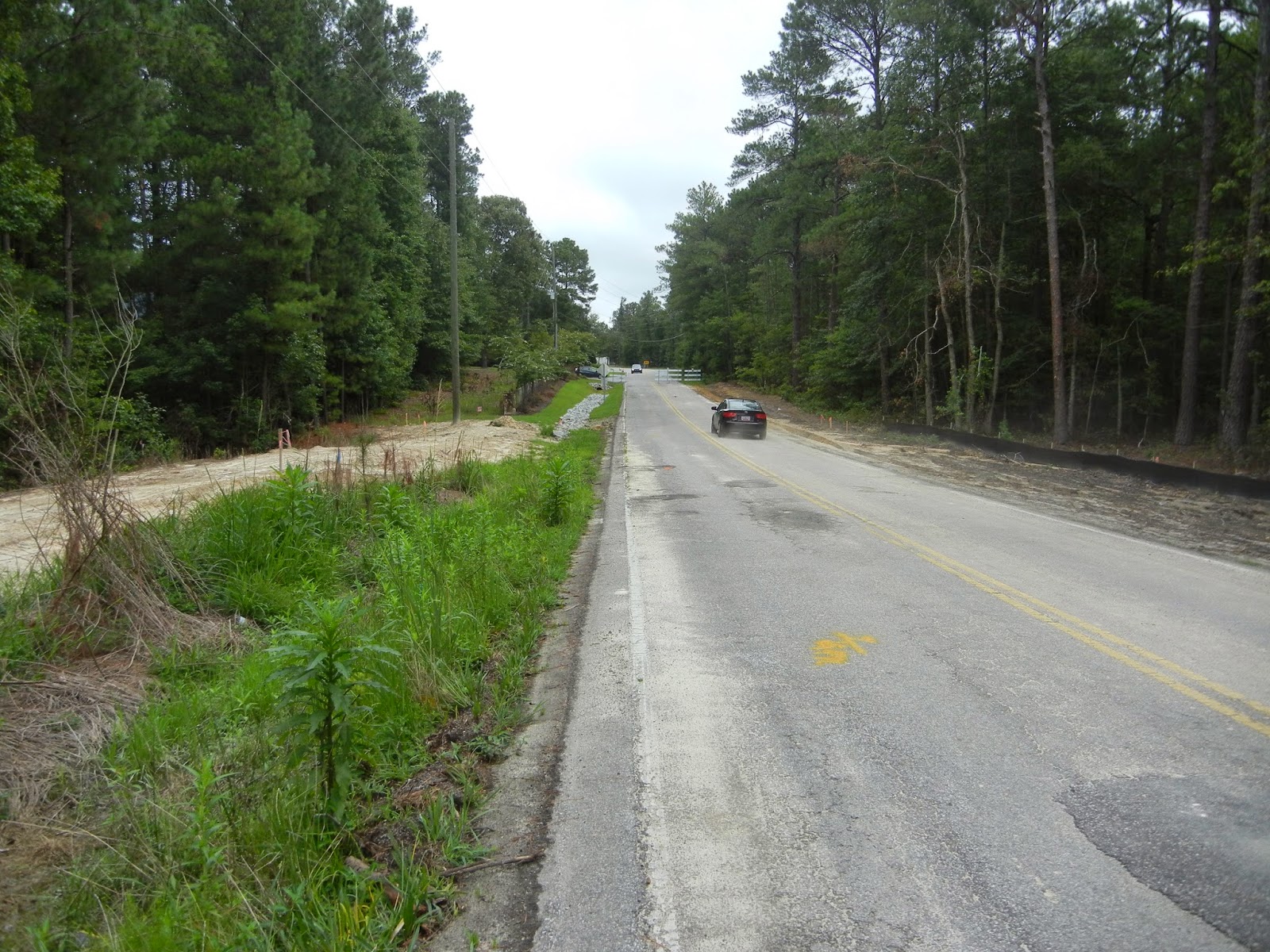 9.  So we've made it around the corner, and are now ready to head uphill, so other than pointing out that the entrance to my neighborhood is up there on the left (which adds more traffic into the Dead Man's Curve section), herein ends the tour of the construction that will make just one little part of the world a little bit safer!  I don't know how much this construction costs, but after seeing several cars off the road in this particular curve over the last five years, I'd say it's tax money well spent!
Posted by robert.a.nixon6@gmail.com at 8:52 AM