As they used to say on the Monty Python's Flying Circus show: "And now for something completely different!" Our local Porsche Club of America (NY Metro Region) is kicking off 2022 with a fun Rally, and NMS will be there on February 6th. I've never done a Rally event before, so why not? More info at: SNOWFLAKE RALLY

Road Rallies, from what I can tell, are fun events where drivers and their navigators drive the same route on public roads, at staggered intervals. The team attempts to work together and follow the specific time/distance directions given to them, and at various times on their journey on an unknown route, they will be checked for accurate time, ideally hitting checkpoints at the time appropriate for their depart time and driving instructions.

What kind of cars are entered? Glad you asked! So far it's mostly Porsches, and a lot of various 911 models: 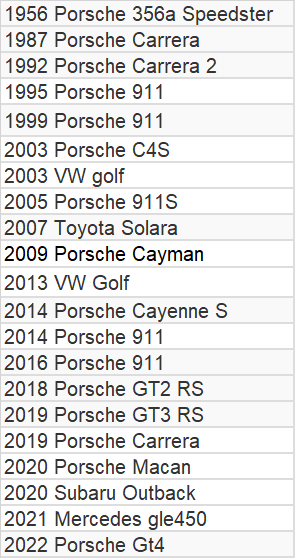 According to the club website, this is the oldest Rally of it's kind in the Porsche USA world, so that sounds good to me! For some reason, there seem to be a lot of Porsches around New York City, and I'd have to guess that this is one of the biggest Regions in PCA. No wonder the first Porsche dealer in the US was a guy that lived on Long Island, and that events like this have been around longer than I've been alive.

From what I can gather, the instructions might say "head east at 45mph for 9 minutes, then head southwest for 2 minutes at 30mph, and then..." type of guidance. My guess is that we won't win, but that well have more fun than anyone, and that sounds like a pretty good prize! Hey, what else do you do on the Sunday the week before the Super Bowl?